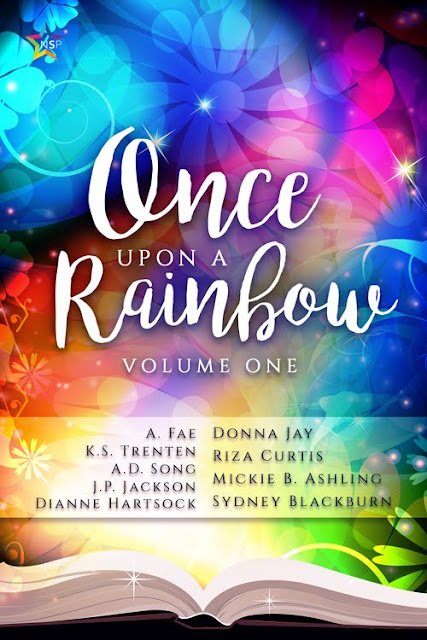 
Your favorite stories from childhood have a new twist. Nine fairy tales of old with characters across the LGBTQIA+ spectrum.

Fairest by K.S. Trenten – What will you change into?

Gingerbread by Riza Curtis – A night out to die for.

Sleeping Beauty by A. Fae – United by true love’s kiss.

Little Match Girl by Dianne Hartsock – Falling in love with the Little Match Girl was easy, but now Christian is determined to help Dani find his family, even if doing so means he might lose him forever.

Hood’s Ride is Red by J.P. Jackson – A red car, a werewolf, and a trip to grandpa’s house – this ain’t your usual Little Red Riding Hood.

The Gingerbread Woman by Donna Jay – When Candace sets out for a weekend of solitude she gets far more than she bargained on.

White Roses by A.D. Song – A kiss to break the curse…or continue it.

Once Upon a Mattress by Mickie B. Ashling – Will Errol spend a miserable night and prove his worthiness or will Sebastian have to keep on looking?

Tariq is a devoted apprentice to his master, even stealing a perfume jar for Malik, the man he secretly adores, with only a twinge of guilt. But when Malik seeks to use the Jinni bound to the stolen jar, Tariq learns what love is—and isn’t. Ridha has given Tariq five wishes, two of which remain, and the one Tariq wants most, he cannot have. Or can he?

All of my life, I’ve been haunted by her dark eyes. At birth, she cursed me to prick my finger on the spindle and sleep for a century. She appears in my dreams, my reflections, shaping my desires. Who is she? My guardian has only revealed a few enigmatic words as to her identity, the fairest of them all. Follow me into the lonely Forest of Tears where the dwarves dwell, walking where she once walked. Gaze into the depths of the magic mirror, which reveals her secrets. For I refuse to fear her, even if I should.

When a dozen gay men go missing, the Supernatural Investigations team is brought in. With the trail running cold, werewolf Detective Erik Stuart is sent undercover with fellow officer Noah Coleman to investigate exclusive gay club Gingerbread. As their friendship blossoms into romance, danger puts their very lives at risk. Are they powerful enough to survive and bring justice for the missing men?


Sleeping Beauty by A. Fae

Two royal births: one born into the body of a prince and the other a princess, bodies betraying their true identity. They grow to be inseparable, both deciding to become their true selves as soon as they are able. But an ugly curse by a wicked godmother brings them to the brink of disaster. And only through true love’s kiss can they be united.

Christian can’t help himself. He’s fallen in love with the sweet, sometimes effeminate guy who’s been coming into the sandwich shop for the past several months. But Dani is also the Little Match Girl, the ragged queer selling candles on the street corner Christian’s been avoiding all year, going so far as to cross the street to avoid walking by him. Ashamed, he wonders if Dani can ever forgive him. Losing his mother to cancer, Dani has spent the last year in a haze of grief and loneliness, selling Mother’s candles like they always had, giving himself to any man who can pay, saving him from having to go home to his father’s brutality. Desperate for a place to belong, he sets out with Christian to find his mother’s family. Christian helps, wanting Dani to be happy, though the cost might be losing his sweet lover forever.

Harkin Ross, otherwise known as Hood, hasn’t exactly had a happy childhood. His mother died in childbirth and his older brother perished in an unusual accident on the family farm. Hood’s father hasn’t coped well over the years and he’s spiraled into a black hole of anger, alcoholism, and abuse. But when Kenneth Lowell is hired as the family farm hand, Hood’s life vastly improves. Kenneth earns Hood’s trust, and friendship while teaching Hood some basic mechanics skills, helping Hood get his red Dodge Dart up and running. Kenneth, however, is hiding a violent and primal secret of his own. When Hood’s father discovers the Hired Hand is doing more than just yard work, the weekly trip to Grandpa’s house goes all to hell.


The Gingerbread Woman by Donna Jay

Looking forward to a weekend of solitude, Candace heads to her country cottage hoping the peaceful surroundings will help to get her creative juices flowing. Never in her wildest of dreams could she have envisioned the events that unfolded.

One night in the dark woods, a faerie attacks Lady Iliana and curses her to slumber forever. Lady Iliana finds herself kissed awake by Lord Alexios. When Iliana meets Adara, Alexios’ sister, Iliana finds herself torn between the man who saved her and the woman who hides secrets about Iliana’s awakening. When Alexios turns on Adara, they discover Lady Iliana is stronger than anyone thought. She does whatever she has to do to save Adara…even if it means killing her again.


Once Upon a Mattress by Mickie B. Ashling

Crown Prince Sebastian of Sendorra has shied away from his obligations to marry and produce the requisite heir. He wants a love match—complicating an already difficult situation—and insists on finding the right man; someone willing and able to carry his child with medical intervention. The Royals throw a ball and invite eligible bachelors from all over the world. Errol Maitland, a famous sculptor who lives in the small Principality, is tired of random hookups and relationships that fizzle out before they get started. He’s intrigued by the Prince’s invitation and decides to attend the ball. Sebastian’s mother belongs to a clan of powerful witches. She’s convinced that a touch of magic will ease the selection process. Placing a spell on an ordinary pebble, she tucks it underneath Sebastian’s mattress. The right choice will voice a complaint. Will Errol spend a miserable night and prove his worthiness or will Sebastian have to keep on looking?

Erik pondered the question for a moment. “Homophobic supernatural asshole?” The suggestion hung in the air while he studied the whiteboard once more. A dozen photographs of young men covered the surface, held in place by magnets. Handwritten notes in several different styles filled the empty spaces. Erik had stared at the board so many times he could recite the names and comments by heart. Studying the notes did no good.

“So we have a dozen young men who just disappeared over the last two months without a single trace?”

Erik turned his attention to Michaela “Dragon” Lawson, who had asked the question.
Skepticism dripped off her every word. Michaela was the hard-as-nails head of Supernatural Liaisons, the unofficial government branch for dealing with the other kinds.

“No bodies have turned up, and there’s been no contact with any of the men.”

“Well, do we have any leads?” Michaela aimed the question at the room in general, spitting out the words as was her habit. There was a rumor circulating that she was either a dragon shifter or some kind of robot. Erik glanced around the room, but the team was carefully avoiding eye contact.

“How about cyber?” Michaela’s voice sharpened further. Erik winced. Michaela was not happy, and he preferred his balls attached to his body.

“Well, get on it faster. I’ve got the mayor riding me over this after those stupid humans spent eight weeks failing to get anywhere.”

Erik watched Michaela storm off and barely resisted the urge to huff out a sigh of relief when the door slammed behind her.

“We better bust our balls over this, boys and girls, otherwise the Dragon will eat them for breakfast,” Alice, the team lead, cautioned. Erik was glad to hear he wasn’t the only one thinking along those lines. “Silas, you’re profiling these men. Talk to Noah if you think it’ll help. Craig, you need to find something on their PCs, anything that these guys have in common. Erik, you’re with me.”

Erik rolled his eyes and let out a theatrical groan at her command.

“Erik Stuart!” Alice barked. “Don’t be like that.” She narrowed her eyes and plastered on an angelic-looking smile that was all teeth. “We’re doing social media.”

Erik moved to sit at the desk beside Alice, his half-finished coffee placed near one arm, precariously close to several piles of paperwork. They divided the men between them to study. Craig would look at the bigger picture, slowly chewing through all the data they had accumulated, while Alice and Erik would look at the human side. Going through victims’ social media was both fascinating and disturbing. He hated this part. Some of these guys were just kids, and each photo and post online was a little window into their life—their thoughts and feelings, their hopes and dreams as they showed them to the world.

“Anything?” Alice’s voice drew Erik out of his thoughts and away from the profile page he had been staring at.

“Nothing.” He shrugged and glanced at the clock. How had that much time passed already? “Maybe we’re going about this wrong?”

Alice tilted her head in an invitation for him to continue.

“Maybe there’s an outside connection?” Erik suggested. “They’re all male, right, and they’re all gay? Maybe it’s a real-life link like they met at Pride or at a club or something?”

“I’d bet on the club.” Craig leaned against the doorframe, a cocky grin on his face.

“You found something,” Alice stated. Her eyes lit up and a ghost of a smile graced her lips before she was all business once more.

Craig nodded. “It’s early days,” he warned, “but every account makes references to a new club.”

Alice stood up and kissed Craig’s cheek. “Excellent start!” The team lead walked away, leaving Craig gazing after her. Erik waited for Craig to realize he had been caught staring and waggled his eyebrows. Craig flushed red.

“Shut up, Stuart,” he hissed. “I’ve seen you eyeing up a certain geeky witch.”

Erik laughed at the barb but didn’t bother to deny Craig’s words.