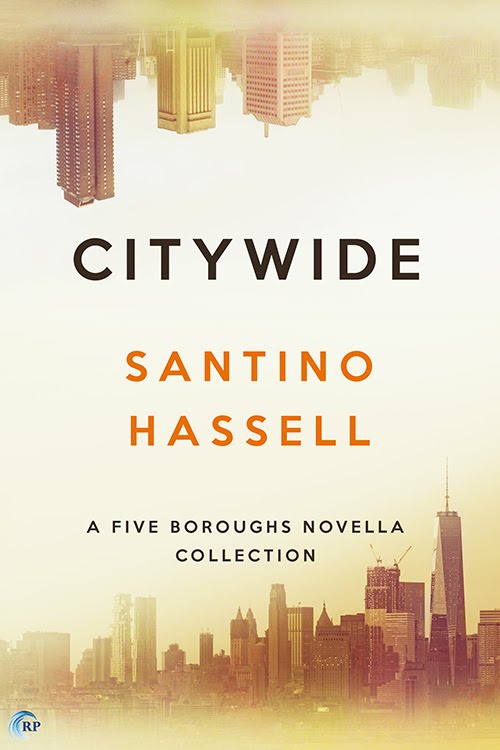 A record-breaking heat wave engulfs the Five Boroughs, and emotions run as hot as the temperatures.

In Gridlocked, former Marine Tonya Maldonado is keeping real estate heiress Meredith Stone on permanent ignore. Mere isn't Tonya’s type. Not even close. Who cares if she kisses like a dream and has the filthiest mouth this side of the East River? But then a security detail at a summer party ends with her saving Mere's life and discovering they have more chemistry than she’d ever imagined.

In Derailed, Stephanie Quinones escapes the heat and her complicated love life by going on a company retreat. Trouble is, it's a couples’ retreat, and she lied about having a boyfriend. Unfortunately, the only person willing to play pretend is her on-again/off-again fling, Angel León. They’re currently "off again,” but after a week in the woods, Stephanie realizes she wouldn’t mind them being permanently on.

Somewhere around the time the photographer arranged us for a group shot, the lines started blurring between the Queens crew and the Manhattan crew. I had problems wrapping my head around not being included on the Queens side.

Sure, I was poly as fuck, in an open marriage, and partook in activities at exclusive sex clubs with Manhattan’s elite, but at my core I was still the kid from Edgemere Houses in Far Rockaway. The kid who’d come up surrounded by drug dealers and drug addicts, and who’d been taken in by Aiden and his mom at fifteen. I’d been feral. I was still a little feral.

Sometimes, I wondered what my new rich friends—Ashton Townsend and Meredith Stone, the celebutantes and billionaire heirs—thought of my background. Most people I’d met after leaving the Rockaways had just assumed things. Because Aiden’s father was one of the richest people in the city, I’d found myself constantly surrounded by the mega wealthy. I also now wore designer clothes priced far above my income. As a result, I’d been labeled as yet another privileged rich guy.

I had the feeling Ashton and Mere were just too polite to ask about my past and my parents, considering the complex relationships they had with their own. Stephanie Quinones, one of the Queens crew, had pegged my accent almost as soon as I’d opened my mouth.

Chris was exactly the kind of sweetheart who got my motor running. Huge brown eyes, cute nose, dimples, and the most honest and unabashed grin I’d seen in a while. He also kept aiming it at me. And winking. Probably because I hadn’t taken my eyes off him since he’d stepped into the studio. I’d eyefucked him nonstop and promptly demanded he take a selfie with me.

Not only had he taken the selfie, he’d let me crawl into his lap and cuddle against him while we did so. He’d smelled delicious. And the fact that he’d joked and teased me, complimented my long hair? I was infatuated. Plenty of guys hit on me. Few flirted so sweetly.

Good Jace was whispering at me to leave this poor hetero man alone.

Jace: Do you want a threeway with a cute boy?

Aiden: The photographer, makeup artist, and stylist are all on QFindr payroll.

Jace: You assuming I want to fuck one of your stupid employees. We’ve had this conversation a million times and it was YOU, sir, who got drunk on the Fourth of July and made out with Clive. Your lawyer.

I sent him the picture of me and Chris. He was grinning against my cheek and holding me against his chest. He was only a few inches taller than me, but his body was tight and compact and he had the cutest fucking dimples.

Aiden: He’s into it? Thought he was straight.

Jace: Honey. You know I don’t approach a playmate before I settle with you <3

Aiden: Good boy. But. Uhhh. Idk. I mean I’d love to fuck him, but I’m pretty sure he’s straight? Don’t wanna proposition one of the Rodriguez’s friends unless I know for sure they won’t be offended.

Jace: If he was straight, why the hell would he be at this damn photoshoot? That’s why their other friend, Angel, didn’t participate. He knew QFindr wanted it to be a queer campaign for a queer product full of queer models. No straight boys no matter how cute.

Jace: Basically. There’s no way Chris is straight. I reject the possibility!

Jace: Omg. Fine. But, if he’s open minded enough to be plastered all over the city on a queer advertisement, I have faith he won’t tantrum. So I’ll ask.

Aiden: sounds like a plan. I look forward to tearing that ass up.

Jace: I look forward to watching.

Aiden: oh shit before I forget, can you stop by Rite-Aid and bring me some contact solution?

Aiden: fuck that they make me look old

Jace: You are old.

Aiden: ill remember that tonight when you come in trying to get dicked down when im already dead asleep

Jace: NOOOOOOO I was kidding!

Aiden: love you too

The photographer gave me a slightly impatient look. It took everything in my power not to glare back in response. I’d learned a long time ago to respond to rudeness with uncharacteristic kindness or else people would trigger Evil Jace, who did not care that he was only 5’3” and barely a buck twenty soaking wet. Evil Jace would start a ruckus and make sure everyone got in on the fight.

But this photoshoot was for Aiden’s new company, so I smiled sickly sweet while wishing Mr. Photog would die.

My hostility only simmered down after I realized I was doing a set of photos with Charles Jovanovic and Chris. Charles was gorgeous in a vaudeville type of way, but we were so much alike that we’d both identified that it would be dangerous to spend a lot of time together.
Whereas I’d learned to channel my rage and control myself, Charles was a firecracker with a wild temper. It was way too easy to feed into that and start showing those characteristics myself.

The photographer instructed Chris to pose a couple of feet away while peering at the QFindr app on his phone while Charles and I stood with our own phones in hand, gazing at him and smirking. I made sure to position myself closest to Chris. Because why not?

“Okay,” the photographer said. “Pretend you guys met him on QFindr and now you’re all about to hookup for the first time.”

Chris cocked his head. “But there’s three of us.”

Charles clapped his hands and hooted so loud his voice could probably be heard down on Broadway. It was only then that understanding dawned on Chris’ face.

I leaned in, patting his shoulder, and said right in his ear, “No worries, boo. All-dude threesomes are my area of expertise. I know where everything fits, and I’ll be gentle.”
His eyes grew large, but other than a slight tensing of his shoulders . . . there were no other signs of discomfort. He didn’t jolt away, sneer, or narrow his eyes with hostility. All he did was scan my face as if checking my level of seriousness, arch an eyebrow, and then shrug.

“Does that mean I get two dudes buying me dinner first?” he asked. “Because that’s what’s up.”

Charles fell on the floor laughing, and I couldn’t help joining him.

Evil Jace was definitely going to get his way.

To read all of the shorts on the CITYWIDE tour, visit the blog tour page throughout the tour, or click on the “Extras” tab on the CITYWIDE page.
And to read the follow-up novella where Jace, Aiden, and Chris get their happily ever afters, order CITYWIDE now!
And to read more free stories about what happens after Chris meets Jace and Aiden, download THIRD RAIL now. 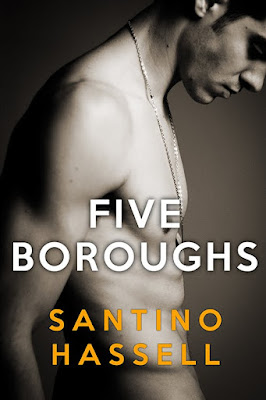 To learn more about the first three books in the Five Boroughs universe, please visit http://santinohassell.com/books/

To celebrate the release of Citywide, one lucky winner will receive a $10 Riptide gift card! Leave a comment with your contact info to enter the contest. Entries close at midnight, Eastern time, on November 18, 2017. Contest is NOT restricted to U.S. entries. Thanks for following the tour, and don’t forget to leave your contact info!