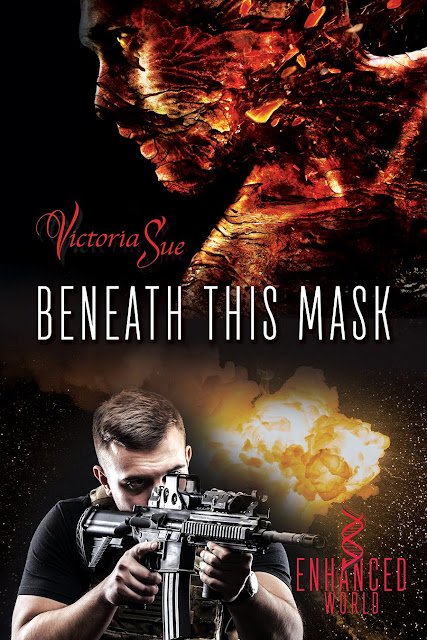 Blurb
Gael Peterson has spent years hiding behind the enhanced abilities he wears like a mask, even though he is an important, confident member of the FBI’s exclusive H.E.R.O. team. The hurt and betrayal of his mom’s abandonment and his father’s fists are secrets buried deep beneath the ugly scars on his face, and he doesn’t trust Jake, his new regular human partner, with any of them. In a world where those with special abilities like Gael’s are regarded as freaks and monsters, it won’t be easy for him to rely on Jake to have his back, especially when the abilities of a vulnerable, enhanced, nonspeaking child make that child a murder suspect.
Tempers rise and loyalties are challenged, and when the serial killer targeting the enhanced finally sets his sights on Gael, not only will Gael have to trust Jake with his secrets, he might have to trust him to save his life.

Exclusive Excerpt
Gael had been awake for a few minutes, but he didn’t dare move. He wasn’t sure how it had happened, but sometime in the last hour since he had woken Jake to check he was okay, they’d both fallen back to sleep and moved.

Gael was lying on his back, Jake on his front, but his left arm was slung across Gael’s abdomen as if to anchor him, and he was using Gael’s chest as a pillow. Gael swallowed. He didn’t know whether to move slowly or to move quickly.

Jake sighed and moved his head a little. Gael froze. So did Jake. He must be awake, then, and Gael figured he had nothing to lose.

“I am so very sorry,” Gael whispered. He’d meant to ask how Jake was feeling, but those words came out instead.

Jake’s shoulders lifted slightly as he inhaled and moved away from Gael. “I understand,” he mumbled as he sat up gingerly. He put a hand out to the nightstand and stood slowly.

“No.” Jake stumbled to the bathroom and closed the door.

Gael sat immobile. He heard the sound of the toilet flushing after a minute, and then the water from the tap. The bathroom door opened, and Gael winced. Jake’s face was awful. Black and purpling bruises tracked up the left side of his neck, jaw, and cheek. Any farther and it would have given him a black eye. Jake walked to the bed and drained the glass of water that sat there. Gael glanced at his phone. It was six.

Gael swung his legs out of bed. “How are you feeling?”

Jake put the glass down. “Headache’s manageable. Face is sore, but I’ve had worse,” he said quietly and sat on the bed, his back to Gael as if he didn’t want to look at him.

He picked up the jeans he had worn yesterday. “Give me ten minutes and I’ll be out of your hair,” Gael said. He watched as Jake’s shoulders dipped.

Gael stopped as he was just about to put a foot into his jeans and stared at Jake’s back. If you want. Was Jake really giving him a choice, or was Gael hearing things he wanted to, not what was actually being said?

“I didn’t mean to keep it from you,” Jake whispered, his voice cracking as if every word had sharp edges. “Gregory shocked the fuck out of me when he partnered us. But then….” Jake hesitated.

“Shit happened,” Gael said, putting his jeans back down on the floor. He walked around the bed and stopped. He so wanted to sit. Jake seemed to gulp a breath and dropped his head so it was resting in his hand, his eyes covered.

“Sawyer was right. We didn’t check, but that’s what SWAT is. We have to make split-second decisions. I wish it was different—had been different. I got transferred to ENu pretty easily and the opening was here, but I wouldn’t have cared where it was. My experience in SWAT was exactly what they were looking for, but I didn’t know what they were like. Then I met your team, and realized I wanted to be on it because that was where I could do the most good.”

Gael did sit then, taking comfort in the fact Jake didn’t tell him to fuck off, but he barely noticed either. He stopped talking and just sat with his face buried in both hands.

It was ridiculous in a way. They were both suffering. Both seeking forgiveness for a guilt that wasn’t their fault. Gael had hurt Jake when he had done his best to try to redeem himself, but really there wasn’t anything to forgive, and Gael? He should know better. He was better than this. If fighting to protect Wyatt had taught him anything, it was that his ugly was only skin-deep. He wasn’t the best person in the world, but he was no means the worst, and somewhere in the last few weeks, he’d forgotten that. Forgotten himself.

Gael swallowed and raised his hand, then let it hover for a few seconds while he dredged up a little more courage. He let his hand fall on Jake’s bare thigh, nearly snatched it back when Jake stilled, but he had to know. Was it guilt? Subconsciously? Or was Jake really attracted to him?

“I have somewhere to go. I’m not homeless and I’m not defenseless. Yeah, life’s shit sometimes, but I got carried away with my own pity party. There are a lot of people a ton worse off than me.”

Jake let his hands fall and covered one of Gael’s, raising his head and looking at Gael. “Room for another at that party of yours?”

Gael leaned forward and kissed the bruising. When he leaned back, he watched as Jake’s eyes got stormy. “How about we start again, partner?”

Jake grunted. “There’s no way Talon’s gonna swap us back. I think we’re stuck until Vance’s partner shows up.”

“Yeah—penance. You got Vance and I got Drew.”

Jake pointed to his jaw. “You deserve him.”

Gael grinned. “How about you get a shower and I’ll go make breakfast?”

Jake’s eyebrows lifted. “Or how about you help me shower, seeing as I’m injured?”

Gael smiled slowly and held out his hand. “You may have a point.”

Beneath This Mask is the third book in the Enhanced series. I highly recommend reading these books in order as more information about the characters are shared with each new story.  Yes, that means you really do need to read the previous two books before you read this one. You'll completely miss out on the little things and even some pretty major events that happen to the characters, otherwise.

So this book gives a lot of new information on our Enhanced team members, along with the new ex-ENu member, Jake. Unfortunately a lot of that information would be super spoilery, at least to me.. so you're totally going to have to read this one to get deep details on the plot. The only thing I'll say is that I loved both Gael and Jake by the end of this book and that to be prepared because they'll hit you in the feels a few good times.

On to my impression of this third book in the series... The author definitely knows what works for her characters in this series and she kind of pulls no punches at any time with them. Even while they're opening themselves up to new things, they still remain true to themselves, and true to their tight knit family group. Make no mistake these men ARE family in every sense of the word and that really adds to the story. I truly enjoy ensemble casts like this especially in paranormal books because that's what gives the story, or in this case, series, more depth and greater opportunities to continue world building and to develop new characters and plot lines. Yes, I love my authors that suffer from plot bunny excess syndrome. Especially in a series like this where you never quite want it to end...ever.

I will say that I wasn't disappointed at all in Gael and Jake's story. It showed a hell of a lot of backstory for both characters that added to the storyline. It also gave both of them a super sweet start to their HEA by the end of the book. And this book is going to take you on a bit of a roller coaster ride with Gael and Jake's journey because both men are wounded and need the other person more than they realize.  This is a completely different feel than Talon and Finn but Gael and Jake are a completely different couple that had their own unique storyline that fit them very well.  You'll see all the other men in the team in this story, along with a few new characters. This includes one new character that I kinda want their story NOW!!! I mean with an introduction like that.. who wouldn't want to know all about him?

Yes I'm being vague..but that just means you really need to read this book for yourself. Trust me, you'll totally enjoy it and want to read it again! Do remember to read this series in order because they really are meant to be read that way.

About The Author:
Victoria Sue fell in love with love stories as a child when she would hide away with her mom’s library books and dream of the dashing hero coming to rescue her from math homework. She never mastered math but managed to dream up quite a few heroes. Loves reading and writing about gorgeous boys loving each other the best—especially with a paranormal twist—but always with a happy ending. Is an English northern lass currently serving twenty to life in Florida—unfortunately, she spends more time chained to her computer than on a beach.

Loves to hear from her readers and can be found most days lurking on Facebook where she doesn’t need factor 1000 sun-cream to hide her freckles.