Won't Feel A Think by C.F. White - Blog Tour with Excerpt and Giveaway 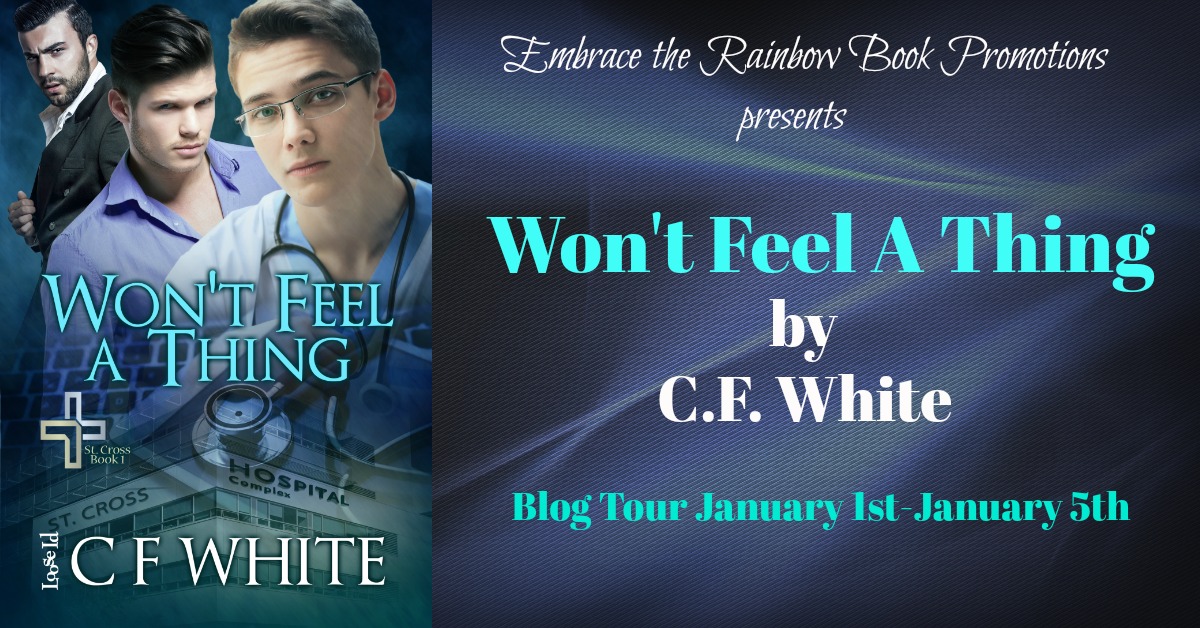 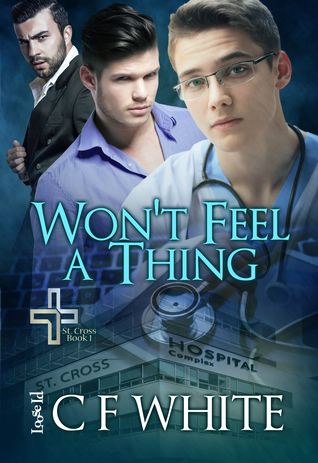 It takes more than a doctor to mend a broken heart.

Ollie Warne is fresh out of nursing school and working his dream job as a pediatric cardiology nurse at St Cross Children’s Hospital, London. He wants to start the new year free of personal heartache after his track record of falling for the wrong man--his New Year’s resolution is to live a life of carefree liaisons from now on.

He immediately meets Jacob, father of one of Ollie’s patients and a man harboring more guilt and past demons than even Ollie, which is saying something...

Their growing attraction makes it hard for Ollie to keep his distance, but he has to. Not only do the ethics of his profession demand it, but Ollie is entangled with another man--a predatory doctor who has a huge personal and professional stake in Ollie’s life.

Ollie risks more than his job by getting involved with a patient’s father--and much more than just the success of his New Year’s resolution, something that was supposed to ensure that, this time, he won’t feel a thing.

“You want my opinion?”

“Even if I never want to talk to you again.” Ollie took a sharp slurp through the straw of his smoothie and winced, his glasses tipping to the end of his nose. “Until tonight, anyway.”

Ollie sighed. He sucked up another mouthful of his daily fruit and veg intake, flicked back his blond hair that had lost its vigor after a twelve-hour night shift, and glanced away from Taya’s wide brown oval eyes. The eyes that signified she meant every damn word. Bitch.

Taya freed her dark, waist-length hair from its curled bun and stroked it over one shoulder. She wrapped the band around her slender, dark-skinned wrist, then sipped her dainty cup of pink hot chocolate. The blue edges of her lips, caused by the freezing weather, were subsiding back to their usual reddish tinge with each guzzle of the pink cream and rainbow of chocolate candies scattered over her ridiculous, sickly concoction.

She hadn’t even an offered a spoonful to him. Twelve hours straight on night shift clearly meant she needed the sugar all to herself.

“He’s not worth your time, your worry, or your respect.” She clanged the cup down onto the glass surface of the table, pulled her winter trench coat over the scrubs she hadn’t bothered to change out of, and reached for her packet of menthol slims.

“Neither are they.” Ollie pointed to the cigarettes.

Taya glared across the table. She unhooked the top of the packet, took one of the white sticks between her teeth, and lit it with her pink lighter. Blowing the smoke into the freezing cold air, she waved her hand.

“We all have our vices, Oliver.”

Ollie stuck his middle finger up. He slapped it back down and shoved it into his jacket pocket. It was freezing, and Taya had to bloody sit outside the corner coffee shop in order to smoke her way out of the trying night shift. She was right. Everyone needed their vices, especially with what he and Taya did for a living. He sighed.

“I think he needs patience.”

“He’s got plenty of those.” Taya pointed her two fingers clutching the death stick at Ollie.

“He’s a c all right.” Taya took another drag. At Ollie’s glare, she sighed and rested her elbow on the table top. “What? He is.”

“I think you may be the only female in the entire hospital who doesn’t like him.”

Ollie slurped the dregs of his raspberry-ripple smoothie and shivered. He should have gone for a hot drink, but it was hard enough to sleep during the day as it was. Caffeine would only make it infinitely more difficult.

“That’s because I know him,” Taya replied.

“Ew.” Taya grimaced around her cigarette. “No, thank you.”

Ollie leaned back in the chair. He waved a hand to waft away the smoke drifting into his face. To give her some credit, Taya was trying to blow it out of the side of her mouth to avoid him, but the icy-cold January breeze from the earlier sleet downpour blew it straight back. Ollie zipped up his puffer jacket, folded his arms, and jiggled on the cold metal chair.

“You nearly done?” He nodded to the half-full cup of violently pink chocolate. Taya blew another puff of smoke into the air, stubbed out the remains of her cigarette, and downed the rest of her drink, leaving a foam mustache on her top lip. She licked it away. “Yeah. Home to bed, miss the snowfall, back at eight. You?”

They scraped back their chairs, and Ollie tucked a five-pound note under the ashtray for the servers. Anyone willing to come outside and serve drinks in this weather should most definitely get tips, even if his measly nurse’s wages were probably far less than those of the coffee baristas working this part of London.

“I should go see my dad,” he replied.

Taya linked her arm in with his, curling her slender fingers around his quilted sleeve. Checking both ways along the crossroads lined by independent boutiques, high- class restaurants, unconventional cafes, and health-food shops, she steered him across, narrowly missing a black cab speeding over the miniroundabout. The glass-enclosed bus stop’s bench overflowed with waiting passengers, so he stood, waiting, jiggling on his freezing toes within his inappropriate-for-the-weather slip-on loafers, and checked the time on the electric board for when the next bus was due.

Taya tried to hold in the chuckle but failed miserably. Ollie didn’t mind so much. A good sense of humor was always best in these situations, not to mention their line of work. He pulled Taya in closer. It was fricking freezing, and snowflakes fell from the overcast sky. How would he get back to work later that night? London came to a standstill if even one flake hit any mode of public transport. Him living in the other end of the city—the cheap end—would make it all the more difficult to travel across town.

On occasions, where there wasn’t a downfall, he would have cycled in. But that was out of the question with the ice on the roads. And the fact he hadn’t woken up in his own bed last night. Ollie shuddered at the memory.

“Right.” Ollie bounced to keep warm while awaiting the number 252. “It’s January. So that means New Year’s resolutions. What’s yours?”

Taya stuck out her tongue.

“Which you broke last night.” Taya was a bitch like that.

“I don’t believe New Year’s resolutions should start until the second week of January.” Ollie rubbed his hands together, digging Taya’s arm into his side, and wondered why he hadn’t thought to bring gloves. Ah, yes, he hadn’t had any where he’d been before his shift started. He wasn’t allowed to leave any trace of his existence there.

“Riiight, ” Taya said. “So that means from today, you’ll be steering clear of arsehole men?” “Sadly, no. Unfortunately, I will no doubt encounter many of them in my time without realizing until it’s too late.”

Ollie wasn’t sure what the salute was about. But he wasn’t particularly religious, so maybe that was how it was done in church these days? Or temples, considering Taya’s family were Hindu. “So what is your resolution, then?”


GIVEAWAY: Win an ebook copy of Won’t Feel a Thing 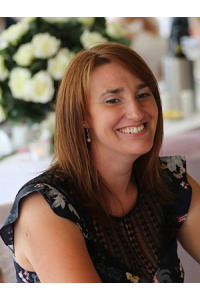 Brought up in the relatively small town in Hertfordshire, I managed to do what most other residents of the town try and fail. Leave.

Going off to study at a West London University, I realised there was a whole city out there just waiting to be discovered, so much like Dick Whittington before, I never made it back home and still endlessly searches for the streets paved with gold; slowly coming to the realisation that it is mostly paved with chewing gum. And the odd bit of graffiti. And those little circles of yellow spray paint where the council point out the pot holes to someone who is supposedly meant to fix them instead of stare at them endlessly whilst holding a polystyrene foam cup of watered down coffee.

Eventually I moved from West to East along that vast District Line, and settled for pie and mash, cockles and winkles, and a bit of Knees Up Mother Brown to live in the East End of London; securing a job, creating a life, a home, a family.

Having worked in Higher Education for the most proportion of my adult life, a life-altering experience brought pen back to paper, having written stories as a child but never having the confidence to show them to the world. Now embarking on this writing malarkey, I cannot stop. So strap in, it’s a bumpy ride from here on in.