Life After Humanity by Gillian St. Kevern - Release Blitz with Excerpt and Giveaway

Ben is a recovering vampire determined to pick up the pieces of the life that came to a halt when he was murdered over a year ago—even if that means distancing himself from his few remaining friends. Nate, struggling to navigate his new identity as a Class 3 Unknown paranormal, knows it will take more than mastery of his affinity with plants to convince Ben they belong together.

When Ben’s application for human status is denied, he must fight to leave the paranormal world behind him while Nate’s generous impulses drag him into conflict with a werewolf pack with designs on ruling New Camden. As Ben’s vampire family draws closer to finding him, his vampire instinct awakens—throwing his continued existence into jeopardy. The hunt for the missing werewolf continues, and Nate and Ben become pawns in Councilor Wisner’s plans to take control of the city. Their only hope is each other—if they can see that before all is lost.

Chapter One
Someone had broken in.

Ben stood in the doorway of his New Camden apartment. The door swung open at his touch, even before he’d fished his key out of his pocket. Beneath his feet, the protective wards laid around the apartment throbbed like an open wound. Someone had forced their way past Ben’s carefully laid defenses—someone who was still there.

Damnit. Ben set his briefcase down noiselessly beside the door. Just one day. One day without anything supernatural happening. Is that too much to ask?

He didn’t move, using his senses to probe the darkness beyond the door. Vampire—or werewolf? He hadn’t felt any interference with his wards until he’d reached his apartment. That ruled out a magical practitioner or any lesser supernatural being that would have needed to unpick the spell piece by piece. Please, not another demon. None of the boxes dotted around the living room were big enough to hide an intruder. Unless they crouched behind the sofa or pressed against the wall in the shadows, they weren’t in the living room.

Keeping his attention focused on the apartment, Ben fished for his umbrella stand and the cane leaning against its back. It looked benign, as if it had been forgotten by an elderly visitor, but when Ben twisted the handle, he released the long blade hidden within.

Not Ben’s first choice of weapon—the blade was too long and too dainty—but it was a weapon, able to stand up to vampire or demon. If this is a werewolf, I am in serious trouble. The stale air of his apartment lacked the distinctive ripe odor of werewolf. Still, Ben couldn’t rule it out.

Why would a werewolf break into my apartment? True, Ben had a past as a supernatural investigator for ARX and had killed a few werewolves in his time—but that was the past. There was nothing linking his life now to ARX—was there?

Ben slipped noiselessly into the dimly lit living room, heading for the sofa. Nothing there—or in the shadows. He scanned the room, but everything looked as it had that afternoon when he’d stepped out to meet his accountant. All I did was my taxes! Where’s the harm in that?

But bringing his financial records up-to-date for the year he’d been dead had taken all of the afternoon. Ample time for whoever it was to find a hiding place. Ben stood motionless in the living room, straining with his senses for any clue to the intruder.

The open doors of his apartment were in deeper shadow than the rest of the living room. Reaching for the light switch was tempting, but Ben’s eyes were now accustomed to the dark. Readjusting would cost seconds he wasn’t sure he had. His eyes fell on the stacks of paper on his living room table.

At first glance they seemed undisturbed, but a closer look revealed a few papers had drifted to the side. Disturbed by a breeze? Ben turned to the kitchen door. A sliver of light was just visible through the crack beneath.

A trap. There was nothing of interest to any supernatural being in the kitchen, so it would be the last place he searched. His guard down, his senses dull, he’d be unprepared for whatever waited beyond. Or—Ben frowned as he approached the door—was there another explanation?

A faint sizzling sound emanated from beyond the door, followed by the heavy smell of garlic.

Ben’s nose twitched. A werewolf would not cook an enemy dinner. A demon wouldn’t know how. A vampire might—but a vampire would not use garlic.

I’ve got a bad feeling about this. Taking a deep breath, Ben slowly levered the handle down and let the door drift open. His fear was confirmed.

Nate stood at the counter, his back to the door. The strength implicit in his broad shoulders and muscular arms was softened—but not disguised—by the domesticity of his actions. As Ben watched, Nate lay down the knife and used the chopping board to slide his neatly diced peppers into the frying pan. At his elbow a pot boiled merrily.

Far more dangerous than any werewolf. Ben swallowed, finding it hard to speak. He felt as if he were caught in a spell, unable to do anything but watch.

Absorbed in his task, Nate seemed unaware of Ben’s presence. He was dressed down, wearing a faded T-shirt that hugged his torso. The edges of his jeans were frayed, hanging down over his bare feet. His hair hadn’t been styled, and it curled up at the base of his neck. Finished adding the mushrooms to the pan, he stirred its contents and then stretched out a hand to the basil growing in a pot on the windowsill. The window reflected his smile, inward and alarmingly personal.

Ben swallowed. Nate had broken in—so why did he feel like the intruder?

Dangerous. Ben dug his fingers into his arm. Focus! Casual worked annoyingly well for Nate, made more effective by the knowledge that Nate made a point of looking good. There were few people who got to see Nate dressed down. But Ben couldn’t think about that, or how right Nate looked in his kitchen. He had to get Nate out of his apartment before it was too late.

“What happened to seeing less of each other?”

Nate started, snatching his hand back from the basil. He turned, and Ben’s initial flash of triumph gave way to alarm. Nate’s eyes were a great weapon. Hazel and framed by dark, almost decadently soft lashes, they radiated whatever Nate felt with an immediacy that was hard to resist.

Ben looked down at the blade in his hand. It wouldn’t help him now. “It’s a family heirloom. Used to be my grandfather’s.” He turned back toward the front door.

“And you just keep it there by the door?” Nate followed Ben to the kitchen door to watch.

“In case of intruders.” Ben sheathed the sword and dropped the cane back in the stand. He shut the door. His heart raced. Ben took a moment to summon all his anger. I was this close to a day without anything supernatural happening! “You’d better have a good reason for breaking into my apartment.”

“I do.” Nate stood in the kitchen doorway, one hand resting against the frame.

“I had a bad feeling this afternoon. A premonition.”

Not this again! “It wasn’t a premonition.”

“It felt really real. I was just watching TV and all of a sudden, these words popped into my mind. You were gone and I wasn’t going to see you again. It really freaked me out.”

“Enough to add breaking and entering to your criminal file?”

Nate radiated hurt. He wrapped his arms around himself. “I had to see you. No one answered the door, so I tried calling. When it had been a couple of hours and you hadn’t answered your phone, I—well, I got worried.”

“And that’s when you broke in?” Ben pulled his phone out of his pocket, tapping in his pin.

“That was an accident. I had my hand on the door, and I was thinking about how much I wanted to be on the other side, and the door just…relaxed.”

“I tried the handle and it opened.” Nate’s eyes settled anxiously on Ben’s. “Did I break anything?”

Ben looked down at the welcome mat beneath his feet. He didn’t need to lift it to know what he would find. His runes, intact but faintly smudged. “Only the natural laws regarding the magical properties of runes.”

Nate scratched the back of his neck. He dropped his gaze, shuffling his feet, but was unable to keep from looking up to check Ben’s expression. “Are you mad?”

Embarrassment looked wrong on Nate. Ben was reminded of a dog caught doing something he knew he shouldn’t be—and felt the tight knot of anger in his stomach undo. Curse him! If Ben was going to get out of this encounter unscathed he needed his anger. “Of course I’m mad. My apartment is my place. Coming home to find someone’s forced their way in is…not good.” Not good? That wasn’t going to convince anyone—least of all anyone with Nate’s perceptive nature.

It was hard to read Nate’s expression. “I made dinner. As an apology.”

At least he realized he needed to apologize— No! I have to be firm. “I think your apology is burning.”

“Shit!” Nate ducked back through the doorway to attend to the frying pan.

Ben took the opportunity to escape. 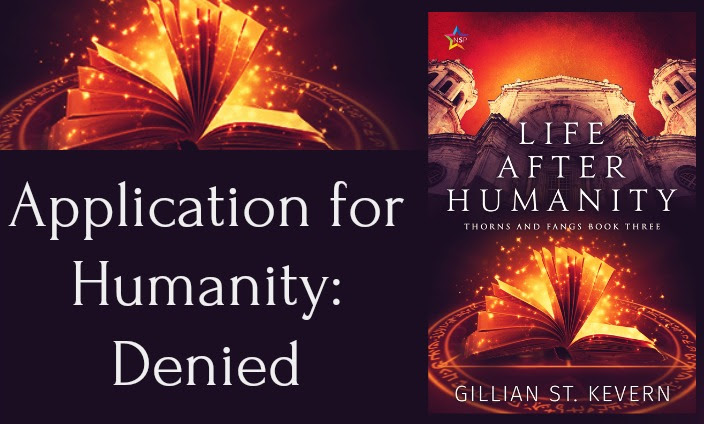 Gillian St. Kevern is spending Christmas in her native New Zealand, where the seasonal festivities include pavlovas, walks on the beach, and a distinct lack of sweaters, seasonal or otherwise. She will almost certainly get sunburnt at some stage.

Gillian reads and writes a variety of genres. She’s a huge fan of paranormal with an emphasis on vampires. The third and fourth books in her vampire series, Thorns and Fangs, are due for release in January and February 2018. She also explores Welsh Mythology in the on-going Deep Magic series. In 2018, she plans to explore another beloved genre―vintage mysteries. She loves discovering new books and authors, so please get in touch if you have any good book recommendations to share!