“Project: Notice Me” is a win-win for Kyle. He’ll do a series of demonstrations at the club and have a good time with people he knows and the fledgling Doms who are new to the scene and looking for encouragement from an experienced Sub. And maybe along the way, he’ll attract the attention of the new Dom at the club, the one with terrible taste in fashion, but who has the most intense focus Kyle has ever seen. He wants the entirety of the man’s attention on him. The clothes are optional.


To Seek and to Find
Tamryn Eradani © 2018
All Rights Reserved

“So,” Kyle says. He slinks into Jenny’s office, glad he wore his stretchy jeans when he pulls a chair out from the table and turns it around so he can straddle it. Even with the give in his jeans, they still pull tight across his quads.

Jenny doesn’t glance up from her computer.

“Remember that time I introduced you and Charlotte?” Kyle asks, undeterred by her obvious disinterest in him. He and Jenny have been best friends for what seems like forever, and they both work from their apartments—Jenny does photography, Kyle does graphic design—and if she didn’t want to be bothered, then she would’ve closed her office door.

As it is, she’d left it wide open, and Kyle is happy to take advantage.

At the mention of Charlotte’s name, Jenny looks up, a smile on her face. They’ve been together for five years, but her expression always softens whenever Charlotte’s mentioned as though they’ve only been dating for a few weeks. Kyle thinks it’s sickeningly cute. He hopes one day someone will look like that when his name is brought up.

Jenny registers the rest of what Kyle’s said and her smile is replaced with something more guarded, suspicious. “Last time you opened with that, we almost wound up in jail.”

“The time before that you made me go bungee jumping with you.”

“That was awesome.” There’s nothing like the rush of adrenaline as he plummeted toward the earth. Then, right when he thought his harness was going to fail and he would splat, it caught him with a jerk of reassurance. Kyle had loved it. Jenny…not so much.

“Which meant you were incredibly brave on top of being a good friend.” Kyle needs to get to the point. He’s on a break from his work because all shades of red now look the same to him, but he has a project to finish before the day is over. “This is a favor that’ll benefit us both.”

Kyle and Jenny have been roommates, have worked together, and have scened together throughout their long and storied friendship. They’ve never slept together, because Kyle’s bisexual, and while Jenny enjoys men on an aesthetic basis, she prefers sex with women.

They frequent the same club, Enchanting Encounters. Jenny does rope demos and occasionally ties up a close friend, but she isn’t as involved with the casual scene as Kyle. She’s been pulling away since she met Charlotte, going mostly to keep Kyle company or catch up with their friends there.

Kyle, on the other hand, is still searching for someone who wants him for more than a couple of sessions a month. He wants a Dom who wants him back and so far, he hasn’t had any luck. He’s hoping his luck is about to change.

Jenny abandons even the pretense of working. “Is this about the new guy?”

Kyle spends a lot of time at Enchanting Encounters. Working from home means he’s able to set his own schedule, which allows him to sleep in after a night of play or take an early afternoon if that’s what works better with his partner’s schedule.

Sometimes, he’ll go to the club to have a drink or chat with his friends, but more often he’s there with the intent to pick-up or because he’s part of a demo.

Last week, things got interesting, because there was a new guy.

Unfortunately, it also means there’s a lot of competition for the man’s attention, and Kyle needs a battle plan.

The first time Kyle saw New Guy it was a normal Friday night and he had a drink in hand as he did a sweep of the bar to see if anyone caught his eye. He hadn’t come in with a particular scene in mind. Some nights, that made it easier to find a partner while other nights it made it more difficult.

The only person who drew his interest was TJ, Kyle’s favorite bartender, and while TJ flirts with anyone who seems receptive, he doesn’t have sex with club members. It’s a shame, but Kyle can respect his choice.

Kyle was considering a second drink when his eyes landed on someone at the far end of the bar. New Guy was, well, new, which immediately made him interesting. What kept his attention was the expression on the guy’s face as he talked with Lou.

The guy was completely captivated even though Kyle knows from personal experience that Lou isn’t the most interesting person to talk to. Lou’s gorgeous, especially when he has red welts against his almost inhumanly pale skin, but he’s not the most thrilling conversationalist.

Still, New Guy leaned in like nothing in the world could pull him away.

Part of the reason Kyle scenes is he loves having the full attention of another person on him. If New Guy can be that intense during a conversation, then Kyle wants to find out what he’s like in a scene.

He didn’t look away from Lou once, didn’t give Kyle a chance to catch his eye, and Kyle eventually had to move on. He didn’t go home with anyone Friday night. A couple of people approached him, but he turned them down. New Guy was the only person on his mind, and it wouldn’t be fair to anyone he scened with.

Anyway, Kyle didn’t have a chance to talk to New Guy on Friday night, but he’s determined to change that. The guy is attractive and he has the kind of focus Kyle craves.

“You’re not the only one asking about him,” Jenny says.

Kyle shrugs. “He’ll want me once he sees me.”

“Modest. So, what’s your big plan, do a bunch of demos until he wanders over to see one?”

Jenny groans. “Are you serious?”

“It’s a good plan! I’m hot, I’m an incredible sub. And while I’m waiting for him to notice me, I’ll be doing scenes I like. Plus, Wanda’s been after me to do some more demos. I’m good for business.” Kyle doesn’t bother holding back his smirk.

Jenny reaches across her table to shove his face away. “You’re terrible.”

“But you’re going to help me.”

Jenny sighs. “Because you got me and Charlotte together? That won’t work as leverage forever.”

“You’re going to help me because you just got a new order of rope in, and you know I look gorgeous in lavender.”

“Ugh. Fine. I’ll do a demo with you. But you’ll let me tie you up for a photoshoot. Unpaid.”

Kyle doesn’t bother to hold back his grin as he says, “Deal.”

It’s an idle threat. She likes to suspend him, but usually not upside down.

“You’re the best,” Kyle tells her. He stands up, smacks a kiss to her cheek, and leaves to finish the rest of his project. He needs to be on top of his work this week or he won’t have the time to hang around the club and put Project: Notice Me into effect. 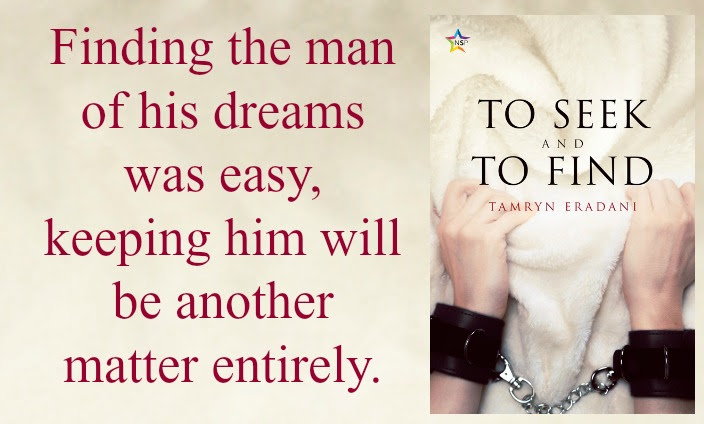 Tamryn studied English and Creative Writing in school but has been writing since she could first hold a pencil. Recently, she’s turned her focus towards writing erotica. She enjoys writing stories where sex comes first, then feelings, because doing things out of order can be fun. Tamryn has spent the past few months writing the Daniel and Ryan series with a lovely view of mountains out her window, and she’s now searching for a new mountain range to serve as her backdrop as she begins her next project.