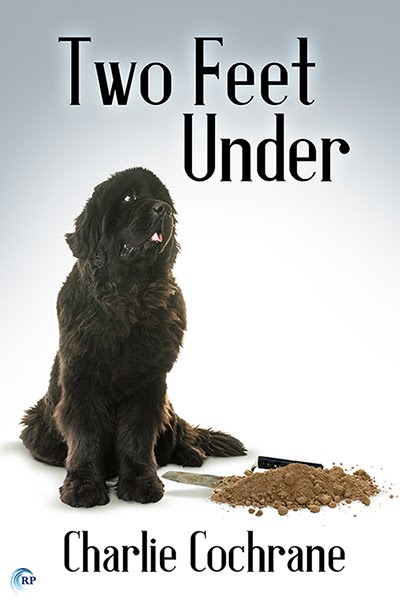 Two Feet Under began life as a conversation in a car, when my eldest daughter and I got stuck in a traffic jam on the way to an author/reader event. It gained a criminal mastermind as a result of another conversation in the car with her younger sister. It got its background thanks to the popular television series “Time Team” and a setting care of the northern part of Hampshire. The plot came from the author’s twisted imagination, via a lot of checking. And at least one character is based on people I know. You have been warned.

About Two Feet Under

Things are looking up for Adam Matthews and Robin Bright—their relationship is blossoming, and they’ve both been promoted. But Robin’s a policeman, and that means murder is never far from the scene.
When a body turns up in a shallow grave at a Roman villa dig site—a body that repeatedly defies identification—Robin finds himself caught up in a world of petty rivalries and deadly threats. The case seems to want to drag Adam in, as well, and their home life takes a turn for the worse when an ex-colleague gets thrown out of his house and ends up outstaying his welcome at theirs.

While Robin has to prove his case against a manipulative and fiendishly clever killer, Adam is trying to find out which police officer is leaking information to the media. And both of them have to work out how to get their home to themselves again, which might need a higher intelligence than either a chief inspector or a deputy headteacher. Adam Matthews's life changed when Inspector Robin Bright walked into his classroom to investigate a murder.

Now it seems like all the television series are right: the leafy villages of England do indeed conceal a hotbed of crime, murder, and intrigue. Lindenshaw is proving the point.

Detective work might be Robin's job, but Adam somehow keeps getting involved—even though being a teacher is hardly the best training for solving crimes. Then again, Campbell, Adam's irrepressible Newfoundland dog, seems to have a nose for figuring things out, so how hard can it be?

Check out the Lindenshaw Mysteries!

Do readers see what writers see?

I have an historical detective series, the Cambridge Fellows mysteries, which features two leading men who work as a detecting team. I have had four different people (all of whom are very well placed to know) tell me that one of the pair is on the autism spectrum. Based with that overwhelming body of opinion, I have to conclude that he is, although I didn’t deliberately write him like that. Clearly my subconscious was working overtime.

This is not a unique experience. I’ve had readers point out that a certain character of mine has a blazing temper and I’ve been on the point of arguing when I’ve decided to go for a re-read. What do I find? Blow me down, they’re quite right. I didn’t mean for ‘x’ to be quite so ready to fly off the handle, nor had I made him so, but there he is, in all his short-tempered glory. As though he was driving the depiction, not me.

I’ve had the same experience with my reader’s hat on. Did you know that AA Milne (the Winnie the Pooh man) wrote a murder book, “The Red House Mystery”, featuring two male leads, Tony and Bill? When I read it, the “slash” leapt off the page. Milne himself objected to love stories getting in the way of the detection, so he takes Bill’s female love interest “offscreen” pretty rapidly, then – ironically – proceeds to give us an almost love story between his two leading men. If you picked up this book without knowing the author or context, you might think you were reading a romantic mystery, with a gay bloke (Tony) who pursues, and then is all over, another man.

I’m not imagining this plotline, I’m certain. I can see so much evidence for it. For example, there's the hand holding; Tony tells Bill he's the most perfect "Watson" before taking Bill's hand in both of his to say, "There is nothing that you and I could not accomplish together..." (That's the sort of thing he says a lot.) Bill responds by calling him a silly old ass, and Tony replies with "That's what you always say when I'm being serious" which is very similar to a tense, flirtatious interchange between Laurie and Andrew in Mary Renault’s "The Charioteer".

Am I seeing something Milne never intended to portray? Just as readers are seeing in my characters something I didn’t intend? And does that make the reader right and the author wrong or vice versa? Is it just each of us finding our own interpretation? Perhaps there’s something really subtle going on. I have little doubt that Milne had no intention of giving us that romantic storyline, but he did so, nonetheless. Maybe he was just being observational in his writing, basing Tony on somebody he had known, weaving in elements of conversations he had heard or behaviour he had seen, as so many of us do. So are these simply examples of elements bypassing the author’s conscious brain and going straight from inspiration to page?

As Charlie Cochrane couldn't be trusted to do any of her jobs of choice—like managing a rugby team—she writes, with titles published by Carina, Samhain, Bold Strokes, MLR and Cheyenne.

Charlie's Cambridge Fellows Series of Edwardian romantic mysteries was instrumental in her being named Author of the Year 2009 by the review site Speak Its Name. She’s a member of the Romantic Novelists’ Association, Mystery People, International Thriller Writers Inc and is on the organising team for UK Meet for readers/writers of GLBT fiction. She regularly appears with The Deadly Dames.

To celebrate the release of Two Feet Under, one lucky winner will receive a swag bag, including magnet, napkins, bookmark, pencils, hanging decoration, postcards, and a coaster! Leave a comment with your contact info to enter the contest. Entries close at midnight, Eastern time, on January 13, 2018. Contest is NOT restricted to U.S. entries. Thanks for following the tour, and don’t forget to leave your contact info!