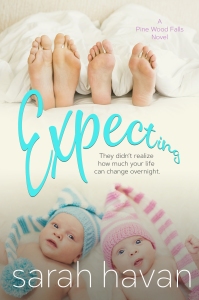 It’s the start of a series but can be read as a standalone.

Conrad Mayfair is finally becoming comfortable in his own skin, so he wants to tell his best friend Mason that he’s gay and in love with him. He can’t seem to get the words out, though. But soon the flirting starts, followed by a weekend of marathon sex, and the shocking news a few months later that Conrad is going to be a father.

Something’s going on with nineteen-year-old Mason Donnelly. He seems to be developing breasts, has felt sick for months, and is constantly tired. After a doctor’s appointment to try to figure things out, his life flips upside down. He learns not only is he intersex, but he’s also pregnant, a condition only made possible because Mason is an omega and Conrad is his alpha.

Conrad and Mason are introduced to a new way of life they knew nothing about. While Conrad is willing to jump in and accept it, Mason isn’t so sure. Together, they have to decide if it’s a life they truly want.

“Do I see stubble?” my best friend Conrad asked. He lay on his bed with his hands behind his head, shirtless, his abs on display for all of their six-pack glory. Images of me running my tongue over them flashed through my head.

I rubbed the side of my jaw. “You sure do. At the age of nineteen, I’m finally becoming a real man.”

“Dude, you’ve been a man. Just a hairless one. Are you still hairless everywhere else?” He smiled and sat up, crossing his legs.

“God, Conrad.” I turned around in my desk chair and folded my arms over my chest, pretending I didn’t want to share the information. He knew I’d cave and tell him, happened that way every time.

“If you must know, no.” I glanced over my shoulder at him.

“Chest hair?” he grinned and leaned forward, resting his forearms on his thighs and clasping his hands.

I spun around to face him and shook my head.

“Okay, we need to stop talking about this and that hair has been there for a couple years now.”

“You’re my best friend. We should be able to talk about everything.”

“Some things, I don’t want to talk about.” I turned back toward my desk, trying to complete my assignment for the class I had later in the day. I loved taking a fiction writing course, but I didn’t like when we had to write papers analyzing books we had read in class, thus me still working on my paper.

“It’s not like you’re the only one who’s had delayed puberty.” Those words, how I loathed them.

“I swear to God I’m going to punch you,” I said over my shoulder.

“All right, sorry. I know it’s a touchy subject for you.”

“And yet, you decided to have a conversation about it.”

I sighed and turned back toward Conrad. “But now, I feel ready to, you know.”

“Have sex?” he asked, raising an eyebrow at me.

“Because you grew some facial hair?” Conrad rubbed his palm over his jaw which caused my cock to stir in my pants. I had fallen in love with him years ago, and my feelings for him lately had gotten a lot stronger.

“Maybe it’ll make me look older, more rugged, more desirable.” Because I was a sophomore in college and still looked like I belonged in high school.

“If you’re going to be with someone, they should want to be with you no matter what you look like.”

“That’s easy for you to say. You’re six-foot-four and have been all manly since you were like thirteen. I’m five-foot-five, incapable of building my pecs. Instead I have perky nubbins. Like what the heck is that about? And my Adam’s apple isn’t even all that visible. All of that doesn’t scream sex appeal,” I said, looking over at Conrad who screamed of sex appeal. Besides his gorgeous body, he had the perfect shade of medium brown hair that he kept short with his bangs a bit longer which he always styled up. Hair I had wanted to run my fingers through so many times before. And his smile, a bit mischievous but always so genuinely happy.

Sarah Havan grew up in the Midwest and still actually lives there. She has an appreciation for having all four seasons. She writes all kinds of romance, but most recently has focused on gay romance in her writing.