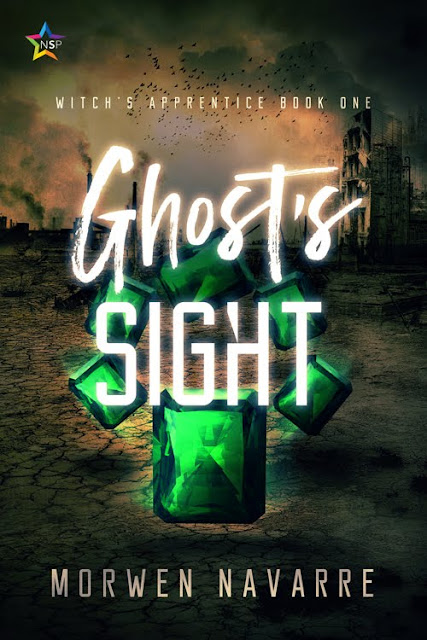 Years ago, a bond was forged when a little boy, plagued by dreams and visions he could not explain, became the Witch’s new apprentice healer.

Gerry, a rugged and headstrong hunter, is brought to the Witch for healing, and Ghost is forced to reveal the mark beneath his snowy hair that sets him apart from other men.

But Gerry does not reject Ghost as an outcast. He finds Ghost beguiling and mysterious and declares his intent to claim Ghost as his own. When Ghost is kidnapped by a rogue ranger, Gerry will need to hunt a lethal and unpredictable prey, and Ghost will need to use all his skill to survive until Gerry can find him.

Chapter One
“Fuck, Conn, pay attention,” Gerry growled, low and irritated. He ran a hand through his hair, narrowing his eyes as he glared at his younger companion. “We’re not hunting runners today. Mother’s got us after sind, and you’re spotter, so spot, you little shit.”

“Don’t fucking tell me what to do,” Conn retorted, his shaggy brown hair flopping into one dark-blue eye. “You’re a dependent, same as me, so don’t pull the fucking alpha shit. Only Mother tells me what to do and he’s not here. And I am spotting, you stupid fucker.” There was berry juice on his lips, and his fingers were stained with it, belying his words.

The hunter frowned, watching the lithe young man turn away, poking the ground at random and with little enthusiasm. Gerry fought the urge to reach out to cuff Conn, to see the pout leave the little shit’s face. Still, if he was going to be an alpha one day himself, he needed to master his temper. The world was evidence enough of what could happen when those who led lost sight of what mattered most.

When everything had gone to shit, well back before anyone living could remember, there was nothing left of most families. The cities were burning or ravaged by looters. Anyone with any sense had fled for the open places. At first, it was tents or rough camps where strangers gathered and tried to make sense of what had happened. Those were hungry days marked by illnesses thought eradicated.

The godsmen called it a just punishment and burned the books that might have held answers. What had been a minor cult was now the only faith, and the godsmen took every opportunity to shape the new world emerging from the ruins. They made sure no one would make the mistakes of the past by eradicating all traces of it, other than the knowledge preserved by the witches who ignored the godsmen and their edicts.

The witches used bits and pieces of ancient relics, scavenging them from the ruins of the cities themselves or trading with the rangers who haunted the ruins and lived outside the godsmen’s laws. The witches could not heal everything, but fewer people died when a village had a witch, despite what the godsmen said. The godsmen compromised by declaring witches followed the Seeker and the witches pretended to agree.

Those few who survived the aftermath were determined to prevail. They built houses, rough at first, but increasingly sturdy as their skills were honed by failure. Random strangers began to form themselves into families. The people most comfortable leading became known as alphas. Alphas took on dependents, mostly children who were on their own or the elderly left with no one to care for them. They learned what could be eaten by tasting every root and found familiar fruits hanging from trees or growing on bushes and vines. The factories that produced most other foods were as lost as the cities, so they had to teach themselves to hunt and fish. Runners, graceful and long-legged herd beasts, were not afraid of men back then and their meat was curiously satisfying.

The motley collections of houses turned into villages, and once the rivers had settled into their new courses, there were fish and there was trade. People adapted. Crops were sowed, and hunger ceased to be the most pressing concern. That left room for the godsmen to speak up and remind the people they were all under the eyes of the Eight. Life went on.

Morwen has been writing since she could first hold a pencil, and by all accounts she didn’t limit myself to paper. Walls, tablecloths and the occasional sibling were all fair game, and it shouldn’t be surprising to learn that markers were banned in her home with all due haste. Although she now contents herself with inconveniencing electrons, the desire to bring the stories in her mind to life hasn’t waned. In her spare time, she reads, putters in the kitchen, and relaxes on her terrace or at the lake, weather permitting, with her corgi who strives to be part muse, part food disposal. She’s also addicted to coffee and has a close relationship with her Keurig.