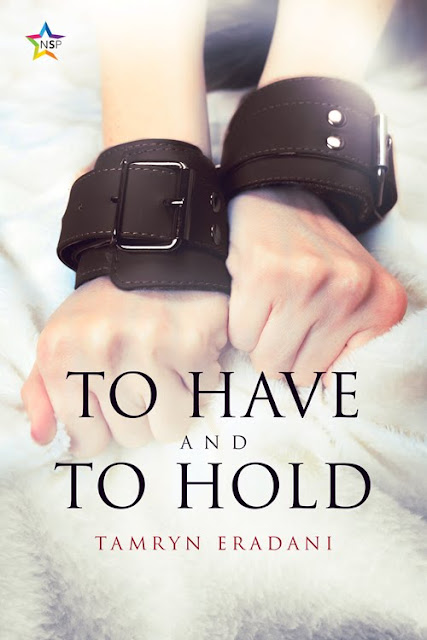 Following the success of Project: Notice Me, Kyle and Aidan are now in a three-month extension of their play. If three months wasn’t so short, then it would be everything Kyle wants.

They’ve been together long enough to meet each other’s friends and to try new things. Kyle only hopes that at the end of the three months, he isn’t the only one who wants more.

To Have and to Hold
Tamryn Eradani © 2018
All Rights Reserved

“I can drive myself tonight,” Kyle says as he rummages through his closet for the third time in the past five minutes. Jenny’s been here for fifteen, amused as he worked himself into a panic, but now her arms are crossed over her chest, and she’s moving into impatient territory as he can’t settle on what he wants to wear. “You and Charlotte should head out.”

Tonight, Kyle’s two best friends, Jenny and Charlotte, are meeting his Dom for the first time.
Kyle’s been crushing on Aidan since the first time he saw him at Enchanting Encounters, the kink club he’s been frequenting for years now. After he managed to catch Aidan’s attention, they had a two-week trial period to see if they were compatible beyond physical attraction.

Now that they’ve extended their play to a three-month commitment, Kyle figures it’s time Aidan met the most important people in his life.

Well, that, and Jenny was determined to meet Aidan, whether Kyle was there or not, and he doesn’t need Jenny scaring him off.

“We’re not leaving you behind,” Jenny says. She sprawls across Kyle’s bed, making herself comfortable.

“Absolutely not,” Charlotte agrees, wandering in. She lies down next to Jenny, resting her head on Jenny’s stomach. “I’m not sure you’d ever make it.”

“Besides, if you drive in with me and Charlotte and we have to leave early, then you’ll have no choice but to catch a ride home with your man.”

“Huh,” Kyle says. It’s a good point. It’s a Wednesday night which means Aidan has afternoon classes tomorrow. Maybe he could go home with Aidan. Or have Aidan come home with him. As long as there’s bed sharing involved, Kyle isn’t picky on whose bed they sleep in.

“Never say I don’t do anything for you,” Jenny tells him. Then, “Put down that shirt. It’s basically see-through.”

“It looks good on me,” Kyle points out, but he puts the shirt back because it’s not appropriate for where they’re going. He picks up one of his polos and glances at his small collection of dress shirts. “Is this a date?”

“Would it be bad if it was?” Charlotte asks.

“Put a damn shirt on so we can go,” Jenny says.

Kyle grabs a long-sleeve thermal to throw on. Shirt and jeans on, he only has one thing left to do. “Overnight bag.”

“I take it back,” Jenny says. “You can drive yourself, and every minute you’re late is a minute I have to ask Aidan questions.”

“Nope, you said you were giving me a ride. No takebacks.”

Packing an overnight bag is quicker than dressing himself for this maybe-date. Socks, boxers, pajamas, a black V-neck, his favorite briefs, and a toothbrush. He already has condoms and lube stashed in his bag, and he can’t think of anything else he might need.

“On second thought.” Kyle runs a hand through his hair. “Maybe…”

“No,” Jenny says. She jumps out of bed so she can slam Kyle’s bathroom door shut, cutting him off from his comb and his hair gel, and Kyle dissolves into laughter.

“All right,” Charlotte says, but she smiles at both of them. “Let’s go. We don’t want to be late. I want to make a good impression on Aidan.”

Charlotte pats his cheek. “Then there’s nothing for you to worry about.”

Except I want him to love me too.

Kyle links his arm through Charlotte’s. “Come on, I’m in the mood for a beer and pretzels dipped in cheese sauce.”

“Gross,” Jenny says and leads them out the door.