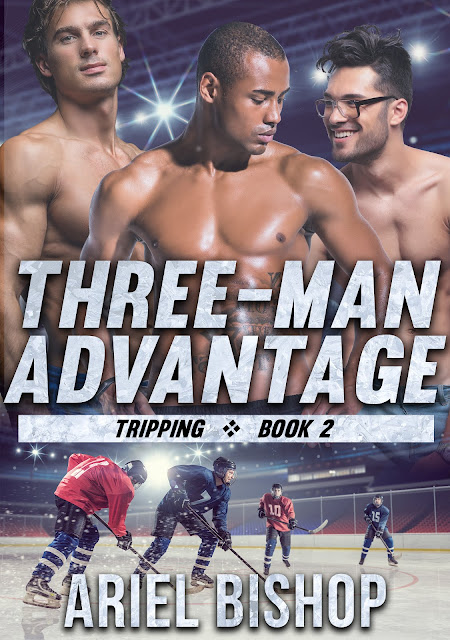 Leadership and setting an upstanding example are everything to Wisconsin Wendigos captain David Dickson. On ice, he’s got it all together. Off ice? Not so much. For years he’s been pining for not one, but both of the loyal alternate captains who’ve stood by him through thick and thin.

They’ve always had his back…

Sasha Ivanov and Bo McAllister have always seemed more into each other then into their captain. But when the stress of the season starts affecting David, they’re more than willing to step up and help him deal with it--by whatever means necessary.

When Sasha and Bo offer him everything he’s been wanting, David can’t say no, even though he knows it comes with an expiration date. But the more he finds himself fitting into their life, the more he wants what he knows he can’t have.

Can Sasha and Bo find room in their hearts for one more person? Will David let them bring him into their life? Or are these captains doomed to remain just teammates?

Find out in this steamy sports romance novel, featuring a team captain who’s too stubborn for his own good, a defenceman with a heart of gold, and a goalie who never has a problem using his words.

Halfway through his salmon and broccoli at dinner, Bo drops his fork with a clatter. When Sasha doesn’t look up from his own plate, he follows it up with an ostentatious throat clearing.

“Bone stuck in throat?” Sasha asks, cutting off a piece of his chicken breast.

That gets him a look, Sasha’s eyes narrowed as he chews and swallows. “Okay,” he finally says, his voice far more resigned than it should be for someone who claims to love Bo.

“Okay, hear me out. David needs somebody, but who has time to fucking date at this point in the season?”

Sasha shrugs. “Could fuck teammate. Is what I do.”

“I’m ignoring that, because we both know you love me,” Bo says cheerfully. “Getting back to my point, you know David’s not going to start hitting on some random guy from the team. He takes that captain shit seriously. So we’re going to help him out.”

“Like matchmaker?” Sasha asks, his expression, if possible, becoming even more skeptical.

It’s Bo’s turn to shrug. “Maybe. But in the meantime, we’ll be his temporary boyfriends. Have him over for dinner more often, cuddles, that kind of thing. Keep him from getting so lonely and wound so tight.”

“Can you imagine David going for that?” Bo laughs, picking up his fork.

“Yeah,” Sasha says, his voice gone low and rough in a way that makes Bo freeze, a forkful of salmon halfway to his mouth.

He forces his hand to start moving again. “Goddamnit, Sash. No. The last time this happened the food was cold and disgusting after. Finish your dinner before you start talking dirty to me.”

Sasha grins back at him. “I have good imagination.”

“Fuck you, I know. Eat your damn dinner.”

Enter the Rafflecopter Giveaway for a chance to win a $20 Amazon gift card.