Professor Nate Reese rushes to protect a female student and is severely injured at the hands of her assailant. Traumatized by the attack, Nate sets his feet on a no-holds-barred path of activism designed to force university officials into addressing the issue of on-campus assault. At the same time, terrified of losing his hard-won status at the university, his partner, David Gardener, a veteran of 12 years as a very popular Professor, is reluctant to support Nate's militant efforts. Seemingly abandoned by his partner, Nate sees David's aversion to his activism as indifference to the trauma he suffered. Day by day they watch as their relationship disintegrates, while still struggling to resolve the disruptive issues engulfing the school they love.

In the meantime, Irishman Colin Campbell, handsome and charismatic Sergeant for the campus police force, fights his own on-going war against campus assault. But behind his obsessive desire to gain justice for victims lies a devastating secret which could forever destroy his fiercely independent facade and expose his deepest fear. Ultimately, it is Colin’s powerful connection to a steady, dark-eyed Title IX consultant which threatens to tear down his defenses and shatter the barriers protecting his heart.

Cocky and irresistible, the dynamic police officer was everything Joshua Abrams had ever longed for in a man, but Colin simply didn’t ‘do’ relationships. Unless Joshua would settle for a one-night stand, or a very short-term liaison, there was no room for him in Colin’s life. Yet even knowing this, he couldn’t keep himself from falling hopelessly in love with his ‘magic man’. Despite the passion between them, he knew his quiet, reclusive nature could never hope to entice the vibrant, freedom-loving Irishman, so eventually he begins to back slowly away.

Eventually, a disagreement over an oddly disturbing case causes Colin’s hot Irish temper to erupt and their relationship is irrevocably shattered. Heartbroken, and convinced that Colin is gone forever, Joshua flees Charlottesville without a word, leaving Colin adrift and inconsolable.

But Joshua Abrams hadn’t merely stepped over the indelible line Colin had drawn between his heart and the dangers of real love, he had burned through it like hot lava. Finally forced to acknowledge his love for Joshua and his desperate need to have the quiet, Jewish man by his side, Colin must now face the dark and long-suppressed memories which are irrevocably linked to his love for the handsome consultant. Without even a forwarding address to guide him, he vows to find Joshua and bring him home. Colin’s struggle to conquer his pride and fear in order to find the love of his life and achieve their happily ever after will touch your heart.

Four lives in turmoil fighting for the relationships they cherish, and at the heart of the struggle, a great university struggles to survive its most harrowing challenge. 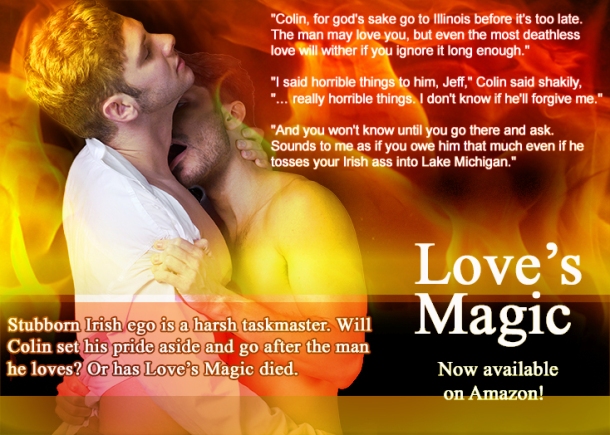 Colin nodded, shaking his head as if trying to clear it. His fists loosened and he relaxed against Joshua's body soaking in the solid strength of his presence. "That day I blew up at you," he began after a moment. He lifted his head and met Joshua's eyes. "Jesus, Josh, I thought I was losing my mind! I totally lost it."

"ls a dead ringer for my sister, Kathleen," Colin finished, then shook his head again. "Hell, even my mother saw it." His head fell forward and he once again rested his forehead against Joshua’s shoulder.

"There's a lot more," he said, his voice still shaky. "A shit-load of stuff I should probably be telling a shrink... how I couldn't cry at her funeral or ever since then, how I got revenge against the bastard who raped her by catching guys who'd done the same to other girls...," he exhaled a sigh that seemed to come from the soles of his feet then glanced up at Joshua again. "And on and on and on..." He shuddered.

Joshua laughed softly. "You may not realize it," he murmured, "but you are telling this stuff to a shrink."

Colin exhaled a quiet laugh then released Joshua and leaned back. He scrubbed both hands through his hair and gazed quietly toward the lake. "I came here to explain what happened the day we quarreled and why it happened. But that's not the most important reason I'm here." He met Joshua's eyes. "I came here to ask you to forgive me and come back to Virginia with me."

Joshua met his gaze. "It had to have been hard," he said softly. "Coming here like this. Telling me all this. Took a lot of courage."

Colin snorted a cynical laugh. "Courage," he said scornfully. "I've been lurking in my apartment like a coward for months."

"How many people have heard the story you just told me?" Joshua asked.

"Then shut-up. When I say it took courage I know what the fuck I'm talking about. Don't ever call yourself a coward again."

Colin glanced at him and smiled.

"This is what I do for a living, remember?"

Colin nodded. "Point taken. Now tell me you're coming back to Virginia with me."

Joshua sighed, his full lips pressed into a thin line. "Colin..." he frowning as if in pain. "Jesus, Colin."

"You don't believe in him," Colin observed with a half-smile."

Joshua shot him a look. "Fact is, we do, but that's not the point. Colin, I've got a job. I've made peace with my family... actually grown close to them. I've started to feel happy here. I don't know if I..."

"When does the job start?"

"Next week," Joshua told him.

"Screw the job. Tell them you changed your mind. You have to come back with me."

Joshua stared at him, his mouth half-open. "Colin, wait. Wait. Just let me…" He leaned back, shaking his head. "This is all happening too fast."

"No, it's not. It didn't happen nearly fast enough!"

"So I can come back to Virginia and be your fuck buddy?" Joshua asked then shook his head and pulled away, his hands dropping to his sides. "We've talked about this. I can't do it, Colin. Not with you. I just ca-"

"No!" Colin interrupted. He re-captured Joshua's hands in his. "No, Josh! That's not what I want!" He stared down at their joined hands for a count of three, as if gathering courage then inhaled deeply and spoke: "There are no fuck buddies. When you left Virginia any desire other men went with you. I just want you, Josh. Only you. No one else. Just you." He shook his head and looked at Joshua, quirking his brow comically.

Joshua pulled his hands from Colin’s grip and captured the handsome Irish face between his palms. "Listen to me," he said, staring into Colin's eyes. "You've never wanted an exclusive relationship. Not with me. Not with anyone. Why is it different now?" His hands dropped to his sides. “Why?”

Colin sighed again and gave Joshua a rueful smile. "Hang on a second, OK?" After a moment he drew in another deep breath and recaptured Joshua’s hands in his own. "I -" he began, then glanced up at Joshua and swallowed hard. "It’s different now because I love you, Josh." His eyes widened. "Holy crap."

They both gave a short burst of laughter at the surprise in Colin's voice, then sat in silence, hands clasped while the lowering sun cast evening shadows over their shelter amid the driftwood. Finally, Colin lifted Joshua's hand to his lips and kissed it.

"That's about it, buddy. That's my full confession. I'm sure there's stuff I've left out, but if you come home with me I'll hire you as my full time shrink and you can get the rest of it out of me a little at a time." He collapsed forward into Joshua's arms and moaned. "Oh, Christ, Josh, I'm so fucking tired."

Joshua stroked his back nuzzling against his hair. "I don't doubt it."

"Is this what you call a breakthrough?" Colin asked, his voice muffled against Joshua's down jacket.

"More like a break down," Joshua replied, smiling, his hand still moving in slow circles on Colin's back.

Colin lifted his head and looked into Joshua's dark eyes. "Tell me you'll come home with me," he said. "Please." He lifted his hand and twirled one of Joshua's curls slowly, sensuously, around his index finger. "Please," he repeated in a hoarse whisper. "I need you, Josh. Nothing's right in my life without you."

He felt Joshua's presence in that moment as a still pool, a quiet and serene place of healing and love beyond any condition or expectation. And the truth of his words echoed through every fiber of his being. "Josh," he whispered, "I love you. Please come home."

My name is Jan Jarrell. I am a 76-year-old retired grandmother who lives in Seattle, WA. I have been a writer of slash fan fiction for almost twenty years under the name Rakshi. I have written both RPS fiction and FPS and my list of works stands at three hundred and thirty-seven, including stories as short as drabbles (stories of 100 words) and a series which was 119,012 words long. You can find my works on Archive of our Own and on LiveJournal under the username Rakshi.

I began writing original character fiction about a year ago and I love it more than words can say. This creative outlet has made my retirement years the best ones of my life. I tend to fall in love with my characters and always want to give them the happy ever after that I just know they deserve.

Enter the Rafflecopter Giveaway for a chance to win one of two $10 Amazon Gift Cards. 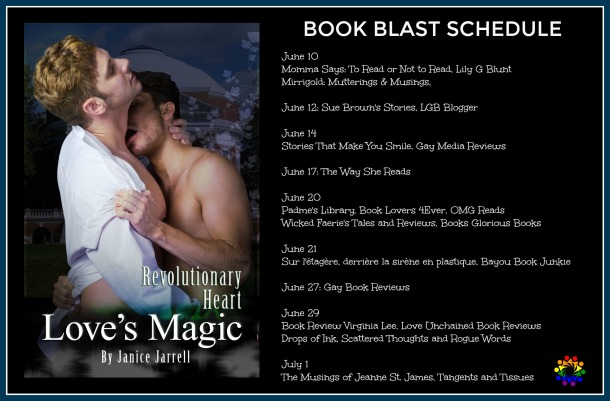