Promises by Ruby Moone - Release Blitz with Excerpt and Giveaway 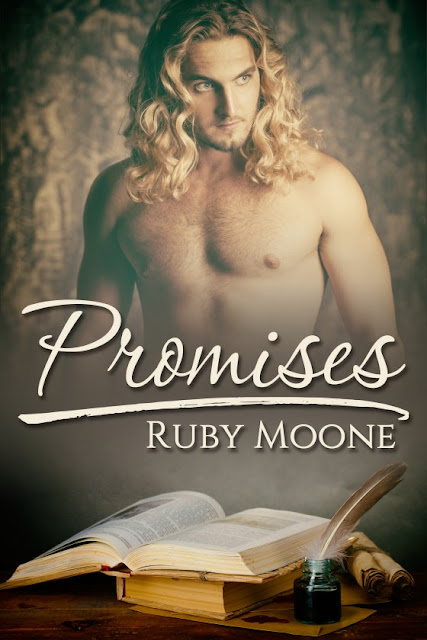 Captain Charles Hawkins has returned from the Napoleonic wars desperate for solitude. When the man who saved his life asks a favour, he feels honour bound to agree, but the request fills him with horror.

Sebastian Farrah knows the only useful thing he can do with his life is join Wellington’s army. He has tried everything else and failed. He agrees to his brother’s ridiculous request to spend a month in the country because it is the only way his brother will agree to purchase him a commission.

Charles and Sebastian clash but quickly form a bond that deepens into much more. However, they are running out of time. Charles begs Sebastian to stay, but Sebastian knows to do so he will be forced to reveal what it is that stopped him from succeeding in everything. The shameful secret he carries from the schoolroom.

Another week passed, and Farrah had become an integral part of the household. He was everywhere. Working in the garden, eating with him, accompanying him when he left the house to tour around the estate, working with him with the shipping company, although he was still curiously resistant about that. Charles watched him apply himself to his evening meal with gusto. The man ate like a horse but hadn’t a spare inch on his frame. All the physical work meant that he had arrived in reasonable shape for someone who did nothing but gamble and drink, but now, now he was bursting with good health, humour, and a physique that made Charles want to weep with envy as he thought about his own skeletal frame. There was a warmth to his companionship that made getting up in a morning easier. He realised just how much he was enjoying having him in the house. As they talked, he hoped that he was helping Farrah to see that there were options open to him that didn’t involve him risking his life on the continent. To see that there were a whole host of things that he was good at. Farrah’s comment about the army being all he was good for had stayed with him and it surprised him how annoyed it made him that his family had allowed him to feel that way, and constantly surprised that Farrah seemed to believe it.

Coulson arrived with the tea tray and Charles smiled as he realised Farrah had lost that slightly frantic look he’d had on realising there was no port or brandy on his arrival. When Coulson had retreated, Charles raised his cup in a toast.

Farrah laughed and raised his cup in response. “Congratulations on putting up with me for another week. You deserve a medal, Captain Hawkins.”

Farrah tilted his head on one side and observed him. “You really are the best of men. I know I’m not easy to have around. Too loud, too ... much.” He laughed again.

And there he went again. He really seemed to believe that his company would not be valued. That he would be some sort of burden. Charles was stunned when he realised that in that moment he wanted nothing more than to take him in his arms and tell him in no uncertain terms that having him in the house was no hardship, and not only that, he discovered he wanted to hunt down the people who had told him that he was a burden, or a nuisance, and hurt them. It was a disconcerting.

He had to fight to retain his composure and answer in kind. “Piffle. You’ve brightened the place up no end. Once you’d sobered up, that is.” He kept his tone light, but his heart was thumping.

For a big, handsome, seemingly confident man sometimes there was a hint of such wistfulness about him, and it was there full force in that softly spoken word. It was filled with such fragile hope it hurt something inside Charles.

“Really.” Charles spoke softly and something in Farrah brightened. “Now, stop fishing for compliments and tell me what the plan for tomorrow is.” He had to resume his usual brisk tone because if he didn’t, he would have ... Charles' heart stopped in his chest. Oh God. Oh God.

He wanted to kiss him.

My name is Ruby Moone and I love books. All kinds of books. My weakness is for romance, and that can be any kind, but I am particularly fond of historical and paranormal. I decided to write gay romance after reading some fantastic books and falling in love with the genre, so am really thrilled to have my work published here. The day job takes up a lot of my time, but every other spare moment finds me writing or reading. I live in the north west of England with my husband who thinks that I live in two worlds. The real world and in the world in my head...he probably has a point!