The Long Way Around by Quinn Anderson - Blog Tour with Giveaway 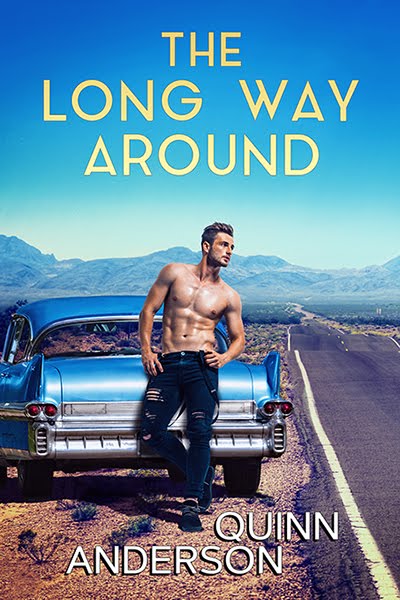 I’m Quinn Anderson, author of Fourteen Summers and the Murmur Inc. series. Welcome to my blog tour for The Long Way Around! Stay tuned to get fun facts about this release, learn about our leading men, and hear about the many road trips I took in my antique car, Lou. Leave comments for a chance to win a $10 Riptide gift card. I look forward to chatting with you all!

About The Long Way Around

Sam Cooper is the definition of an introvert: shy, bookish, and the sort to think a wild Friday night involves ordering takeout. He enjoys his quiet life, but after a bad breakup, he’s been yearning for a change of scenery. Luckily, his best friend and former college roommate has the solution.

Wesley Reed—a jokester and expert Sam-handler—proposes an epic road trip to a wedding across the country. They’re both between jobs and boyfriends. Why not hit the open road and make some memories?

Stuck in close quarters for the first time since their dorm days, they’re both surprised at the heat that springs up between them. As best friends, they’ve shared so much over the years, so why does sharing a hotel room—and occasionally a bed—make them want more? Chemistry this smoldering is hard to ignore, but there are road blocks to their romance. Wesley’s keeping a secret, and Sam can’t rely on Wesley to drag him out of his comfort zone forever. If they’re not careful, their relationship may take the ultimate wrong turn.

To celebrate the release of The Long Way Around, Quinn is giving away a $10 Riptide credit! Leave a comment with your contact info to enter the contest. Entries close at midnight, Eastern time, on August 11, 2018. Contest is NOT restricted to U.S. entries. Thanks for following along, and don’t forget to leave your contact info!