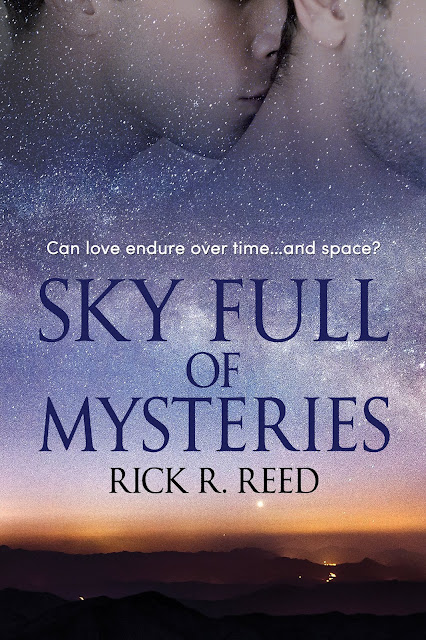 What if your first love was abducted and presumed dead—but returned twenty years later?

Where has Rory been all this time? What happened to him two decades ago, when a strange mass appeared in the night sky and lifted him into the heavens? Rory has no memory of those years. For him, it’s as though only a day or two has passed.

Rory still loves Cole with the passion unique to young first love. Cole has never forgotten Rory, yet Tommy has been his rock, by his side since Rory disappeared.

Cole is forced to choose between an idealized and passionate first love and the comfort of a long-term marriage. How can he decide? Who faces this kind of quandary, anyway? The answers might lie among the stars….

Cole patted his back pocket, making sure his wallet was still there. He hoisted himself up from his seat and left the train’s air-conditioning for the humid night. There were several trains in the station, all huffing and puffing as they idled, reminding Cole of dragons. Even this late, there were still people hurrying to and fro on the platform.

Cole headed for the stairs and hurried down. Home was only a ten- minute walk from the station, and Cole was now actually grateful for the nap. If that boy’s not up when I get home, he thought with a grin, I’ll just have to poke him awake.

When he reached the courtyard of their building, the exhaustion Cole had felt on leaving work entirely vanished. He was ready to howl at the moon. He wished only he’d thought to stop off at a convenience store or something so he could have brought Rory a little surprise, maybe a box of Swedish Fish or a roll of SweeTarts. He’d have to find other ways, he supposed, to thrill his sugar-loving man. He’d give him some sugar, all right.

Cole unlocked the front vestibule door and headed into the cool tile lobby of their building. He loved the 1920s vibe of the lobby and the building in general, glad no one in all the ensuing decades since it had been built had decided the gem of a vintage building needed updating. He loved the mica-colored wall sconces and the Mediterranean floor tile. He even loved the battered brass mailboxes along one wall.

He stopped to check the mail, found the box empty, and headed for the elevator.

Out front, Cole hoped Rory had left the door unlocked for him. No such luck. He fished his keys from his pocket and quelled his first impulse, which was to shout, “Honey, I’m home!” at the top of his lungs. If the poor guy was asleep, Cole reasoned, let him sleep. There were subtler and much more pleasurable ways to wake him.

As he made his way through the living room and toward the bedroom, he dropped clothing as he went. He also shut off the lights Rory had thoughtfully left on for him. By the time he reached the closed bedroom door, he was smiling and sporting an erection.

He opened the door slowly. It took his eyes a moment to adjust. They had, in fact, thumb-tacked a sheet over the sole window, so the room stayed pretty dark.

Cole groped his way to the bed, suppressing a giggle.

But when he got there, the giggle died on his lips. He felt around the surface, up, down, left, right, as though his own hands deceived him. He frowned and then turned to the light switch on the wall and flicked it. The room filled with warm yellow light. No Rory. Cole hadn’t expected that, and he cocked his head. Absurdly, he looked around the room, thinking maybe he’d find Rory sitting on the chair they used to pile their clothes on before hopping into bed for the night. Maybe he’d rolled out and was fast asleep on the braided rug they’d positioned beneath it.

But the room was empty. Unusually neat—the bed made and no clothes lying on the chair in the corner. Cole crossed the room and opened the door to the single closet. Maybe Rory was hiding from him? One of the things they both loved about the apartment was the size of the bedroom closet. It was walk-in, with rods on either side, shelving above, and even a window that looked outside. Rory could be weird. Maybe he lay within, naked and waiting, ready to pull out all the stops on yet another fantasy.

But the empty closet mocked him. Where was he?

Cole retreated from the bedroom. “Rory? Babe?” Cole made a quick tour of the small apartment, knowing as he did it that the search would be wasted effort. And it was. Rory wasn’t in the living room, the dining room, kitchen, or bathroom.

Cole returned to the bedroom and ran his hands along the top of the dresser. Rory usually left his wallet and keys on top of it. But just like the rest of his search, this maneuver was only an empty gesture. Rory’s keys and wallet were gone, indicating he was still out there somewhere.

That was odd. Cole glanced at the alarm clock on the nightstand and saw it was approaching twelve thirty. Cole knew Rory had to be up early for work in the morning—he had flex hours at his job and liked to work the earlier spectrum—usually seven thirty to four. And Rory loved his sleep! Sometimes he dragged Cole to bed as early as nine o’clock. Cole never complained.

So what was he doing out so late on a school night?

Cole plopped down on the bed, head in his hands. Don’t panic. Don’t even worry. It’s most likely nothing at all. Maybe he got over his aversion to gay bars and is down on Halsted Street, living it up, downing shots backed up by beers. The thought made him chuckle, as that scenario was about as likely as Cole being on a jet bound for Paris, France. Still, in spite of its improbability, the notion did cause a stab of jealousy to jab at Cole—right in his solar plexus. Sure, Rory might be one of the few gay men their age Cole knew who actually didn’t like to go out to bars, but he still could have. It was possible, as he might say if queried on a witness stand in some court of law. Cole felt sick to his stomach as he allowed himself to think what was lurking at the back of his mind, like some black shadow. It was also possible that Rory had gone out and hooked up with someone and lost track of time.

Cole licked his lips, mouth suddenly dry. He had a lot of gay male friends and acquaintances and knew fidelity was a fairly rare thing, even among the ones who claimed to be in committed, monogamous relationships. Why, some of those fellas had even come on to Cole when the boyfriend was out of town or just out of the picture.

Maybe their relationship wasn’t as solid as Cole thought? Rory could have been tempted. It was possible. He was a cute guy who didn’t know it, which made him even cuter. He could see him being hit on— and maybe if he was lonely or bored, he might have given in? Are any of us truly immune to temptation?

No. Not Rory. Cole knew in his heart of hearts that Rory would never cheat. He just didn’t have it in him, literally or figuratively.

So where are you? Cole stood and began pacing. He pulled aside the sheet tacked up over the window to look outside, hoping against hope he’d see Rory down there on the beach. He did see someone, a guy, sitting on the sand at the edge of the beach, his feet pushed into the waves. But even from up there, Cole could tell the guy had at least fifty pounds on Rory, if not more. And he was smoking....

A woman walked by. A big dog, maybe a pit bull, dashed ahead of her, splashing at the edge of the surf. Cole could see the leash in her hand. She called the dog back, and it sounded to Cole like its name was Pashmina.

There was no one else on the beach this late.

Rick R. Reed draws inspiration from the lives of gay men to craft stories that quicken the heartbeat, engage emotions, and keep the pages turning. Although he dabbles in horror, dark suspense, and comedy, his attention always returns to the power of love. He’s the award-winning and bestselling author of more than fifty works of published fiction and is forever at work on yet another book. Lambda Literary has called him: “A writer that doesn’t disappoint…” You can find him at www.rickrreed.com or www.rickrreedreality.blogspot.com. Rick lives in Palm Springs, CA with his beloved husband.