Shelter From the Storm by Kate Sherwood - Blog Tour with Giveaway 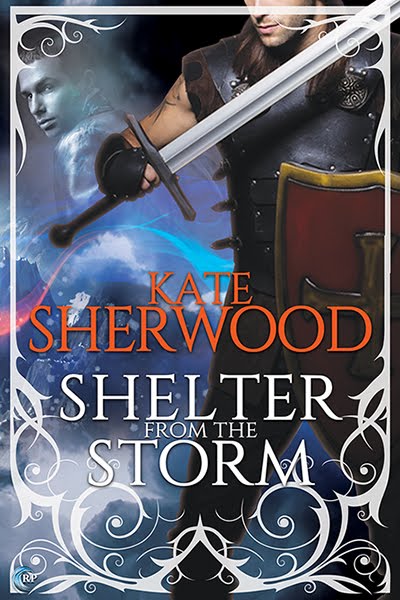 About Shelter from the Storm
A healer and a warrior fight to survive the winter . . . and each other.
Grif is tired of life as a mercenary—tired of life, period. So he heads off into the mountains, not much caring whether he lives or dies. But when his indifference leaves him unconscious in a snowbank, a stranger finds him and insists on dragging him back from death.
Kiernan doesn’t really have time to nurse a stranger back to health; he’s on an important mission. He doesn’t know why the message he’s carrying is significant, but he’s determined to deliver it, even if it means risking his life in the winter mountains. Still, he can’t just walk away from a fellow traveler in need.
Grif didn’t want to be saved, and he sure as hell doesn’t want to be stuck with an annoying, naïve do-gooder. But since when do the mountains give men what they want?  The snow is too deep to travel. Food is scarce. Grif and Kiernan learn to depend on each other, and eventually to care about each other. Neither of them wanted it to happen. But sometimes the mountains don’t give men what they want; sometimes, the mountains give men what they need.

About Kate Sherwood
Kate Sherwood started writing about the same time she got back on a horse after almost twenty years away from riding. She’d like to think she was too young for it to be a midlife crisis, but apparently she was ready for some changes!
Kate grew up near Toronto, Ontario (Canada) and went to school in Montreal, then Vancouver. But for the last decade or so she’s been a country girl. Sure, she misses some of the conveniences of the city, but living close to nature makes up for those lacks. She’s living in Ontario’s “cottage country”--other people save up their time and come to spend their vacations in her neighborhood, but she gets to live there all year round!
Since her first book was published in 2010, she’s kept herself busy with novels, novellas, and short stories in almost all the sub-genres of m/m romance. Contemporary, suspense, scifi or fantasy--the settings are just the backdrop for her characters to answer the important questions. How much can they share, and what do they need to keep? Can they bring themselves to trust someone, after being disappointed so many times? Are they brave enough to take a chance on love?
Kate’s books balance drama with humor, angst with optimism. They feature strong, damaged men who fight themselves harder than they fight anyone else. And, wherever possible, there are animals: horses, dogs, cats ferrets, squirrels… sometimes it’s easier to bond with a non-human, and most of Kate’s men need all the help they can get.
After five years of writing, Kate is still learning, still stretching herself, and still enjoying what she does. She’s looking forward to sharing a lot more stories in the future.
Connect with Kate:
Website: http://katesherwoodbooks.com/Twitter: @kate_sherwood
Giveaway
To celebrate the release of Shelter from the Storm, Kate is giving away a $10 Riptide credit! Leave a comment with your contact info to enter the contest. Entries close at midnight, Eastern time, on August 26, 2018. Contest is NOT restricted to U.S. entries. Thanks for following along, and don’t forget to leave your contact info!