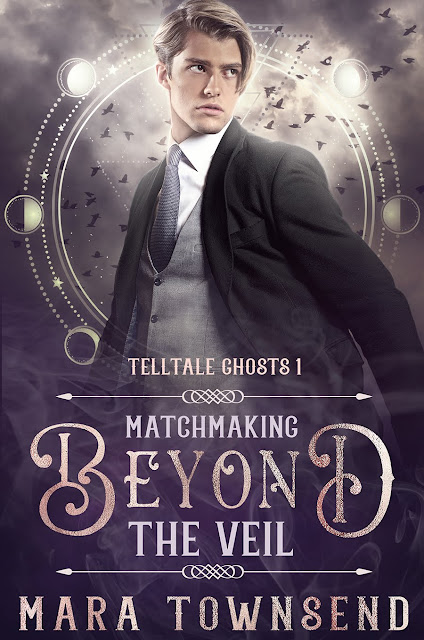 Matchmaking Beyond the Veil by Mara Townsend

Emery Belmont is a snarky realist who likes his life ordinary. Like any skeptic, he’s content using mundane explanations to write off signs of paranormal activity. That’s no longer an option when the spirit haunting his house wrecks his new kitchen, forcing Emery to face the supernatural truth. Desperate for a new handyman, he unknowingly hires his hot ex-rival from high school to fix it. Paxton Santos, Emery’s former lacrosse team captain, followed in his father’s footsteps to take over the family business. Annoyingly, Emery requires his talented hands more than he needs to keep Paxton out of his life. However, getting Paxton to leave after the repairs may prove difficult with the meddlesome ghost taking a shine to him, which Paxton seems to take in his grating, good-natured stride, remaining irritatingly unruffled by numerous weird occurrences.

Emery is bombarded by paranormal hijinks, keeping Paxton at arm’s length, and solving an inescapable mystery. There’s nothing Emery hates more than an unfinished puzzle. In his determination to solve this one, Emery reluctantly opens himself up to new possibilities all while trying to remain firmly rooted in life the way he prefers it—orderly, logically explainable, and, above all else, ghost-free.

Join Emery and Paxton as they face off with a spirit that has no limits to how far it will go to push them together, enduring locked doors, faulty plumbing, and sharing a bed. Together they are determined to navigate their way out of this mess using any means necessary to send the ghost packing. Will they make it out of the traps awaiting them before their pesky tormenter gets any other ideas to make things worse and further blur the line between them?

Matchmaking Beyond the Veil is a 100k slow burn MM romance tale of rivals to friends to lovers. Featuring a meddling ghost playing at matchmaker, forced proximity, bed sharing, ghost tours that totally aren’t dates, and tongue-in-cheek humor. This story ends on a HFN ending with a soft cliffhanger. Emery and Paxton’s story will continue in Telltale Ghosts Book 2. This book contains denial, two men experimenting with sex magic, fighting what the heart wants, and steamy explicit sexual scenes and colorful language intended for adults 18 and older.

Two movies later and Emery came slowly out of a doze after drifting off sometime in the middle. He dragged in a deep inhale, arms curling overhead to stretch. The lights were dimmer than when he went to sleep and he blinked drowsily. Paxton’s head was resting against his shoulder, nose turned into his neck. His steady, even breaths fell over Emery’s skin and crept into the loose collar of his v-neck shirt.

Even the volume on the tv was lower, though Emery didn’t remember turning it down. The clock on the mantel told him it was after eleven. Stretching again, a small sound escaped his throat and Emery got up. Paxton didn’t wake right away, slumping further against the sofa in sleep. When his cheek hit the cushion instead of Emery, he woke with a small startle.

Paxton made an incoherent, sleepy sound that pierced through to Emery’s heart. Rubbing his face with sluggish movements, Paxton peered up at him blearily.

“Not too late. Nearly half past eleven. We fell asleep,” Emery said. “Let’s go up to bed.”

It didn’t escape Emery’s notice that Paxton could take that like he was inviting him to his own bed. Apparently it didn’t escape the ghost’s, either, because the lights dimmed dramatically, almost snuffing out. Emery blinked in the low lighting, eyes adjusting.

Paxton held out a hand. Emery supposed he wanted a boost off the sofa. It was such an innocuous, everyday moment that he accepted Paxton’s hand and hauled him to standing with a tug. Paxton nearly stumbled into him, catching his balance with a hand on Emery’s shoulder. Sleep softened him in a way that Emery found alluring.

He swallowed and licked his lips. “Bed, yeah?”

“Mhm,” Paxton agreed, heaving a big sigh. He swayed a little on his feet and mumbled, “Bed.”

Emery turned off the media center and the room plunged into darkness on its own. Emery could feel the chill descending on the room, indicating the ghost’s watchful presence. This time it didn’t make his heart stutter because Paxton was with him, half asleep on his feet.

“We’re going to bed. That’s what you want, right?” Emery asked the quiet room. The clock on the mantel ticked. Paxton muttered incoherent syllables under his breath and huffed. Emery was pretty sure he was sleepwalking. “I’ll take your silence as a yes.” 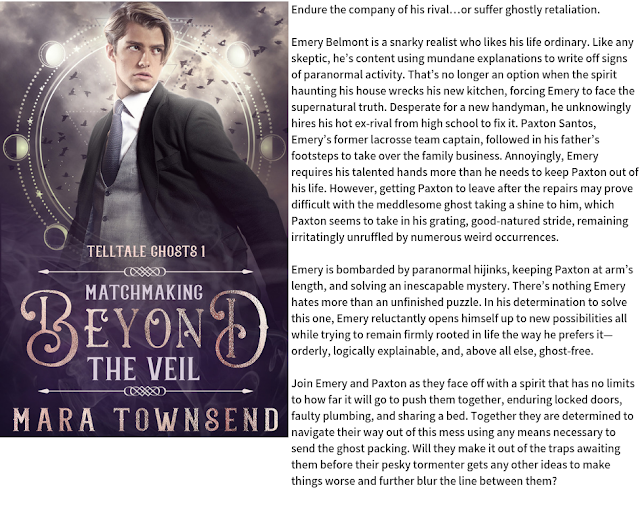 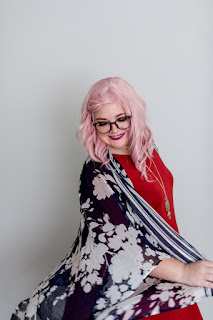 Mara Townsend is a bisexual indie author of LGBTQ+ romances. She loves to explore intimate relationship development of the feels-inducing variety to invoke the eternal just kiss plea from the reader, as well as crafting strong platonic friendships with heaps of heart and soul. Her stories showcase diverse representation, love stories with realistic emotions—never mindless fluff, a healthy dose of humor, and a side helping of her favorite tropes.

She hangs out in fan communities online and learned how to write the kind of stories that she’s passionate about through experimental character-driven fiction based in her favorite worlds. When not writing, she can be found soaking up sunshine at the beach, traveling the world to fill in her passport, perpetually collecting plants, and reading as many fake-dating romance books as she can find.

Giveaway:
Win a physical copy or a e-copy of Matchmaking Behind the Veil: