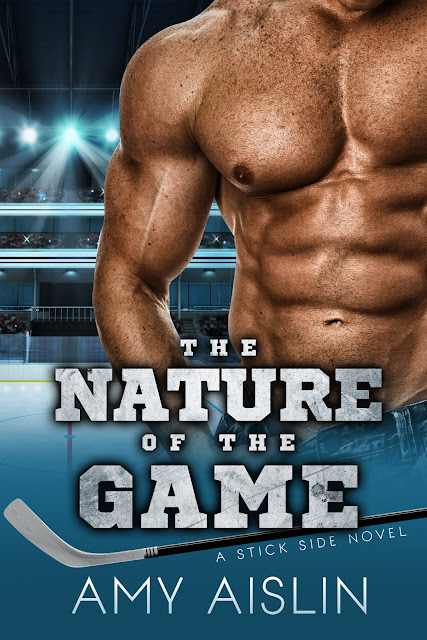 The Nature of the Game by Amy Aislin

Book synopsis: Six years ago, an ultimatum forced Dan Greyson to make a choice that cost him everything he loved most. One of those things? His boyfriend, hockey player Ashton Yager. Now that they’ve crossed paths again, Dan isn’t about to let the opportunity slip away. Ash’s reappearance in his life is just the catalyst Dan needs to escape the rut he’s fallen into…and win back Ash’s trust and love.

Ashton Yager, once burned and now a little bit shy, didn’t mean to publicly come out as bisexual. But now that he has, he’s got to deal with the consequences, including the fact that it might’ve cost him his NHL contract. With his job on the line, he needs to keep his head down, work hard, and play the best hockey of his life. Rekindling things with Dan? That’s not exactly keeping a low profile. It’s also never going to happen, not after Dan walked away once without an explanation.

When a hurricane forces Ash to seek shelter out-of-state, he and Dan find themselves in the same B&B, where old feelings resurface. But with everything Ash has on the line, does he dare play with fire again?

“You hate me, I get that. I’m sorry I made you uncomfortable back there.”
Ash scowled. “I don’t hate you.” He realized the scowl might say differently and smoothed out his features. Pleasant, yet distant. Too bad his eyebrows weren’t cooperating this time. “And you didn’t make me uncomfortable.” What he did do was make Ash relive a period of his life he thought he’d set aside. Gotten over. Earmarked as It was fun but it didn’t work out.
It annoyed him more than anything, mostly. Especially since, sometimes, usually in the middle of the night, Dan turned into the one that got away
“Sure you don’t,” Dan said, sarcasm dripping off his tongue. “Thank you for getting me out of the brunch. I needed to breathe. But…” His smile was so sad it might as well’ve been upside down. “This is all we need to see of each other. You don’t have to put up with me anymore.”
Ash’s arms fell to his sides, Dan’s words making him feel like he’d accidentally revealed that Santa Claus wasn’t real. “Your brother and my best friend are in a committed relationship. I’m pretty sure we’ll see each other again.”
“Don’t sound so thrilled by it.”
“What do you want me to say, Dan?” Figuring some honesty might not hurt, he said, “This isn’t easy for me.”
“And you think it’s easy for me?”
“You’re the one who walked!”
“I didn’t have a fucking choice!”
“You— What?”
“Oh, but you don’t want to hear about it.” Dan’s arms flailed, face a thunderstorm about to go off, body coiled to spring.
“Dan—”
“You know what the worst part is?” Quiet now, he closed his eyes and took a deep breath. “It’s not that you hate me. I hate myself enough for the both of us. It’s that everything I did was for nothing. I lost the two people who meant the most to me . . . for nothing.” The last two words were harshly whispered, and when Dan’s eyes opened—his light brown eyes that Ash had stared into so many times, that had stared back at him with love and friendship—they were soft and so full of regret that Ash found himself reaching for him. “Give this to Mitch, will you?” Dan handed Ash his milkshake and backed away. “I need to take a walk.”
Before Ash could utter a word, Dan was swallowed up by the crowd. 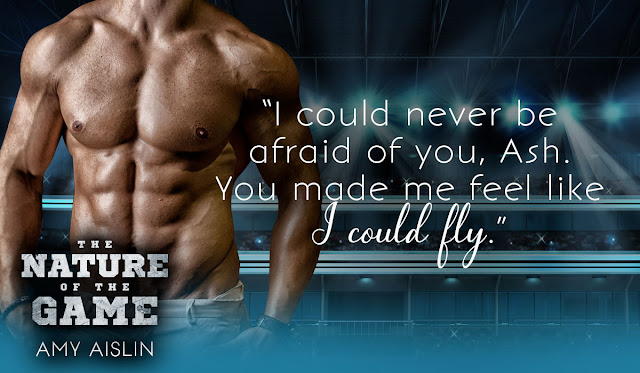 Win a Stick Side prize pack, including signed paperbacks of books 1 and 2 in the series, as well as some Stick Side swag! Contest open internationally. Enter via Rafflecopter. Contest ends at 12:00am May 12.

Exclusive Mini-interview with Amy Aislin for the Release Blitz:

How do you handle writer’s block?
I’m a panster, not a plotter, so I always start out writing a novel not knowing where it’s going to go, but also not fully knowing my characters either. I’ve found that when the writer’s block hits, it’s because I’m not yet fully acquainted with my characters. I don’t know them well enough. What do they really want, both internally and externally, and what’s preventing them from getting it? Once I have that nailed down, the story starts to develop much more smoothly.

How many books have you written? Which is your favorite?
The Nature of the Game is my eighth published novel, which is how many books I’ve written. I’d say my favourite is On the Ice. Not only was it the easiest book for me to write—I was very intimately acquainted with the characters before I started writing—but it’s the book of my heart. It’s a slow-burn, friends to lovers story with a flirty college hockey player who meets his match in a demisexual NHL player. There’s a small part of me in most of my books, however certain facets of who I am are strongly reflected in both Mitch and Alex (the main characters in On the Ice), so it’s also a very personal book for me.
Do you have a favorite cover from one of your books?
My favourite cover from my books is the cover for As Big as the Sky, which was released in August 2017. My cover designer, Melody Pond, took my instructions and gave me back something that was a hundred times better than I’d imagined. The pink cover, flowers in the foreground, and house in the background perfectly set the mood of this low-angst, feel-good novella.

What's your favorite scene from this book?