I can’t trust my past and relying on my future is no good either. Stopping in Seaside Bay is dangerous. I should move on, but I’m tired. Searching for food and a safe place to sleep consumes me until I land in Seaside Bay. The people here are too friendly. I should take off before someone finds out the truth. When I meet Mike, I know I can’t trust him, but he’s the safest person I’ve ever known.

My life turned upside down when I lost my hand, but moving to Seaside Bay might have saved me. From partying too hard to living the fast life, I was on a path to destruction. Seaside Bay has calmed me and convinced me I love the quiet life. Then Tim stumbles into my life, and everything gets upended. I’m lost without him close.

I’ll change everything for Tim. He’s got a load of heat on him, and I’m not sure I can save him once that heat comes down. Can I save Tim, or will his past consume him?

Tuning the Guitarist can be read as a standalone. 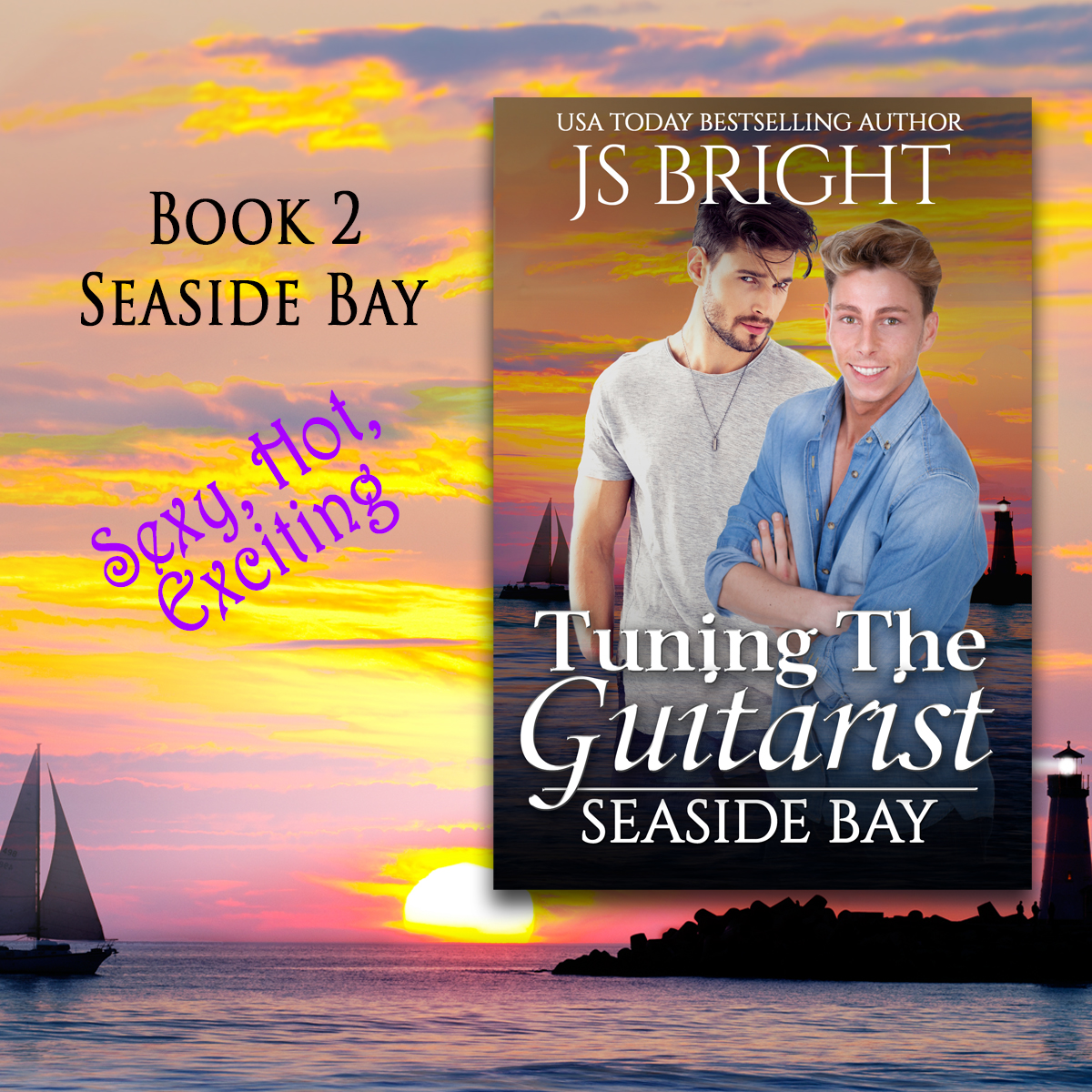 “Hey,” Mike whispered. “I’m heading downstairs. Come down when you’re ready.”
I waited until he had left the room before I dropped to the mattress, stunned by what had happened.
The bathroom called, so I grabbed my clothes then headed across the hall.
After I finished in the bathroom and dressed, I headed downstairs, pausing before I entered the kitchen. Deep breaths calmed me enough so I didn’t faint.
I stepped around the corner and Mike cut his gaze my way, a smile turning up the corners of his lips.
“I’ve made scrambled eggs and English muffins. I’m cooking up some ham right now because it sounded good. I know I said for brunch on Saturday, but I didn’t want to wait. Does this look like enough?” Mike pointed to the pan on the stovetop.
I moved closer and craned my neck to look. Mike set the spatula down and reached out, pulling me close. The look in his eyes made me shiver. Mike brushed his lips over mine in a quick move before he turned back to the food.
“I have a mug ready for you. You just need to pour some coffee up.”
The coffee smelled great as I poured myself a mug. The first sip was marvelous. The warmth and the strength of the brew ate away at the cobwebs in my mind.
“Did Spot sleep inside?” I asked between sips.
“Yep. I fed him some breakfast and let him out. He was tired of being inside and needed his freedom.”
Mike set the plates on the table then moved close and sat next to me. My experience was limited to those times alphas willing to pay to talk to me had sat in my den, my aunt and uncle watching us like hawks. It was weird being next to Mike and not having a chaperone watching my every move. I’d been fine yesterday, but after what had happened in bed, I wasn’t sure how to act.
I took a bite of the ham and cut my gaze to Mike. He was good looking, sexy in a rugged way. His lips were full, his eyes warm. Sometimes, like in the sunlight, the blue in his eyes looked brighter. Right now, his eyes seemed almost dark gray.
Mike met my gaze and smiled. “When you woke up next to me, it felt good. Having you in my arms was magical. What I didn’t like was why you were there. Tell me about the storms.”
My tongue grew thick, and my throat closed up just thinking about the storm and how I’d freaked out. The coffee helped me clear my mind, but I still flinched when a memory hit me square in the chest.
Mike’s hand was on mine, his touch comforting. “If it’s too hard to talk about, we can do this later.”
Anger and pain rushed up, catching me off guard. “You’re too nice,” I spit out. “How can you be so nice and understanding? I’ve spent most of my life with people who have tortured me, I’m not used to this.” Tears filled my eyes and ran down my cheeks. Mike took my hand and tugged me into his lap. Conflict built inside. How did I want Mike and want to reject him at the same time?
Mike didn’t say more. Instead, he held me and kissed the top of my head while I calmed down.
After a moment, I slipped off his lap and finished eating breakfast before I headed upstairs to make sure I had everything. I met Mike in the entryway, ready to head to work. It was weird heading to work. No longer was I a prisoner in my aunt and uncle’s house.
When we stepped outside, the clouds parted and the sun streamed through the trees. I took two steps and paused as a wooden wind chime sounded, the notes deep. “Get on up here, Timothy and help me with this fish.” The words played in my mind, and I spun back to the deck, feeling like my father should be right there. But the memory was a little different, with pots of flowers decorating the area along with a yellow patio chair. Mike turned and lifted his brows but said nothing.
Memories tumbled over me as I followed behind Mike on my way to his truck. What had happened the day my mother died? It was on the edge of my memory, teasing me. The sun streaming in through the trees jogged something in my mind. Whatever was playing with my mind, taunting me behind closed-off sections of memory had happened in an area like this.
I settled in Mike’s truck and the memories fled. We drove to work, saying little to each other. The silence wasn’t awkward. Instead, it was like we were two friends who knew each other well. I guessed Mike knew me better than some based on what we’d done together. Heat filled me and I wanted to hide.
Mike stopped the truck and cut the engine then reached across his body, grabbing my arm with his hand. He had to lean over to touch me with his left hand, sending warmth through me. Being close to Mike felt good, like maybe I belonged with him, or was it just that I belonged in Seaside Bay.
“I want you to know I’m here for you. When you’re ready to talk, I’ll be here. And if you want me in your bed again tonight, I’m ready for that too.”


His words were molten lava to my soul. My only reaction was to nod. The man stirred something so primal inside and I wasn’t sure I would survive. Just being with Mike was wonderful. Being his primary focus would be overwhelming. 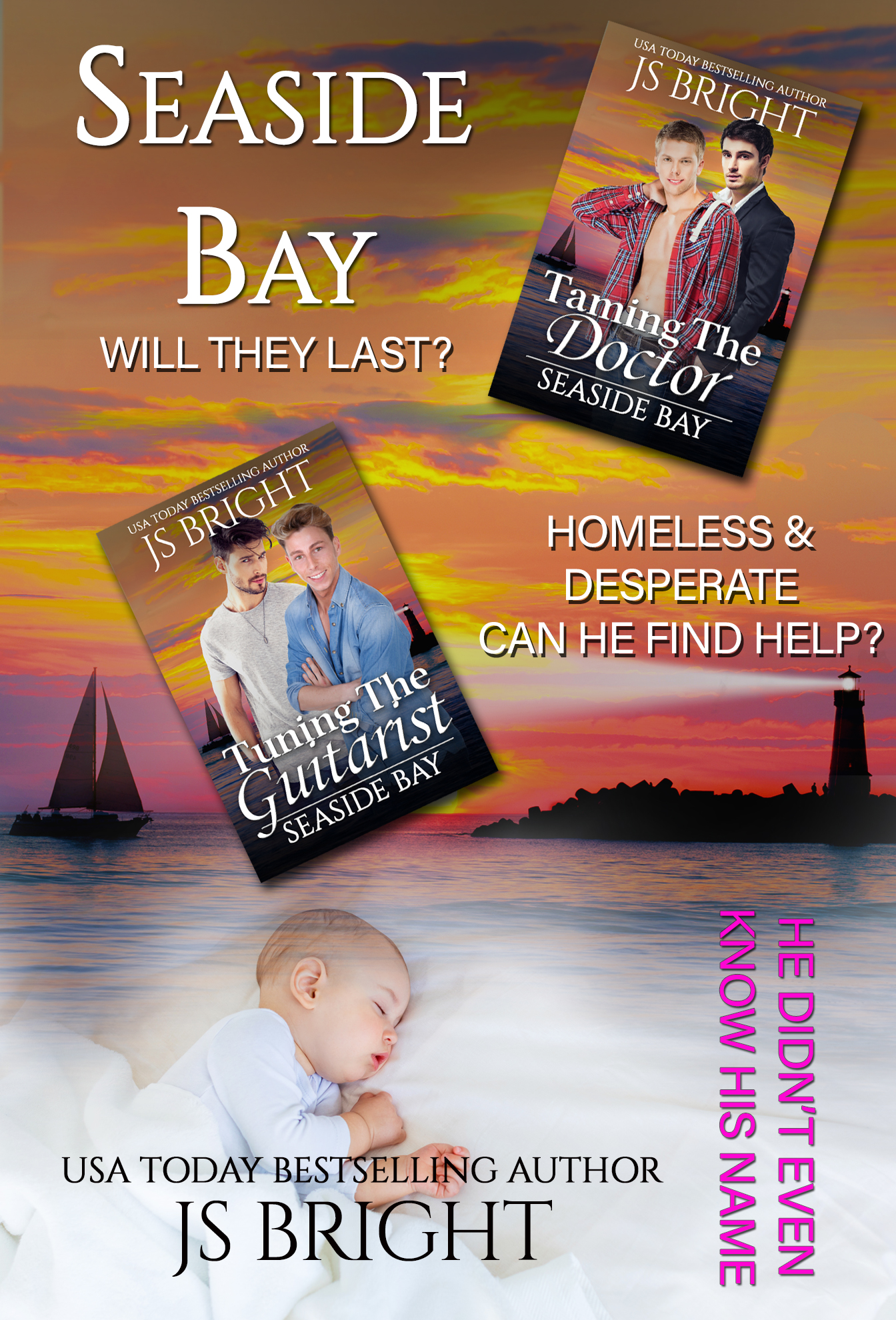 Tuning The Guitarist was one of my favorite books to write. I loved creating the world Timothy and Mike exist in. There’s something special about Seaside Bay.
Mike is a guitarist who had an accident and lost his hand. He almost loses his will to live until a friend suggests running a t-shirt shop in Seaside Bay. It’s the perfect place for him to recover and get his mind straight.
When Mike finds Timothy behind his store he is angry but can’t help but be curious about the guy who spent the night in the alley. He offers to help Timothy who is suspicious of his motives, but based on everything Timothy has known, he shouldn’t trust anyone.
There are touching moments, funny moments, and emotionally charged bits. Here’s an excerpt from Tuning The Guitarist.

Mike helped the customers while I began unloading boxes. I labeled the new shirts with prices and put them on display where Mike wanted. The work calmed me. Mike chatted with the customer then came over after they left.
“Thank you for doing this.”
“It’s fun.” My gaze flicked to his, seeing his brows knit tight. Talking about my life made me nervous. Luckily, the rest of the afternoon was a steady stream of customers coming in to buy long sleeve shirts and sweatshirts so we didn’t return to the subject of my aunt and uncle. The shop had a surprising amount of business. At six that evening, Mike locked the doors and turned to face me.
“I don’t think you should stay at a shelter tonight. Why don’t you come home with me and get a good night’s sleep?”
Mike’s offer seemed too good to be true. “You don’t know me. Why are you inviting me to stay at your house?”
“Contrary to what you think you know, there are good people out there.” Mike headed to the back office, leaving me alone in the main part of the store.
My heart beat faster as I stared after him. His broad shoulders tapered down to his waist. The sight made me want something from him, but I wasn’t sure what. I shouldn’t think about him that way. He was helping me change my luck, not offering himself up for my entertainment.
So much of my life had been spent knowing I was alone in this world and no one would step forward to help me. My aunt and uncle had done terrible things when I’d gone to live with them. Maybe it was worth trusting Mike.
After cleaning up, emptying the trash, and restocking the shelves, I grabbed the hoodie from behind the counter and we left together. He drove a blue truck with a camper on the back. Worry filled me and I hesitated before I opened the passenger side door.
“You aren’t planning on kidnapping me, are you?”
Mike rolled his eyes as he shoved the keys into the ignition and turned the engine over. “I wouldn’t be a very good kidnapper since I allowed so many people to see you with me today.” Mike popped the truck into gear and we took off. “Would you rather have burgers or steak?” Mike was spending too much money on me.
“I’m fine with whatever you have at home.”
“Well, we’re stopping by the grocery store, so you might as well make your requests known. How about we do burgers tonight and I’ll grab steaks for later in the week? Do you know how to cook?”
“Cooking was one of my chores. If I didn’t get a dish right, I had to remake it from scratch. If I made it wrong a third time, she would burn me with the pan.”
“Holy shit. Are you—” Mike stopped talking and shook his head. “I’m sorry. I shouldn’t have yelled. I just—that’s beyond wrong. I’m so sorry.”

The stories are emotional and filled with people overcoming their past hurts. You’ll see more of these characters in future Seaside Bay books You’re sure to fall in love with the people of Seaside Bay.

JS Bright, a USA Today Bestselling author of paranormal romance and reverse harem romance, lives in the south where "bless your heart" is an insult and "shut up" shows love. JS has been reading since they could open a book and has taken the passion for words and combined it with the love of travel to create stories full of passion and excitement.

If you love a good book with a fantastic happily ever after and a paranormal twist, you'll enjoy a JS Bright novel. For a contemporary novel, pick up a Julia Bright book.

For updates and more information, subscribe to Julia Bright