Up Close and Personal by Jay Hogan - Release Blitz with Excerpt 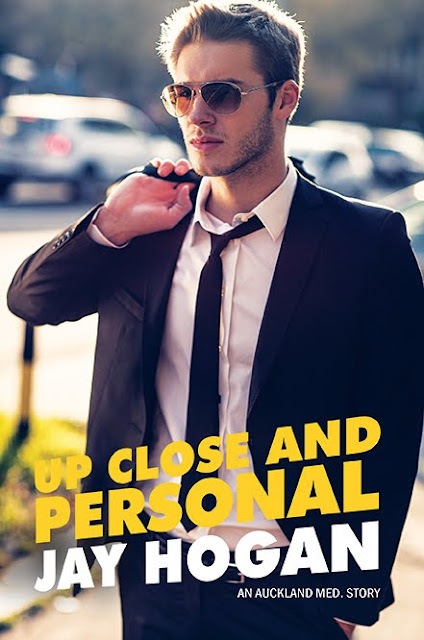 The man is miles out of Mark’s league; completely opposite in almost every way, and shockingly immune to Mark’s flirtations. Mark should just let him go. But the alluring doctor has taken residence in Mark’s brain and is messing with his life’s plan—in particular Mark’s determination to skirt attachments and all the self-absorbed drama that goes with them.

Mark has spent two years watching his friends drop like flies to the white picket virus, only to suddenly find himself hankering for a hammer and some white paint. Edward, however, doesn’t want a bar of Mark’s roguish charm.

But it’s not like Mark can avoid the sexy pathologist—death brings them together on a regular basis. So when a string of murders threatens both their lives and sends them into hiding, something has to give. 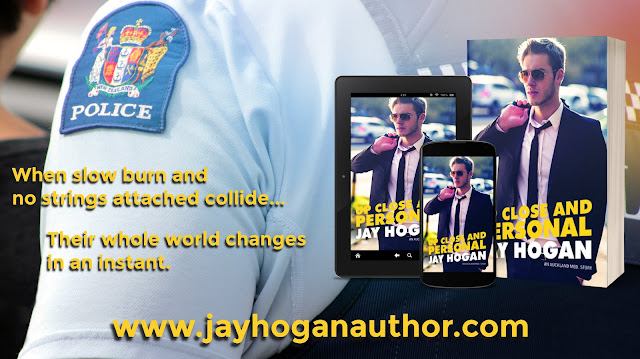 Liam laughed. “So, tell me again why we didn’t come in the brand spanking new entrance?”
Mark ignored him, eyes flat as a lake.
Liam smiled sweetly. “Oh, that’s right. You wanted to grab a coffee for our new pathologist. Don’t remember you ever getting one for Tom Spencer...let me see…” He looked thoughtful. “Nope, never.”
“Tom Spencer was seven-hundred-years-old,” Mark fired back. “Besides, the coffee was for us, the doc was a mere afterthought.”
Liam gave him the side-eye. “Of course he was.”
“And parking’s easier up the top. It’s still raining, in case you hadn’t noticed.”
“Would you like a bigger spade for that hole you’re digging?”
No. Mark was doing just fine with the one he had, thank you very much.
“Have to say I wouldn’t have pegged the man as your style. Just saying.”
They pressed themselves to the wall as a pair of orderlies pushed a steel body box past and Mark took the moment to study his partner. “We’ve been partners what, eight months?”
Liam nodded warily. “Seven months three weeks, to be precise.”
“Right. And I think we’ve talked about my sex life all of…hmm let me see…never in all that time. So, forgive me, but I wouldn’t have thought you’d have any idea, let alone an opinion, on my style, detective. So please, do enlighten me.”
Liam’s neck abruptly reddened. “Well, I haven’t, not really. But I’m not immune to the grapevine gossip either. And if you go through young gay dudes at the rate they say you do¾you call them twinks, right?” Liam’s eyes glittered with mischief. “Well, I just wanted to say that I’m seriously impressed. I honestly don’t know how you find the energy. By the time I get home and get the kids to bed, I can barely lift my toothbrush let alone any parts south of that. But on that note and in answer to your question, I just meant the doc is hardly in the same category as your usual pickings.”
No. No he wasn’t. And that was Mark’s problem in a nutshell. He let Liam chatter away about the sad state of his own married sex life with two kids under three, while Mark pondered the implications of Liam’s belief about Mark’s. It wasn’t like the office chatter about Mark was new, or even inaccurate. That people thought he was a flirt and a lightweight had never bothered him before. So, why then did it all of a sudden sting, just a little bit? It was a question he suspected he knew the answer to if only he was brave enough to stop running long enough to consider it¾which he wasn’t.
“I wouldn’t believe everything you hear,” he interrupted Liam’s inventory of sleep deprivation and its effects on the male refractory rate. “And why the hell are we even having this conversation?”
“Because I’m your partner?” Liam returned Mark’s playful punch.
“Hmmph. You never shown any interest before.”
Liam shrugged. “Maybe I should have. Besides, you know in intimate detail all the highs and lows of my own child rearing disasters, and the effects of new born baby cock-blocking syndrome.”

I am a New Zealand author writing in m/m romance, and romantic suspense. I have traveled extensively and lived in the US, Canada, France, Australia and South Korea. In a past life I have been an Intensive Care Nurse, Counselor, and a Nursing Lecturer.

I'm a cat aficionado especially of Maine Coons, and an avid dog lover (but don’t tell the cat). I love to cook, pretty damn good, love to sing, pretty damn average, and as for loving full-time writing, absolutely… depending of course on the day, the word count, the deadline, how obliging my characters are, the ambient temperature in the Western Sahara, whether Jupiter is rising, the size of the ozone hole over New Zealand and how much coffee I've had.

Welcome to my world.