Nothing Special: Ex Meridian by A.E. Via - Audio Release Blog Tour with Excerpt 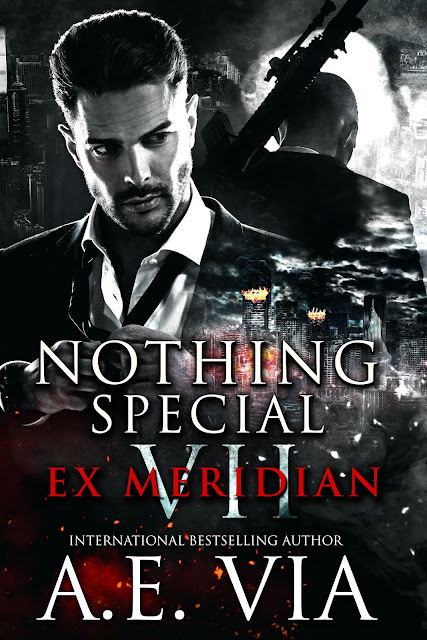 Police Lieutenants, God and Day are under intense pressure from the chief to take back control of Atlanta’s streets. The last thing their task force needs is a pair of trained killers in town with a personal score to settle.

Take a man and strip him of his ability to feel compassion, empathy, remorse, or any of the emotions that make him human, but leave the ones that ignite rage and aggression and you have the perfect killing machine—now imagine two of them.

Code names Ex and Meridian are synonymous for ‘guaranteed death’ to international terrorists. Two broken men from the same crooked streets, recruited into an unsanctioned government program that few know about. Trained to operate most efficiently—lethally—together.

When Ex returns from an op in Bolivia to learn his little brother has been accidentally killed in a feud between drug gangs, he’s stateside before he can consider the rules he’ll be breaking, and of course Meridian is right beside him. There’s mayhem on the streets of Atlanta and the police are losing control. If Godfrey and his elite team of detectives can’t get the job done then they’d be happy to lighten their caseloads for them. And Ex nor Meridian care about doing it quietly.

“I know who you are.” The man grunted when Ex turned to leave. “You’re the fucking devil.”

Meridian walked past, glaring one final time. “Say that loud enough… maybe God will save you.”

But after their first run-in with the big lieutenant and his protective husband, Day, Ex and Meridian start to reevaluate their own relationship. Wondering if they could be even deadlier if they let loose the feelings for each other that they’ve been forced to suppress for years.

Meridian’s dark eyes stayed locked on his, “A man who can fight beside the one he loves doesn’t make him weaker, Ex—it makes him more dangerous.”

No multiple pairings. No cliffhangers. Ends with a HEA. Note: This is a partners-to-lovers, out-for-you, action romance.

Neither of them spoke while they ate. Ex never felt the need to fill their long moments of silence with idle words, and his partner wasn’t a big talker. Besides, Ex could enjoy Meridian by him simply being there. His presence was just that powerful.

“So, what’s next?” Meridian asked after he’d pushed his empty plate to the side.

Ex drank some of his water, the coolness feeling good to his parched throat, but he wished he had something stronger. He reclined in his seat, mimicking Meridian’s posture and trying to appear casual.

“First and foremost, we go to Virginia and get our supplies. My contact there is ready for us, we should be in and out,”Ex explained. “Oay night. Of course, flying would be faster but we can better stay under the radar if we avoid TSA. Amtrak will be easiest to transport our cargo well.”

“Works for me. He knows what we need?”

“Yes. As soon as we get back we can start to have some conversations around town. We’ll backtrack over the task force’s recent arrests and see what we can find. I also wanna keep an eye on that deputy district attorney. Something seems off there to me,” Ex said.

“Agreed.”Meridian put his cigarette into his mouth and finally lit it. He blew the aromatic smoke away from Ex but he still caught the robust scent of cloves.

Ex thought the smoking habit was atrocious, but he found he liked it when Meridian did it. The addiction made him seem less programmed. It was something his partner did when he was battling on the inside, and it was also something he only showed Ex.

Meridian’s eyes were half covered by his long black eye lashes, appearing as if he was enjoying what he was doing. He had one arm braced on the back of the seat and Ex could see the shiny Italian silk lining of Meridian’s jacket and the butt of his chrome Wesson Valor resting against his rib cage.

A.E. Via has been a best-selling author in the beautiful gay romance genre for six years now, but she’s no stranger to MM. She’s been an avid reader of gay literature for over twenty years before she picked up her laptop to place her own kiss on this genre. She’s also the founder and owner of Via Star Wings Books, having published a couple great, new up and coming MM authors.

A.E. has a Bachelor of Arts in Criminal Justice from Virginia Wesleyan College that she used to start her own paralegal firm after she graduated in 2008. She spent five years preparing and filing bankruptcy petitions for struggling blue collar workers who couldn’t afford to file with a lawyer. It was a rewarding and satisfying career… but another path called to her.

A.E.’s novels embodies everything from hopelessly romantic to adventure, to scandalous. Her stories often include intriguing edges and twists that take readers to new, thought-provoking depths.

She’s recently celebrated her 20th book anniversary, and is well-known for her hardcore, love hard, bad boy, alphas. However, she does like to push herself to step out of her comfort zone, exploring different tropes. She’s head over heels for gay romance and she has tons of more hot stories to tell.

Be sure to visit Adrienne on her social media pages and subscribe to her newsletter to never miss another release date! Go to A.E. Via’s official website http://authoraevia.com for more detailed information on how to contact her, follow her, or a sneak peek at upcoming work, free reads, VSWB submissions, and where she’ll appear next.