The Midwest Series by Brigham Vaughn

It was more than a decision, it was serendipity.

A former college hockey stars decision to come out of the closet and reunite with his high school boyfriend does more than change the direction of their lives.

It sets into motion events that will lead to their respective best friends, a former hockey player and a psychology major, being stuck on a summer road trip together.

They cross paths with another old friend, an injured pro baseball player whose been forced to move in with his physical therapist. Old hurts are healed and the six become close friends.

When a night out for the guys leads to their meeting an Olympic hopeful swimmer who is fascinated by a drag queen it’s clear that none of their lives will ever be the same.

They are standalone stories featuring four different couples. Reading in order is helpful but not required.

It's time to leave college and the closet behind.

Nathan Rhodes has put hockey first for most of his life, but as graduation looms, he has a different goal in mind. He needs to come out and reclaim his first love. If only Caleb will believe him...

Theater geek Caleb Stockwell gave up on love when his boyfriend chose the closet over being with an openly bisexual guy. Now, he hides his heartbreak behind a string of casual hookups. He loves the drama on stage, but he’s done with the drama of Nathan Rhodes. For good.

Nathan is determined to right the wrongs of four years ago, but the clock is ticking.

One month until he and Caleb go their separate ways. One month to take a final shot at winning Caleb's heart back.

Win or lose, everything is on the line.

It was just supposed to be a road trip.

Former hockey player Brent Cameron has a plan now that he's out of the closet. He'll take a summer road trip, find a job, and settle down with a fellow jock. Lowell Prescott is not part of that plan, but when Brent’s travel companion bails, he’s the only option.

Out and proud, Lowell has a love of sports, a flair of fashion, and a disdain for anything conventional. Burned by past relationships, he’s wary of jocks who want to change him—and that includes Brent Cameron.

Tempers flare and sparks fly as the miles disappear behind them. Just as it seems they might be on a journey to something more than Lake Superior, Brent receives a phone call that could change everything.

Will Brent stay with Lowell and ignore a friend in need, or go sit by the bedside of the man who broke Lowell's heart?

The stakes are high when you play for keeps. 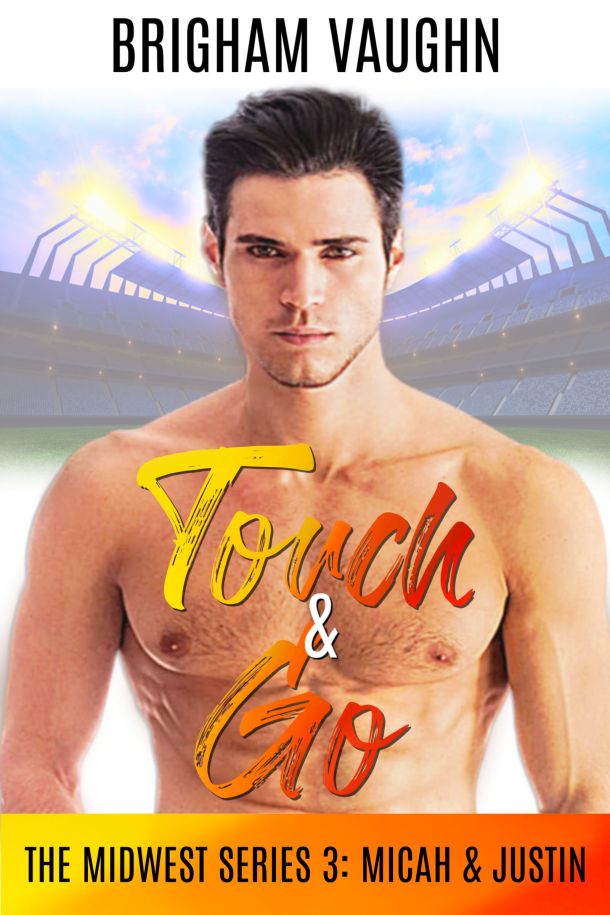 It was supposed to be a secret fling.

Micah Warner spent his whole life dreaming of pitching in the big leagues. Signing with a minor-league team near Chicago puts him one step closer to making that a reality. But there are no out players in pro ball, so any involvement with a man must be discreet.

Physical therapist Justin Lamb loves his job with the Cougars. A romantic at heart, he wants to find lasting love—with a man or woman—but traveling with the team makes it difficult to maintain a long-term relationship.

Micah offers Justin a no-strings-attached way to blow off some steam, and Justin reluctantly agrees. It doesn’t take long before they’re both in over their heads but falling in love will risk everything.

With their careers and relationship hanging in the balance, they have one last play to make.

It’s time to take a swing for real and lasting love.

Olympic-size dreams come at a price.

Openly gay college swimmer Ian Harrington feels like he's fighting against a current of tragedy. He's grieving the loss of his parents and best friend, and now he's dealing with a toxic coach and judgmental brother. But he won't let that stop him from chasing his dream: Olympic gold.

Ricky Chavez has just about everything he wants in life: a great career, a supportive family, and a side gig as drag queen Rosie Riveting. The only thing he's missing is a partner to share it all with.

When the two men connect after Rosie’s performance, they're immediately drawn to one another. But it's never that simple. Ricky isn't the type of man to hide, and with Ian's coach breathing down his neck, he can't openly love a drag queen without making waves.

They'll have to brave deep waters to make it to the finish line.

Nathan’s voice was soft when he spoke, gentle like it’d always been. “Caleb Stockwell. I’ve been looking for you.”

Caleb cleared his throat and ignored him, tipping the bottle up for another long drink. He licked the spiciness from his lips as he debated making another run for it. There was a shrub blocking his way in one direction and a hockey player in the other. Even if he hadn’t been drinking, the odds weren’t in his favor. “Nathan Rhodes,” he managed.

“Damn I can’t believe it’s you!” Nathan leaned in and Caleb pulled back, uncomfortable with him being so close.

Caleb laughed bitterly. “It’s me. Now that you’ve satisfied your curiosity, you can run along.” He motioned with his hand, encouraging Nathan to leave.

“It’s really good to see you,” Nathan said, ignoring him. He took a seat on the pile of discarded construction materials, his knees brushing Caleb’s as he lowered himself down. Caleb pulled away as if scorched.

“Yeah? Too bad I can’t say the same,” he muttered, his head swimming as the alcohol began to hit him. He eyed Nathan’s long, long legs and the way he was pinned in by them, remembering the way they’d felt tangled with his as they came, panting shallowly against each other’s skin. It brought it all back; the scent of Nathan’s cologne, the taste of his skin, the way Caleb’s heart raced in his chest when Nathan held him close. It brought back the memories the ones he’d worked so hard to run from. The good and the bad. The sharp, intense happiness of falling for Nathan. The aching, crushing hurt that paralyzed Caleb for months after Nathan was no longer in his life. Everything he’d buried four years ago and vowed never to touch again.

He caught the first glimpse of doubt on Nathan’s face. “Are you okay, Caleb?”

“Oh, I’m mother fucking peachy,” he snarked and took another long drink. “I’ve made it through four fucking years trying to ignore the fact we’re on the same campus and with barely a month left in my senior year, I thought maybe I’d managed to pull it off. But nooo, Lowell had to drag me to this goddamn party, and of course you showed up too. Just my fucking luck.”

He raised the bottle again, but Nathan wrapped a hand around the neck and tugged. He was stronger than Caleb, so Caleb let go, afraid he’d end up getting pulled into Nathan’s lap if he didn’t. Nathan took a drink and passed the bottle back, licking the taste of rum off his lips before he spoke. “You’re so angry at me.”

“Ya think?” Caleb snarled. “Didn’t it ever occur to you I would be? What the hell makes you think you can waltz in here and pretend like all the shit that went down between us didn’t happen?” He tried to stand, but Nathan’s dark denim-clad knees were on either side of his, pinning him in place. He pried the bottle from Caleb’s suddenly limp fingers and set it aside.

“I don’t think that,” Nathan protested. “I was just glad to see you and I … I wanted a chance to apologize. I didn’t … I wanted …”

Caleb’s lips parted in surprise as cool fingers framed his face and for the first time in four long years, Nathan’s lips were pressed to his again. Involuntarily, Caleb closed his eyes, feeling a rush of heat wash over him, taking him right back to the first time. Before Nathan broke his heart.

Brigham Vaughn is on the adventure of a lifetime as a full-time author. She devours books at an alarming rate and hasn’t let her short arms and long torso stop her from doing yoga. She makes a killer key lime pie, hates green peppers, and loves wine tasting tours. A collector of vintage Nancy Drew books and green glassware, she enjoys poking around in antique shops and refinishing thrift store furniture. An avid photographer, she dreams of traveling the world and she can’t wait to discover everything else life has to offer her.

Her books range from short stories to novellas to novels. They explore gay, bisexual, lesbian, and polyamorous romance in contemporary settings.