Book Title: Matched to His Bear

Even though it’s part of a dating app series, each book can be read as a standalone.

This is the second book in the series. Matched to His Wolf was the first. 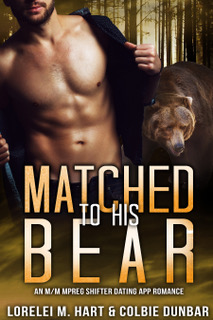 Fate doesn’t use dating apps to pair true mates...except when it does.

Fate doesn't use dating apps to pair true mates...except when it does.

Alpha Brad Galway is a hot successful lawyer and Beta of his Den with omegas throwing themselves at his feet. From the outside, it appears as though he has everything he could possibly desire. Inwardly, he has a bear clawing to get out—no longer willing to stand by and let his mate go unclaimed. But there’s a problem with his bear’s plan. Brad doesn’t know who or where he is, just that they crossed paths in an airport over a year ago. If he doesn’t figure out how to control his bear soon, he risks losing everything—including his life.

Human omega Gabe Rafferty is excited to start his new job as a professor of English Lit. Ever since a layover in an airport last year, he’s felt like his luck has changed. He can’t explain how or why...but something happened that day, and everything from that point was onward and upward. He just wishes he had someone to share it with.

When Gabe is talked into using a dating app, he isn’t expecting much until he stumbles onto profiles that are fixated on the TV series, Shifter World. And he definitely isn’t anticipating the smoldering alpha who recaptures that feeling he experienced at the airport. Sparks fly, feelings grow, and their worlds are turned upside down in the very best of ways, but is it too late for Brad’s bear?

Matched to His Bear is the second book in the sweet with knotty heat Dates of Our Lives, an M/M mpreg shifter dating app romance brought to you by the popular co-writing duo of Lorelei M Hart and Colbie Dunbar. It features a human who stumbles into a world he never knew existed thanks to a silly little soap opera, an alpha who is losing his humanity, a stalker bear who turns out to be more trouble than anyone could’ve suspected, and an adorable baby. If you like your shifters hawt, your omegas strong, your mpreg with heart, and your HEAs complete with true mates and a bundle of joy, one-click today

The kitchen island was covered in bowls, pans, and other stuff. “Has the food delivery guy been and gone?”

“Nope. We’re cooking breakfast.” He glanced at his watch. “More like brunch.”

“You cook?” I asked, holding up a bunch of green things and studying it.

“And about the whole ‘we’ cooking thing…” My voice trailed away as Brad handed me a wooden board, a knife, and an onion. “What do I do with this?”

He grinned and kissed the end of my nose. “Can you chop it, please, Gabe?”

“Okay.” I was game for anything. I placed the onion on the board, and with both hands on the knife, brought it down over my head, and missed. Though I got the board, the knife sticking out of it reminded me of the aftermath of a pirate battle in a swashbuckling book.

Brad stood behind me and murmured, “Here lies our dearly departed knife…”

“Almost. Let’s try again.” He placed his hands on mine, but I wriggled my ass against his crotch. A sharp intake of breath from him had me giggling. He pressed himself against my body and placed his lips on my ear. Food first, and then I’m taking you back to bed.”

“First we have to peel the onion, and then we chop it.” But by the time he cut into it, I was blinking tears from my eyes. “Owww! It hates me.” Brad took over and I sat on a stool. “You watching, Gabe?”

“Mmmm. Yes. Taking it all in,” I said as I leaned sideways and peered at his ass. That wasn’t a fib. I was paying attention, just not to what he was doing.

“Liar.” He held up an oddly shaped red lump. “Know what this is?”

“Something you’re going to cook?” I was quite proud of my answer.

“I thought pepper was something that came out of a grinder.”

Brad slapped a hand on his brow. “How is it you’ve managed to survive in the world up until now? And have no idea what you’re putting in your mouth.” And as he said it, his mouth formed the perfect O.

He understood the hole he’d fallen into, and I was going to tease him about it. I tilted my head to the side. “I always know what I’m eating, but I’m not talking about food.” I grabbed a dish cloth and swatted his ass.

He leveled a glowering look in my direction. “Keep distracting me and we’ll never get brunch.”

“Promise?” But my belly grumbled and I bowed, awarding the first round to him.

He made quick work of cutting the pepper, threw oil in a pan, and asked me to stir the red pepper and onions while he assembled herbs and spices, which were all shades of red or brown. I peered at the mixture as I stirred, not sure what it was supposed to be.

“You can leave it for now. We’ll keep an eye on it,” he told me as he turned down the heat and opened a tin of tomatoes.

“Time for extracurricular activities, I asked?”

I swooped under his arms and bobbed up, kissing him on the mouth. “You are a delightful distraction,” he croaked as my tongue flicked over his teeth. “But let’s finish cooking and then you’ll be my prisoner, unable to leave the bed for the rest of the day.”

I clapped my hands. “Are you going to tie me up?

“I wasn't planning on it, but if you behave…”

Lorelei M. Hart is the cowriting team of USA Today Bestselling Authors Kate Richards and Ever Coming now joined by their friend, Ophelia Heart. Friends for years, the three decided to come together and write one of their favorite guilty pleasures: Mpreg. There is something that just does it for them about smexy men who love each other enough to start a family together in a world where they can do it the old-fashioned way ;).

My characters are sexy, hot, adorable—and often filthy—alphas and omegas. Feudal lords with dark secrets, lonely omegas running away from their past, and alphas who refuse to commit.

Lurking in the background are kings, mafia dons, undercover agents and highwaymen with a naughty gleam in their eye.

As for me? I dictate my steamy stories with a glass of champagne in one hand. Because why not?