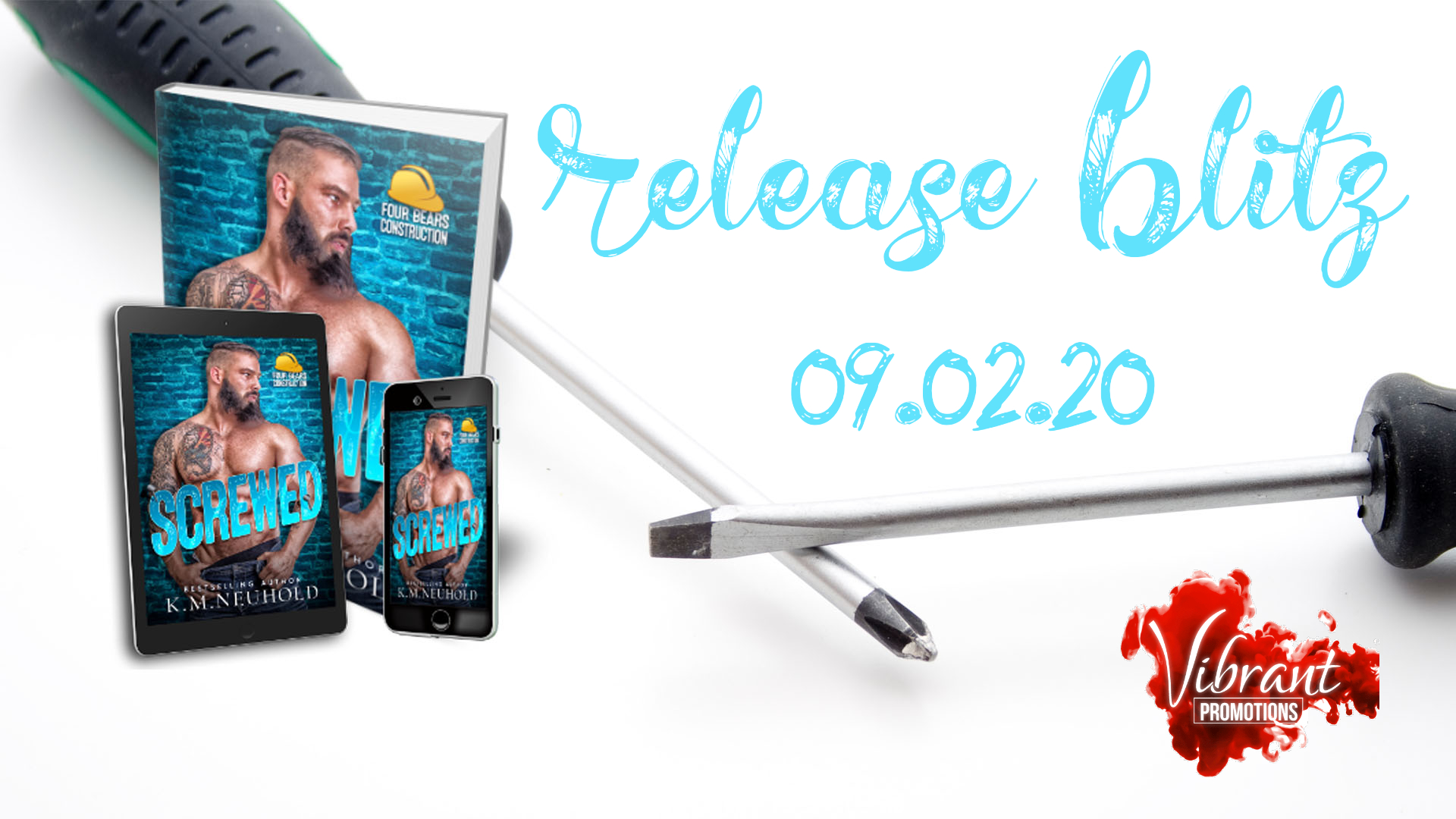 I’ve had my fair share of less than proud relationship moments, but waking up married to my brother-in-law’s best friend is a new low.

A drunken wedding to a man who already rejected me once? Check. A hefty bet about how long it will last? Check. My feisty new husband, determined to make our friends pay up? Double check.

I’ve never managed to make a real relationship last nearly a year, there’s no way Daniel will stick around long enough to win this bet. The only problem is the longer he stays, the more the lines blur between what’s real and what’s for show. Does he feel it too, or am I totally screwed?

*Screwed is a woke up married, faking it to their friends but also totally hooking up, sweet, STEAMY love story that happens to be the fourth book in the Four Bears Construction series. There are no bear shifters in this series, only the OTHER kind of bears. 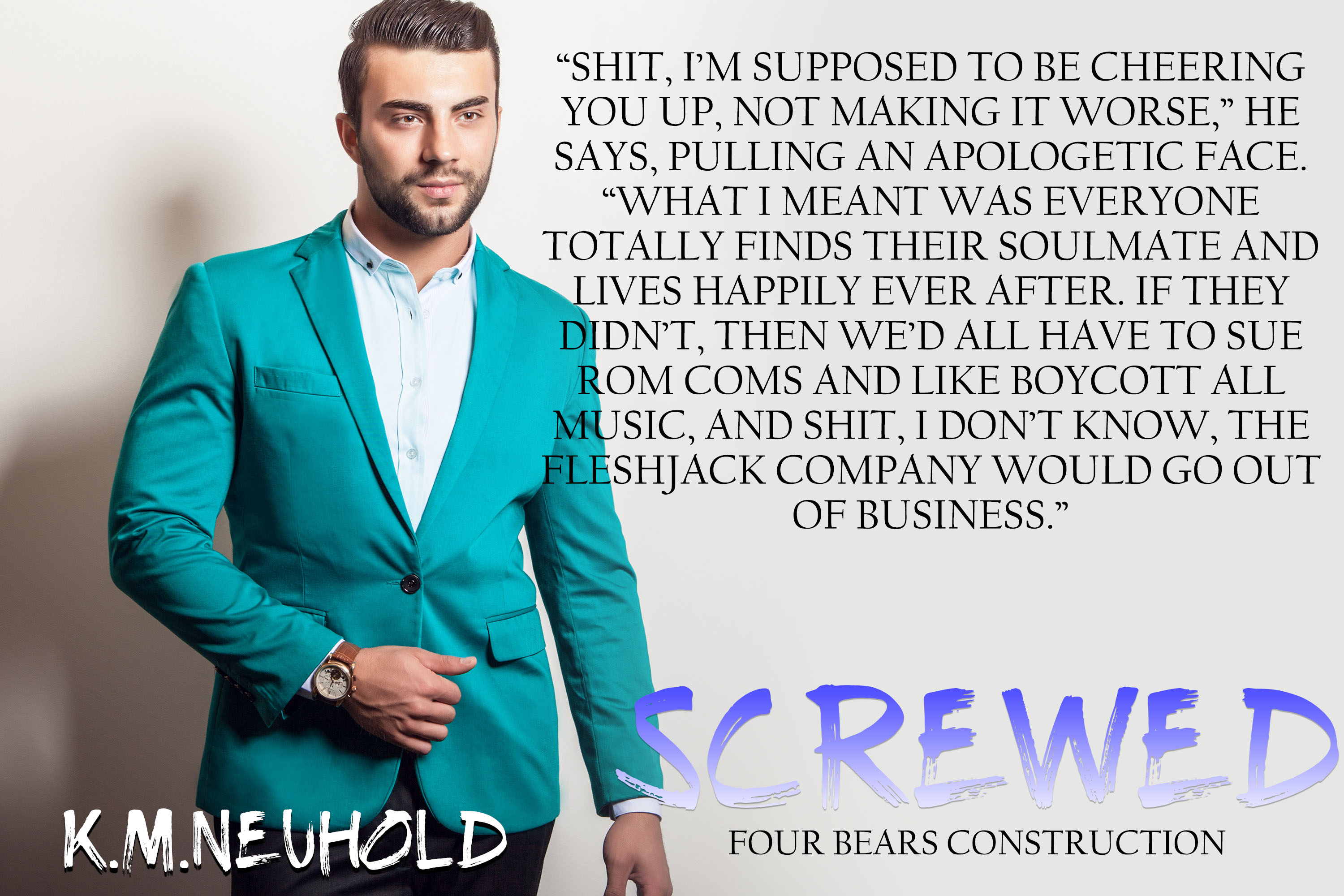 “You know what will make you feel better than booze? Dancing.” He doesn’t even wait for my response before grabbing my arm and hauling me out of my seat. I stumble a little, the four shots I took in quick succession going straight to my head.
Daniel slips his hand into mine without hesitation. His skin is warm and his palm is soft and smooth in contrast to my own. He’s slight, but his grip is strong, and he seems to have a special talent for making people get the hell out of his way, never slowing his steps as he parts the crowd and leads me to the makeshift dance floor.
He turns to face me as soon as we find an open space. In an instant, I watch as the prim, proper man I thought he was slips away, replaced by a man who’s smiling like a mad man and dancing like he’s trying to earn next month’s rent, swinging his hips from side to side and shaking his ass. It’s enough to lift the heaviness from my chest, a smile breaking over my face as I join him in swaying to the beat of the fast paced song.
“There’s a smile,” he says, reaching over and running his fingers through my thick beard with too much familiarity and not enough all at once. Why did I decide Daniel wasn’t my type again? Because right now I’m pretty sure he’s checking every box I can think of. “Don’t worry about that douche, okay? You were too good for him anyway.”
I chuckle. “You hardly know me. Maybe I’m a douche too,” I challenge.
“I know enough,” he shouts over the music, spinning around so his ass is toward me and swiveling his hips invitingly. He turns his head, looking at me over his shoulder, and winks.
His ass looks tight and firm, perfect to dig my fingers into, to spread his cheeks apart and bury my face between them. My cock perks up, pressing against the zipper of my jeans.
The song changes to one with a slower tempo, and Daniel turns back to face me again, stepping closer and looping his arms around my neck without hesitation, pressing his body against mine. I roll with it, wrapping my arms around his middle and swaying to the song with him.
“So, what’s the deal? Do you have shitty taste or bad luck?” he asks conversationally.
“Both?” It wasn’t intended to sound like a question, but fuck if I know. Maybe I’m cursed. Or maybe a happy ending was never in the cards for me to begin with.
Daniel bobs his head in understanding. “Relationships are bullshit.”
“You don’t mean that,” I argue, tilting my head back at Ren and Cole. “Look how happy they are. That’s not bullshit.”
“They’re freaks,” he says with a laugh. “The way I see it, it’s like winning the lottery. Do some people win? Of course. But it’s only enough people to keep the rest of us scratching duds the rest of our lives.”
“That’s goddamn depressing,” I sigh.
“Shit, I’m supposed to be cheering you up, not making it worse,” he says, pulling an apologetic face. “What I meant was everyone totally finds their soulmate and lives happily ever after. If they didn’t, then we’d all have to sue rom coms and like boycott all music, and hell, I don’t know, the Fleshjack company would go out of business.”


“I’m not sure that any of that checks out, but thanks for trying.”

Author K.M.Neuhold is a complete romance junkie, a total sap in every way. She started her journey as an author in new adult, MF romance, but after a chance reading of an MM book she was completely hooked on everything about lovely- and sometimes damaged- men finding their Happily Ever After together. She has a strong passion for writing characters with a lot of heart and soul, and a bit of humor as well. And she fully admits that her OCD tendencies of making sure every side character has a full backstory will likely always lead to every book having a spin-off or series. When she's not writing she's a lion tamer, an astronaut, and a superhero...just kidding, she's likely watching Netflix and snuggling with her husky while her amazing husband brings her coffee.
linktr.ee/KMNeuhold