Can trust once broken be rebuilt?

When workaholic Lawrence Weller walks in on the aftermath of his fiancé Frankie cheating on him, his world shatters. Frankie’s the love of his life, the only person he’s ever trusted, and the betrayal leaves him devastated.

Franklin Ennis makes a huge mistake he regrets deeply before it’s even over. He pleads for a second chance, willing to do whatever it takes to save their relationship.

A love that deep doesn’t just stop, so Lawrence agrees to try. But mistakes don’t happen in a vacuum. Are they both willing to own up to their part? Will their love be enough to repair what was crushed? Can trust once broken be rebuilt?

You never told me you were lonely,” I say.

“I did!” His protest is loud and takes some of the defeat from his body. “I’ve told you a thousand times. How I miss you when you’re always working late and wish we could do more stuff together.”

I knit my eyebrows together, trying to think back and remember. He’s right. He always hugs me tightly and tells me how much he’ll miss me when he knows I’ll work late. Or how he wishes we could do something together, even if it’s only watching a show while cuddling on the couch.

”I thought that was your way of showing me how you feel about me. You being sweet and caring. Not once did I think it meant ‘I’m so fucking lonely I’ll suck someone else’s dick.’ Was it even your first time?” The question is a pained scream, hurting my throat, my head, my soul. I don’t like yelling, so I take a deep breath and start counting to ten in my head to calm down, but I’m interrupted before even reaching three.

His words are a thundercrack in an otherwise dead silent apartment, and I rear back, scramble off the couch, and turn to leave.

“No. Please.” He’s pleading now, voice cracked and bleeding out on the floor. “Please don’t leave me, Lawrence. I’ll do anything. I love you so much, don’t leave me.”

I’m frozen on the spot. Undecided. The hurt, overly-dramatic part of me wants to storm off in a huff, throw some stuff in a bag, and retreat somewhere to lick my wounds, and rage and scream and curse the treachery, while wailing out my broken heart. But the other, more rational part of me won’t let me move, the part that still remembers how much I love him, still remembers his loving kisses, his devotion. His passion.

So I sink back down on the couch. Rub my palms over my face and swallow. “I don’t know what to do here, Frankie. I’m hurt and betrayed, but at the same time I just can’t turn off my feelings for you. But how can I be with you if I can’t trust you?”

“You can trust me. You can.” He’s so sincere, so heartfelt, leaning forward -- hands twitching so he shoves them between his knees -- begging, willing me to believe him. And I want to. I really do.

“I’ve never done anything like this before, never kissed anyone, hardly ever looked at anyone like that. It was a huge mistake and I regret it. So, so much. I know I can’t prove it, but I was going to tell you. That’s what I was worried about when you walked in. How I would tell you. How you’d react. If you’d hate me.”

I must look skeptical because he hurries to continue. “I know. It’s easy to say when there’s no way of proving intent. But I’m not a liar. You know I’m not.”

“Do I?” I push out the question around the lump in my throat.

He slides to his knees on the floor in front of me, sits back on his heels, and tries to catch my gaze. I give in to his silent pleas and meet his eyes.

“You know me, Lawrence. You know you do. You know what kind of person I am. I’m only human and make mistakes like everyone. This one was huge and more stupid than most, I know that. I’m not perfect, but I’m not a liar. I’m not disloyal. And I own my mistakes.” His face is open. He blinks away tears, but his gaze never falters. His hands rest on his knees, palms open and turned up, and everything about him invites me to see the honesty in his heart.

And maybe I can see it. The slight tremble of his hand and the pulse fluttering visibly in his neck betrays his anxiousness, but he doesn’t move. Doesn’t squirm or fidget, doesn’t look away from me. Nothing indicates that he’s lying.

There’s no way he’s that skilled a liar. He’s always been open and honest and prone to blurting his emotions as soon as he experiences them. That thought deflates me and I fall back against the couch.

His eyes well up and a tremble racks his body, but it’s the sight of his wobbly chin that finally cracks me. I hold out my hand, unable to not touch him anymore. “Come here.”

About the Author
Nell Iris is a romantic at heart who believes everyone deserves a happy ending. She’s a bona fide bookworm (learned to read long before she started school), wouldn’t dream of going anywhere without something to read (not even the ladies room), loves music (and singing along at the top of her voice but she’s no Celine Dion), and is a real Star Trek nerd (Make it so). She loves words, bullet journals, poetry, wine, coffee-flavored kisses, and fika (a Swedish cultural thing involving coffee and pastry!)
Nell believes passionately in equality for all regardless of race, gender or sexuality, and wants to make the world a better, less hateful, place.
Nell is a bisexual Swedish woman married to the love of her life, a proud mama of a grown daughter, and is approaching 50 faster than she’d like. She lives in the south of Sweden where she spends her days thinking up stories about people falling in love. After dreaming about being a writer for most of her life, she finally was in a place where she could pursue her dream and released her first book in 2017.
Nell Iris writes gay romance, prefers sweet over angsty, short over long, and quirky characters over alpha males.
Author Links
Blog/Website | Facebook Author Page | Facebook Profile
Twitter: @nellirisauthor | Instagram: @nell_iris | Goodreads
QueeRomance Ink | BookBub

your choice of ebook from my backlist (5 winners) 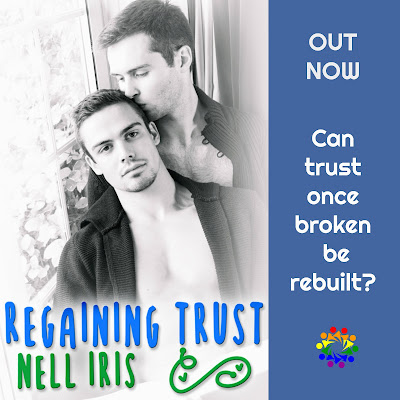