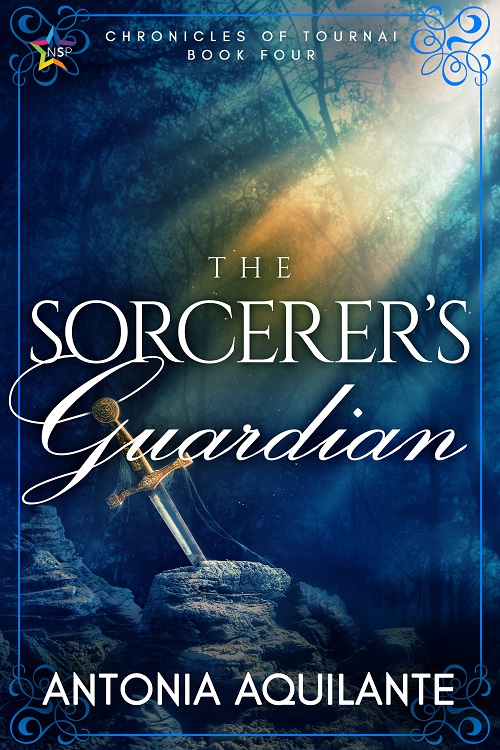 Savarin honed his Talent through years of study, and to achieve his goal of becoming the most powerful and accomplished sorcerer in Tournai, he made magic his life. Among the wealthy and noble circles he moves in, no one would suspect the handsome, refined, arrogant sorcerer’s humble beginnings—which is how Savarin prefers it. He wants to be seen only as the man he’s made himself. When Tournai’s princes task Savarin with studying and strengthening the spells that protect the principality from magical attack, he is more than happy to do so. The spells are complex, centuries old, and exactly the type of puzzle Savarin is eager to solve. But to his annoyance, the princes insist Loriot accompany him on his journey.

Second son of a minor noble family, Loriot worked his way up the ranks of the royal guard to captain with single-minded determination and takes pride in his service to the crown. He must obey the prince’s orders to protect Savarin, despite believing his skills would be best used elsewhere and his wariness of magic. UnTalented himself, Loriot has learned not only the benefits of magic but also its potential for harm—and how to counter it. He still believes it’s best to avoid most magic entirely, which is difficult when he’s tasked with playing guard to a powerful sorcerer.

Loriot and Savarin clash repeatedly during their journey, but the simmering tension between them doesn’t only stem from their work, and passion develops into feelings neither expected. But Savarin must still secure Tournai’s magical barrier, and his only solution will endanger both him and the royal family.

As afternoon waned into evening, Loriot approached his house on Dove Lane. Weariness dragged at him with each step. He hadn’t slept more than a few minutes in the last few days, and now that the crisis had passed, he felt the fatigue down to his bones. But the lack of sleep was worth it for the good outcome of the situation.

He trudged up the few steps to his front door, its rich blue color recently freshened, and let himself in. The key turned smoothly in the lock, and the magical protections on the house recognized him as belonging, allowing him inside. He shivered, even though he didn’t feel anything as he crossed the threshold; perhaps someone with a Talent would, but he had neither Talent nor any sensitivity to magic.

Inside, the house was quiet. The formal parlor was empty, which was unsurprising as they rarely used it—only when Joceline and Oriana chose to entertain. He wanted more than anything to go up to his bedchamber and collapse into his bed for the next few days, but he couldn’t. Couldn’t even collapse for a few hours without checking on his family. But he knew where at least one of them was likely to be at this time of day.

The sitting room at the back of the house was quiet, too, so quiet he could hear the scratch of his sister’s pen on paper as he stepped into the doorway. Joceline sat at her writing desk, papers spread around her, pen flying across the page. Despite the silence, she didn’t notice him. A good writing day, then. He hated to disturb her, but she’d want to know he was home.

“Story going well?” he asked, keeping his voice quiet so he wouldn’t startle her. He’d learned it was better to have to repeat himself than to scare her when she was absorbed in a world of her own creation.

But he didn’t have to repeat himself today. She glanced up immediately, her gaze hazy and then sharpening. “There you are! I was wondering if you were ever coming home.”

He hadn’t been gone so long—only a couple of days—but he did try not to let a day go by without returning for at least a little while. He stepped farther into the room and sank down into a comfortable chair. “It was unavoidable. You got my notes?”

“Of course. You know I was just teasing.” Joceline narrowed her eyes and studied him with an intensity he could almost feel. “Is everything all right? You look exhausted, and I heard yesterday the guard was searching everyone leaving the city.”

He scrubbed a hand over his face. Sitting had been a mistake. His eyelids wanted to droop; his body wanted to melt into the cushions. “There was a kidnapping.”

“No, no. And it’s fine now,” he reassured her, trying to keep her from coming out of her chair in her alarm at a threat to the heir to Tournai’s throne. “It wasn’t a member of the royal family at all.”

“But you were involved?”

As captain of the royal guard, Loriot normally wouldn’t be directly involved in such a situation. “The baby taken was the daughter of Prince Amory’s friend, Master Tristan. The merchant. Though if what I saw means anything, he’ll likely be a member of the royal family soon.”

“Really?” Joceline leaned forward, her interest of a different kind now. “There’s going to be a marriage? To whom? The princess?”

He shook his head. He didn’t need to tell her what he said should go no further. He didn’t ever tell her anything truly secret, but Loriot didn’t see the harm in a little meaningless court gossip now and then, especially since she wouldn’t spread it. “No. Lord Etan.”

She sat back with a huff. “Well, they really are bucking tradition, aren’t they?”

He let out a short laugh. But what she said wasn’t untrue. Both Tournai’s prince and his cousin, a royal duke, had married men in the last couple of years, and now it seemed Lord Etan, another cousin of Prince Philip’s, would do the same. Loriot couldn’t think of a time when such a thing had happened, as the royal family and nobility tended to marry those who could provide bloodline heirs for their titles—and some families were even more conservative, only marrying women.

“Good for them,” Joceline said. “I hope they’re happy.”

“Now that Tristan’s daughter is back with them, I believe they are.”

Concern flooded back into her pretty face. “You found her? And the person who took her?”

“Yes, with Master Savarin’s help.” He’d gotten over any resentment he might have had that he needed the help of magic long before today and was happy to use any tool he had access to. Savarin, the most powerful sorcerer in Tournai, was not someone whose help should be turned away, and Savarin never withheld it, serving Tournai whenever he was called upon.

“The sorcerer? How did he help?” Joceline sat forward, a gleam in her eyes he recognized well. She wasn’t simply curious; she wanted to know because she might use the information in a story.

He sighed and shook his head. “He used his magic to try to track the kidnappers and then to try to find the baby directly. He pointed us in the right direction, let us know where to search for them.” Loriot didn’t bother mentioning the help they’d received from someone else, a scholar at the university. If he read Savarin right, Savarin would be finding Master Corentin at the university soon and asking him about the magic he used, because it also sounded as if Savarin hadn’t heard of anything like it.

“Let me guess, your new story has a sorcerer character.” He arched an eyebrow at her, his mildly disapproving tone mostly put on. Which she would know, as she was aware how proud he was of her accomplishments.

“I have an idea that would call for one. What’s Master Savarin like?”

“I don’t know him very well.” He tried to think of anything he knew about Savarin beyond the surface. “He’s powerful and arrogant with it.”

She shrugged. “I’d be surprised if he wasn’t. Aren’t all powerful sorcerers arrogant about their power?”

“I wouldn’t know. I don’t know any others.” He resolutely pushed his newly acquired knowledge of the royal family’s secret Talent from his mind. He didn’t need Joceline seeing a hint in his expression and trying to badger the information out of him. He would never tell, but life would be easier if he didn’t have to fight Joceline about it.

“All the ones I’ve read about in stories are. Especially the evil ones.”

“Tell me you’re not going to base a character on Master Savarin and make him evil.” Making the most powerful sorcerer in the country an evil character in a book sounded like a horrible idea.

Another shrug. “Powerful sorcerers always seem to be evil characters. Or self-sacrificing ones who save the day.”

Loriot shook his head and heaved himself to his feet. If he didn’t move, he’d end up sleeping right there. “Alain is upstairs?”

“Yes. But wait,” she called after him as he walked toward the door. “You must know something else about Master Savarin.”

Savarin’s image filled his mind—his height and broad shoulders, perfectly carved features, blond hair he thought would be soft under his hands. His stride hitched, but he shook the image away and ignored Joceline calling after him. Perhaps she would forget the idea entirely if he didn’t encourage her.

He doubted it, but he could hope. The idea of Savarin as a character in a book on the shelf of a bookshop made him cringe.

Trudging up the stairs took the last of his energy, but he forced himself to bypass his own bedchamber. He couldn’t go to bed without seeing Alain. Not after so long away, not even if it hadn’t been very long. The door to the room at the back of the house was partially open. He peeked in as he pushed it open the rest of the way. The room was tidy, except for a veritable city built of blocks in the middle of the rug. The nursemaid noticed him first, but Alain wasn’t far behind. He looked up, his bright-green eyes—twins of Loriot’s own—lighting up, and something inside Loriot melted, just as it always did under those eyes.

With ease of long practice, he caught the five-year-old bundle of energy that came flying at him and swung his son up into his arms. He cuddled him close for as long as Alain would allow. As tired as he was, he wouldn’t want to be anywhere else. “There’s my boy. I missed you. Show me what you’ve been doing.” 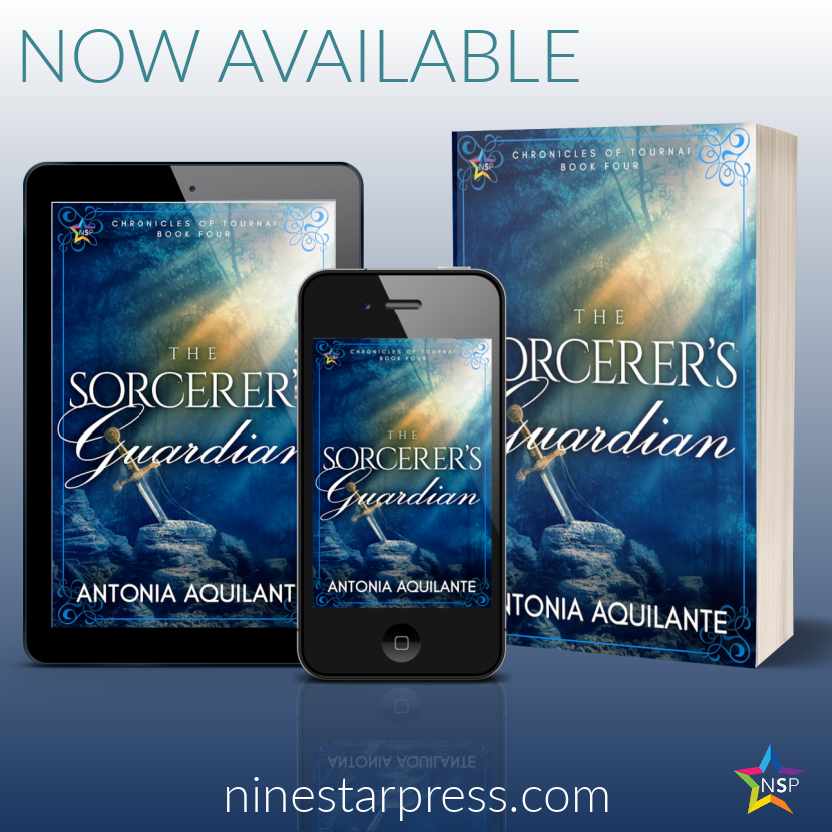 Antonia Aquilante has been making up stories for as long as she can remember, and at the age of twelve, decided she would be a writer when she grew up. After many years and a few career detours, she has returned to that original plan. Her stories have changed over the years, but one thing has remained consistent—they all end in happily ever after.

She has a fondness for travel (and a long list of places she wants to visit and revisit), taking photos, family history, fabulous shoes, baking treats (which she shares with friends and family), and of course, reading. She usually has at least two books started at once and never goes anywhere without her Kindle. Though she is a convert to e-books, she still loves paper books the best, and there are a couple thousand of them residing in her home with her.

Born and raised in New Jersey, Antonia is living there again after years in Washington, DC and North Carolina for school and work. She enjoys being back in the Garden State but admits to being tempted every so often to run away from home and live in Italy.