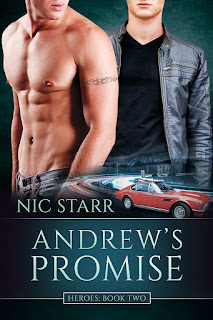 Blurb: Young mechanic Andrew Campbell’s life couldn’t be better. He is about to restore a Ford Mustang with his dad before heading off on the ultimate cross-country road trip with his best friend, Tanner McKenzie.

But tragedy strikes, and Andrew’s life is shattered.  Worried his family will be torn apart if he doesn’t step in, Andrew makes a tough choice between following his heart and doing what he needs to do to protect his little brother.

When Andrew pushes Tanner away, Tanner heads off on the planned trip alone. Once Tanner leaves town, his life takes a different path and it’s ten years before he returns. Now a firefighter, he’s never forgotten his first love, and no one has ever taken Andrew’s place in his heart. He’s determined to see if Andrew feels the same way. He just hopes Andrew’s excited to see him, hopes that he’s available—and finally out—after all this time.

They might not have been ready to deal with emerging feelings years ago, but now might be the time for their second chance at love.

THE SWEET pungency of garlic wafting through the air combined with the aroma of hot and spicy pepperoni with mushrooms—heaven. Andrew tried to watch his diet, conscious of his carbs and fat intake, but a weekly pizza was his one weakness. Meeting Tanner at the Pizza Place gave him an excuse to indulge while catching up with his best friend.

“Are you going to eat that?” Tanner indicated the remaining slice on the plate in the middle of the table. “Because if you don’t take it in the next ten seconds, it’s mine.”

“Hey, hands off,” Andrew said as he snatched the piece of pizza and placed it on the empty plate in front of him.

Tanner held his hands up, palms facing Andrew, in mock surrender. “All right. It’s all yours. I wouldn’t want to come between you and your pizza.” Andrew warmed at the familiarity of the words. They’d been coming here on Thursday nights for years and the routine never changed. Tanner always gave Andrew more than his fair share of the pizza, and Andrew took it, but not without a bit of lighthearted banter.

“You know, you could do with a bit of fattening up,” Andrew said, taking in his friend’s lean frame.

Tanner just raised his eyebrows and kept on eating. It was another routine with them—Andrew’s friendly teasing about Tanner’s looks—but in reality, Tanner’s frame had started to fill out over the last year, something Andrew had begun to notice. He’d also noticed other people looking and assumed Tanner wouldn’t have any trouble attracting a guy, if that’s what he was looking for. Although Andrew knew Tanner’s preferences, he was relieved Tanner didn’t share any other details.
Andrew gave Tanner a once-over as he filled his mouth and chewed thoughtfully. At six feet, Tanner had the body of a swimmer, tall and lean with sleek muscles. Andrew thought he moved like a swimmer too. He was smooth and graceful, and purposeful in his movements. Even now, as he brought the pizza to his mouth, he did so with slender hands and delicate fingers—fingers Andrew found himself staring at while Tanner sucked the grease from them. Tanner pulled the last digit from his mouth with a soft popping sound and smacked his lips. “Yum.” He looked at Andrew. “What?”

Andrew tore his gaze away from Tanner’s shining lips, cleared his throat, and turned the conversation to the trip they’d been discussing before the meal arrived.

“Dad brought home some more brochures last night. I think he’s more excited about the trip than we are.”

“Nah. Not possible.” Tanner grinned. “I can hardly wait. Beginning of summer and we’re outta here, man. Six months. I’m counting the days. Six months till freedom. Bring it on.”

Tanner’s enthusiasm was as infectious as always, and Andrew couldn’t help but smile at him. The background music in the restaurant switched over from a slow track to some Italian mambo track, the upbeat tempo matching his mood. Andrew stacked the plates on the table and moved them to the side, making room for the folder he placed in front of Tanner. He then took the map tucked into the back cover, unfolded it, and spread it across the red-and-white tablecloth.

“Dad got another brochure on the Grand Canyon, but we’ve already covered that.” He used his finger to point to Arizona. It was going to be the destination for an overnight hike that would test their skills. They were used to hiking around Halls Ridge but not to the extremes of temperature and lack of water in the canyon. “We haven’t really spoken about Florida yet.” As he spoke, Andrew took a glossy foldout from his pocket and flattened it to the table. “See here—”

“Hold up, Drew.” Tanner reached across and stilled Andrew’s hand as it hovered over the map. “I have a wild idea. Radical, yes? But how ’bout we don’t plan everything to the nth degree and just play it by ear.”

Tanner’s hand was surprisingly soft where he held Andrew’s hand. Andrew expected roughened skin from Tanner’s work as a mechanic. He blushed as he became aware of Tanner waiting for him. “Huh?”

“You know. Just arrive and go with the flow. Stop when something’s interesting, and move on when it’s not.”

Andrew dragged his thoughts back to the conversation as Tanner released his hand. “But how will we know how long we should plan for? Or what we need to take? What if we’d be best to book something in advance or we miss it? I’d hate to get all the way home and realize we should have stopped somewhere.”

“Don’t you ever want to take a chance? Throw caution to the wind?” Tanner tilted his head and looked at him, but Andrew knew he’d never feel relaxed or comfortable without some sort of road map and plan.

Tanner laughed. “It’s okay, Drew, we can have a plan. I’m lucky I’ve got you to do all the preparation and make sure this trip is everything we want it to be. But maybe, just maybe, I’m not saying you have to, but just think about relaxing a bit? We don’t have a deadline and can take as long as we like to see the country.”

“We can. Take as long as we like, that is. But the money’s going to run out sometime. I know we’ve both put away a bit, but it’ll only go so far.”

“And then we’ll be on even more of an adventure.” Tanner’s eyes gleamed as he winked at Andrew. “Just imagine, we can camp by the roadside and get laboring jobs. We can pick fruit, sow grain, shovel horseshit.” He threw his head back in laughter, his full belly laugh giving Andrew no option but to join in.

“Idiot,” Andrew said as he tossed a sugar packet from the container on the table at Tanner.

Although he knew Tanner was only joking, the idea of being stranded in the unknown without any money gave Andrew the chills.

Tanner eventually stopped laughing and sat back upright in his seat before taking a long swallow of his Coke and pulling the Florida brochure toward him.

“Okay. Show me where you suggest we visit. I assume we need to decide so Josh can put it in the book?”

Andrew nodded. “Yeah. I said he could do it on the weekend, once we’d discussed it.”

“Cool. He’s a great kid. I love what he’s done with the book already.”

Andrew watched Tanner flip through a few pages that were a mix of neat handwritten notes and immaculate cutouts from the various brochures—places to visit, things to see, costs, durations for each destination, what to pack, and all manner of other information. Information Andrew had painstakingly researched and written into the book, but Tanner didn’t need to know that. He didn’t need to know the countless hours Andrew spent on that notebook, on their dream. Andrew had taken note of every place Tanner had mentioned when they discussed the trip and made sure he’d included activities he knew Tanner would enjoy. The notebook had become a labor of love.

And soon the already full itinerary expanded yet again as they discussed alligators, beaches, theme parks, and fishing.

It’s written in the stars

Hi. Nic Starr here. I’m visiting today to celebrate the release of my new novel, Andrew’s Promise and to talk a little about the story.

Andrew’s Promise started with the simple goal of giving Andrew his happy ending. Andrew was introduced to readers in the first book of the series, Charlie’s Hero. In this book, he is a responsible man, who doesn’t seem to have much of a life of his own. In fact he comes across as quite overbearing and a bit boring. He’s focused on protecting his little brother, Josh, but it’s Andrew who causes conflict between Josh and Charlie, with Josh being fearful his coming out will damage the relationship with his brother and destroy the only family he has.

You see, tragedy sent Andrew’s life on a path he hadn’t anticipated. This one event caused Andrew to give up his dreams. This event forced him to turn his back on young love. It was unfortunate circumstance that drove Andrew and his best friend, Tanner, apart, leading them both to ten years of regret. Plus Andrew’s response to the tragedy, the decisions he made, impacted his relationship with his brother, and influenced Josh’s life too.

Cause and effect. Action and reaction.

If Andrew had made different decisions, perhaps things would have been different for them all. Maybe Andrew and Tanner wouldn’t have missed out on those ten years together. But perhaps it was destiny that drove them apart. Maybe if they’d stayed together back when they were younger, things wouldn’t have been fated to work out. But now the time is right and Tanner and Andrew can have their happy ending. I hope you enjoy their story. 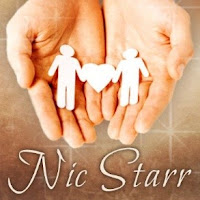 Nic Starr lives in Australia where she tries to squeeze as much into her busy life as possible. Balancing the demands of a corporate career with raising a family and writing can be challenging but she wouldn't give it up for the world.

Always a reader, the lure of m/m romance was strong and she devoured hundreds of wonderful m/m romance books before eventually realising she had some stories of her own that needed to be told!

When not writing or reading, she loves to spend time with her family-an understanding husband and two beautiful daughters-and is often found indulging in her love of cooking and planning her dream home in the country.