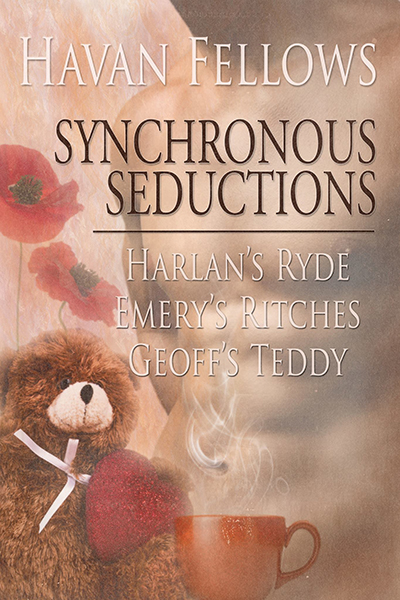 Seven years ago one of them made a mistake.
That mistake will change six lives forever.
Today.

Ryder made a mistake Harlan can't forgive. Will Ryder cross a line no man should cross to obtain a second chance?

Ritchie won't admit he's heartbroken. Emery won't accept less than all of Ritchie's affection. How will arrogant Emery win snarky Ritchie for his own?

Fuzzy is an unsatisfied ladies' man. Geoff's a bear-loving man who satisfies. Problem? Convincing a straight man that satisfaction might be just around the bend.

Warning: This book is chocked full of domineering men who don’t like to take no for an answer. If arrogant alpha men make your heart beat faster and other places tingle, this is the book for you.


“You sorry son of a bi—”
The doorbell rang and cut off the probable start of an argument. On Harlan’s side, at least. Not for Ryder, he refused to take the bait.
Harlan pointed a finger at him. “This isn’t happening, got that?” He went to answer the door.
“Sure it is, and the sooner you accept it, the easier this will be for you.” Ryder followed him down the hall. “This is really a nice house you have, by the way.”
“Shove it, Ryde.” Harlan yanked open the door.
Ryder hung back while Harlan spoke to someone, then turned with a bouquet of what appeared to be wildflowers in his hand. Ryder straightened and stared at the flowers. “Who sent you those?”
He wanted to wipe that smug look off Harlan’s face.
“Why, Mr. Halloway, did you think that you were the only one interested in me? That maybe I am so pathetic that no one would give me the time of day? These beautiful flowers come from a gentleman friend of mine.”
Oh, so Harlan wanted to play it that way, did he? Ryder crossed his arms over his chest. “I don’t think so. You don’t have a boyfriend. I know that for a fact.”
Harlan advanced on him, waving those stupid flowers around. “A fact? You know that for a fact? Is it so hard to believe that I could get flowers? So I just planned this delivery myself because I knew you were going to show up?” He inhaled the scent of the flowers, then shoved them under Ryder’s nose. “Smell those perfect flowers. Flowers that someone who would never humiliate and hurt me sent. They’re just lovely, don’t you think?”
Ryder tried to step away but his back bumped the wall, and he pushed into it. He turned his head to avoid the fragrant bouquet, but no matter where his nose went those damn flowers seemed to wait for him. His lungs seized on him, his trachea closing up. He gasped and wheezed, finally shoving Harlan away. He fell to his knees and clutched at his inhaler in his pocket. He shook it a few times and realized it was empty. He tried it anyway, praying for one last puff to relieve his abused chest. Nothing; nothing came out to relax his lungs, to expand them so he could take a deep, fortifying breath.
His eyes watered, and he dropped the inhaler to the floor. He looked up at Harlan now standing over him with those damn flowers clutched in his hand and pleaded with his gaze for some sort of help.

I annoy, love, respect, scare, seduce, hurt, anger, infatuate, frustrate, flatter, envy, amuse and tolerate everyone. I just do it better in writing thanks to a little thing called…edits.

I recently took the drastic step of quitting my EDJ (evil day job) and am now living in the gorgeous desert in Arizona making a go at this writing stuff full time…and I can’t see me regretting this decision ever.

Just like every other red-blooded human—I get a little bouncy when I get mail (any kind too…email, comments, private messages…you wanna do it, do it with me *winks*). So feel free to drop me a line—whether it's on my blog, twitter, PInterest, or you track me down on FaceBook or Google +…it's easy to catch someone who wants to be caught.

I specialize in writing boyxboy though I read almost everything...and I fancy myself as slightly funny every once in a while. :) 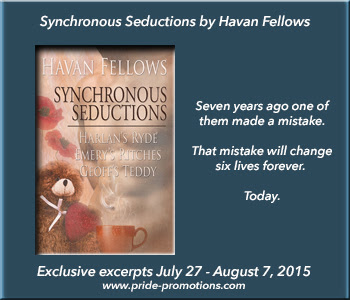