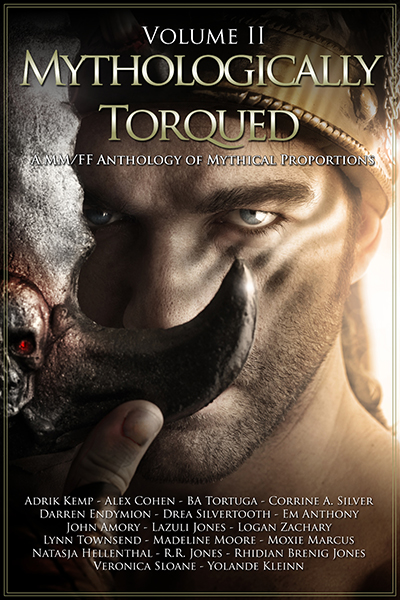 Mythology, whether classic or modern, has always taken readers on a magical ride. Mythologically Torqured, volume 2, takes those tales from days of old, or more recent history, and places a unique spin on the beloved lore.

The gods of Olympus make appearances, as do deities from Japanese, Native American, and other belief systems. With rampant sexual desires, these gods manage to slake their thirst for passions of the flesh in a rather untraditional manner... if the oral traditions passed down from generation-to-generation were at all accurate.

These eighteen stories are penned by both seasoned scribes and new authors; the anthology provides readers with the perfect opportunity to explore offerings from their favorite storytellers as well as find a new favorite or two. And, a unique perspective on the stories we enjoyed—or were forced down our throats at the hands of a sadistic English teacher or two—in our youth.

That night Luis dreams for the first time in years.

His surroundings are a surreal clash between pub and coffee shop. The bar is one he frequents only when he craves the noise and companionship of a crowd instead of an empty studio. The coffee shop is where he sat only days ago, agreeing to take on his first commission in ages. The mix of locales is strangely chaotic, too many details going awry between them. Gray windows hang opposite the bar itself, reflected by a wide mirror along the back wall. Yellow light glints from the ceiling, painting the pub brighter than Luis has ever actually seen it.

The booth he occupies is plush, empty but for himself, and the cushions beneath and behind him are cracked with wear.

"Can I join you?" a coffee-smooth voice asks, and Luis raises his eyes to find absolute perfection smiling down at him.

He can't answer. His voice has frozen in his throat.

"I'll take that as a yes," the man says, dropping into the booth across from Luis. Mischief glints in dark eyes, and Luis stares in helpless silence, taking in everything he's been searching for in a thousand unsuccessful sketches. Sharp cheekbones cut across a narrow face, perfectly symmetrical and softened by a widening smile. The face is narrow, but the jaw is strong, the nose straight and broad and fitted perfectly to deceptively delicate features. There's an uncanny smoothness to the brow where it slopes beneath dark curls, but the smoothness creases when sharp eyebrows rise in pointed amusement.

Generous lips quirk into an even wider smile, and the man asks, "See something you like?"

Luis tries to reply, but he's still too floored. Even knowing this is a dream, he's mortified with himself for gawping. It's embarrassingly difficult to summon his voice and answer.

"You're perfect." He means to say more, but a grating alarm sounds, jarring him. When he blinks he's not at the bar any longer, but at home in his own bed, early sunlight piercing between window curtains and the alarm clock a cacophony in his ears.

The grogginess of sleep vanishes in a rush of adrenaline, and Luis reaches for the sketchbook on his nightstand

from By Hand and Heart by Yolande Kleinn