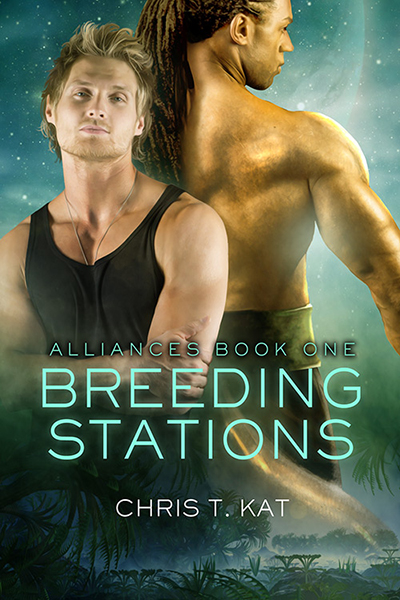 Spunky commander Berit Turner is known for two things: his huge libido and his lack of a filter—he says what he thinks. Berit sets his mind on being part of the mission to Ligador, to make sure the planet is habitable for humans. He’s ecstatic when his team is assigned to the task force. A delegation of Nadisc, a humanoid alien race, accompanies them, and passion ignites between Berit and their commanding officer, Tom. But Berit is determined that Tom is just another notch on his bedpost, as he doesn’t do relationships.

The excursion to Ligador goes wrong from the beginning, when they discover Ligador has been established as a breeding station by their worst enemy: the Tash’Ba. Dinosaur-like creatures become the team’s worst nightmare, and staying alive is going to take everything they’ve got… and then some.

Chris T. Kat lives in the middle of Europe, where she shares a house with her husband of many years and their two children. She stumbled upon the M/M genre by luck and was swiftly drawn into it. She divides her time between work, her family—which includes chasing after escaping horses and lugging around huge instruments such as a harp—and writing. She enjoys a variety of genres, such as mystery/suspense, paranormal, and romance. If there's any spare time, she happily reads for hours, listens to audiobooks or does cross stitch.

Today I’m very lucky to be interviewing Chris T. Kat, author of Breeding Stations.
Hi Chris, thank you for agreeing to this interview.

Wicked Faerie's  - What’s the best line you ever wrote?

Chris T. Kat - That question really stumped me. I’m still not sure how to answer that, to be honest. I’ve never had a favorite or best line in one of my books. There’ve been paragraphs or scenes (mostly conversations) that I really enjoyed writing, so how about this conversation between Berit and his best friend Carson from chapter ten:

“Have you never been afraid? The thought of having someone stick something up my ass alone is giving me the chills.”
I shrugged, and towed him over to my bed. There we sat down next to each other. I clasped my hands between my legs and gave him a sideways glance. “I never really thought about it. I just went with the flow and it was all good for me.”
“Isn’t it… weird?”
“It depends.”
“On what?”
“Do you really want to talk to me about the size and girth of cocks, and how different it feels when they fuck me?” I asked.
Carson grimaced. “If it’s not absolutely necessary, no. I’ve got enough nightmares from the one time I untied you from that bench.”
Heat suffused my cheeks, and I averted my gaze. “You keep going on about that one incident.”
“The guy was over eight feet tall, his back was covered in poisoned thorns, and he was about to drink your blood. Do you really believe I’ll ever forget that?” Carson asked as a shudder ran through him."

WF -  Do you listen to music while writing? If so, what kind?

CTK - Yes, I do. My choice of music depends on the story I’m writing. Most of the time I listen to pop music. I have to make sure I listen to music sung in English, though, because listening to music in my native language (German) throws me out of my writing flow.
For Breeding Stations, I listened to soundtracks, especially from Star Trek VIII and IX. They catapulted me into the right mood for this story. J

WF - If your book were made into a movie, what actors would you like to see star?

CTK - For Berit, I’d love to see Andreas Pietschmann, a German actor, play the role, since I based Berit’s appearance on him. I loved this actor in a German cop series and immediately knew he’d be my Berit.
As for Tom—I’ve got no idea. The guy would have to be a big, muscular man, with a nice smile and long dreadlocks.
I usually don’t have real people / actors in mind when I write. This is actually the first time ever that I based a character on a photo of a real person. Most of the time, I’m perfectly content with my imagination.

WF - What genres do you write in?

CTK- Oh, a lot of different ones. ;-) My main genre is m/m, but within that I’ve written contemporary romances, paranormal/fantasy romances, and now science fiction. I don’t like to settle in one genre because I enjoy them all.

WF - Where and when do you prefer to write?

CTK - I write in the living room at a small desk. Since my writing time is reduced to the weekends (plus holidays and breaks) I write regularly on Saturdays and Sundays. I only write in the morning because I can’t form coherent sentences in the evening—at least not in English. ;-) Usually I start between nine and ten in the morning, and write for two or three hours. I also need my kids to be around playing. If it’s too quiet, I can’t get into the swing of things. Yup, I know, I’m a bit on the weird side. 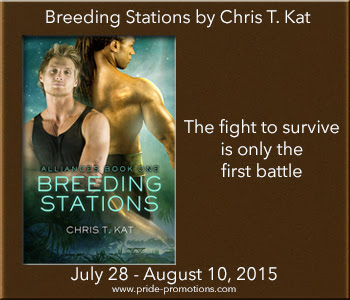