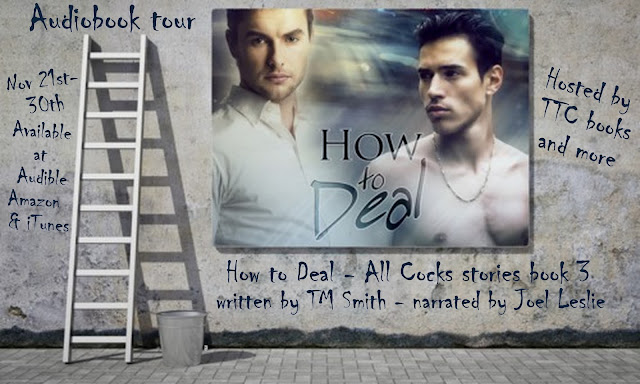 Welcome to the How to Deal Audiobook tour, hosted by TTC Books and more.

How to Deal is the 3rd book in the All Cocks Stories and is now available in Audiobook format in addition to E-book and Print. 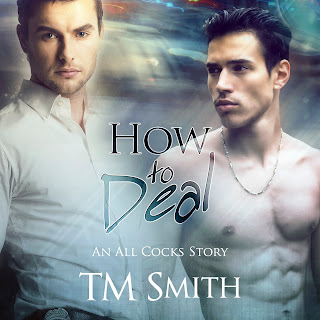 Jon Brennan comes from a long line of men in uniform; all born and bred to both bleed and wear blue. His family and the majority of his co-workers support him every step of the way, so he doesn't need to hide the fact that he prefers men over women. Between the job and his larger than life, loud and rowdy half Irish, half Italian family, there isn't much time for dating, much less finding a guy who can deal with the stress and demands placed on the shoulders of an NYPD detective.
Kory White is cocky and abrasive with most people, but it is all a facade he hides behind to keep his heart safe. As a child, Kory lost his mother to an act of violence. Soon after, he and his baby sister Kassandra were separated by the system. Kassandra was immediately adopted, but Kory spent the next 10 years cycling through foster homes before moving to the Big Apple. In an effort to keep everyone at a distance, Kory has meticulously built himself an alter ego: Hayden Cox, All Cocks cockiest model.
These two strong-willed men definitely prove opposites do attract. Both are stubborn and hard headed to a fault, Kory more so than Jon. But Jon is used to being in control, the one calling the shots, and Kory fights him at every turn. Just when it seems they have found a way to navigate the unchartered territory that is love, tragedy knocks on Kory's door yet again. Volatile and strong, even in the face of adversity, both men refuse to give up on each other - or their love.
©2015 TM Smith (P)2016 TM Smith 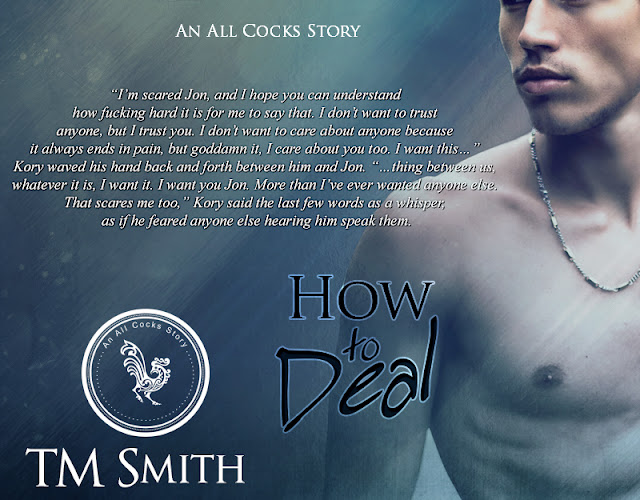 Exclusive Excerpt - (Part 5 - follow the other blogs below for parts 1-4 and part 6)
Hayden stood there slowly stroking his cock, pinching one of his nipples, watching Connor as he lifted one leg up onto the bed, giving Hayden an unobstructed view of his hole. Connor watched Hayden as he jacked himself, and Hayden watched Connor finger his hole, preparing himself to take Hayden’s dick.

“Enough. Get on your hands and knees,” Hayden barked. Connor grinned up at him lasciviously, licking his lips as he slowly pulled the three fingers he had buried in his ass out.

“Yes sir, Officer Cox.” Connor flipped over onto his hands and knees, jutting his ass up in the air as he looked over his shoulder, grinning.

Hayden pulled a condom out of his pocket, tearing it open with his teeth before sheathing his cock and pumping a couple times, quickly walking over and sliding into the space between Connor’s legs. “Gonna fuck you dry and make you bleed, make you scream for me. That’ll teach you to behave.”

Of course, that was all for the camera, for the scene. What the finished film wouldn’t show was the bottle of lube that was shoved between the mattress and the wall that Connor had lathered his hole with while he fingered himself. Or the super-sized butt plug he had inserted a few hours before the shoot to stretch himself well and good prior to filming. Connor was a big man, but even the biggest man needed a little prep before taking a dick up the ass.

How To Deal is the third book in the All Cocks series and features Kory and Jon's story. I highly suggest reading this series in order as all the characters are part of the others stories and you may miss previous events and backstory that is important to the current story. How To Deal is Kory and Jon's story, both of these characters were introduced in the first book of the series, Gay For Pay.

Kory life experiences have jaded him enough that it's given him a bit of an abrasive attitude. It almost makes him unlikable because how he acts ends up hurting others at times. Now you can see that there is more to Kory than his attitude from the first but it's what he projects the most and makes him a bit of a b*tch to be around at times. Until he and Jon become interested in each other. Honestly I kind of though Jon was crazy to be interested in Kory or that Kory wouldn't return Jon's interest. Kory surprised me when he did agree to date Jon and things kept developing between them.

Now this isn't to say that everything is smooth sailing, because it absolutely is NOT because of Kory's past. It really does affect him and makes him keep trying to push Jon away and anyone else who gets close to him. Jon isn't a saint either, and he works to piss Kory off as much as he tries to love Kory. Honestly though, these two are perfect for each other in their imperfections. They push each other to the limits of sanity but don't back down from the other's issues. It really does make the story the absolute best for these two characters.

The secondary cast and the other events in the book really add the additional drive to this 'year in the life' of a relationship and give it the added dimension that it needed to round out Jon and Kory's story. I loved Jon's crazy family, especially his grandma who spouts off in Gaelic and is so opinionated. All in all the elements added up just right for this story and made it  one of my favorites in the series so far.

There is a tragedy toward the latter half of the book that not only impacts Jon and Kory but other characters in the series. This story arc will continue on but you see how Jon and Kory react and respond to each other. It happens at a point in their relationship that you can see how much Kory has grown used to having others in his  life and also learning to lean on others when necessary. The storyline for these two characters really worked to showcase who they were, and how they grew both separately and together.

This was my first experience of listening to an audiobook narrated by Joel Leslie. I completely loved his narration of How To Deal. He did an excellent job distinguishing the 'voices' of the characters. Every inflection of Kory losing his sh*t to Jon's wild family to Victor's accent were particularly spot on and really made the story come to life. You could 'see' the characters reacting and interacting with his vocalizations and hear the various emotions they go through during the course of the story. Now I need to go back and buy the other two books that he's narrated for this series. 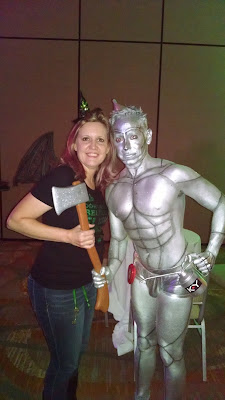 Joel is a UK transplant, growing up with an American parents in a British commonwealth.  He is often cast for his unique ability to deliver native, authentic combinations of both American and British sounds.  His wit and comedic timing also appeal to producers.  He has developed a strong body of work for young audience, historical, fantasy, new-adult, romance and m/m fiction.
His author’s have praised him as “a narrator among narrators, a man whose ability to create different characters rests on the power of his voice and his impeccable delivery”,  and a “true delight…" "legendary, and his professionalism, good humor, and charm make him a dream to work with”, "Anyone else would only be second best”.
Joel records under two names, for mainstream and children’s fiction as Joel Froomkin, and for m/m and adult material under Joel Leslie and has consistent access to home studio for all production needs.
{Image compliments of Author TM Smith (flying monkey) and Joel Leslie (Sexy Tinman) via GRL 2016 in Kansas City} 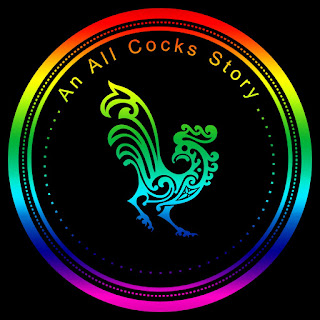