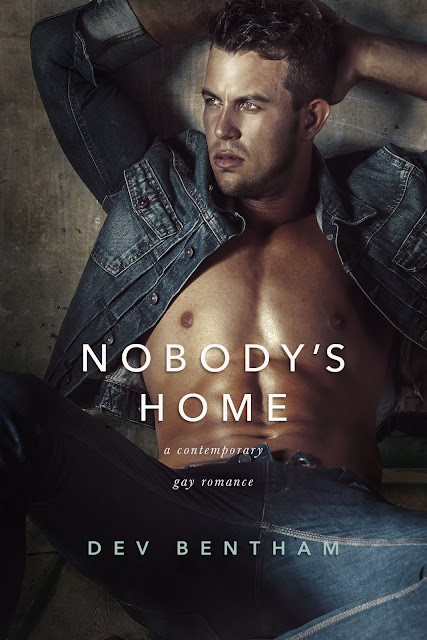 Second chances can appear where you least expect them.

An artist: You can’t go home again—that was Nick’s motto for the past twenty years. He was a teenager when he left his abusive, mentally ill father back in Lacland, a small town in the northwoods of Wisconsin.

Nick’s made a successful life for himself in New York. Then comes the call—his estranged father has killed himself. Nick flies home to a house crumbling from years of neglect, and one very fat bulldog.

And a veterinarian: Jonas doesn’t love his job enforcing university research protocol. His passion is working with dogs, especially volunteering for his boyfriend’s behavioral studies projects. But when he discovers his so-called "life partner" is messing around, he leaps at a job offer in a small town miles away.

In spite of the grief swirling around Nick and Jonas, their first meeting is electric. But Nick will be in town for only a short time and Jonas is still stinging from the betrayal. The men try to keep their distance, but that’s easier said than done, especially in a small town where misery and hope share the same address.

This poignant story about two mature gay men will warm the hearts of readers who believe happy endings are within anyone's grasp.

**This is an author’s version of the original story first printed in 2013 by Amber Allure.**

Somewhere in the middle of the third song, a guy at the bar caught his eye. Tall, thin, with a slight stoop to his shoulders and big sad eyes. He had the kind of tragic beauty that always got to Jonas. And for some reason he was staring at Jonas. The guy’s gaze locked with Jonas’s and he felt a thrill of excitement shoot through him. How long had it been since someone looked at him like that? Ever?

Jonas held the gaze while he danced. The tight band of fear in Jonas’s gut that kept him from making a fool of himself snapped and he felt a sudden surge of freedom. He shoved aside the thought that he’d regret it tomorrow and let himself revel in the feeling of that gaze glued to him. The guy bit his lip. His eyes slid down Jonas like a caress, like a promise. Jonas leaned into the feeling of being wanted. Fenton’s betrayal disappeared into the background.
Jonas danced toward Adam, leaned down and shouted, “Who’s that?”

Adam followed his glance. His brows furrowed, he peered and then he looked surprised. “Wow—that looks like Nick Alsteen.”

Jonas nodded and danced away. He—Nick?—was still watching him. The song ended. Jonas walked to the bar, telling himself he was meeting the neighbors and having a beer. He leaned against the bar, two stools down from the guy who might be named Nick. Then the realization of what he was doing hit him and he ordered a double scotch.

Nick slid onto the stool beside him. “Hi.”

Jonas looked into his eyes. They were sad and dark in the dim light. “Hi.”

His curly dark hair looked soft, like a spaniel’s ear. Jonas had to hold onto the bar to keep himself from touching it. Which was weird. Jonas couldn’t remember feeling this drawn to a stranger. To anyone, really. It was probably a reaction to the turmoil of the last few days.

Nick was looking at him with a crooked smile and those meltingly sad eyes. He nodded toward the dance floor. “Your boyfriend?”

Jonas started. Boyfriend? Did he mean… “Adam? He’s a kid. Without a daddy kink. I mean, no. Of course not. I hardly know him. His boyfriend is in the band.” Jonas sputtered to a stop, mortified.

The bartender set down his drink. Jonas closed his eyes and downed it.

When he opened them Nick was still there, looking amused.

“Sorry. I’m not good at this.” That was an understatement. He should get out of there. Instead he heard himself ask, “Want to dance?”

Nick’s lips twitched slightly. He gave a skeptical glance toward the stage. “I’m more of a classical, blues, indie kind of guy.”

Well, that was that. Rejected again. Jonas signaled the bartender. One more drink and he was out of there. Home to Gunner to bury himself in work or something.

Nick leaned close, his breath hot on Jonas’s neck. “A slow bump and grind to Etta James would be nice though, don’t you think?”

I write contemporary gay romance. My characters are flawed and damaged adult men who may not even know they’re looking for true love, but when they meet their bershert, their true love, their lives are transformed. My stories are set in the real world where gay men have gay friends, families who do or don’t accept them, personal histories they’re not necessarily proud of and a myriad of experiences that have made them who they are.

I live in Northern Wisconsin with my Boston Terrier and Chicago spouse. I’ve published short stories, poetry, newspaper articles and academic papers and have worked in nearly every profession from restaurants to retail to open-water diving and now write m/m romance out of my fascination with love, courage and gender.