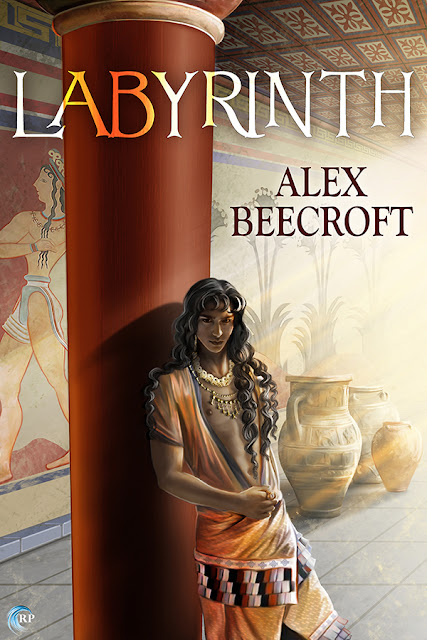 I understand this blog post will be coming out at the very end of November, but I'm surprisingly organized at the moment, and I'm writing it on National Coming Out day. When Blue Steel Chain came out, I talked a bit about coming out as an asexual, after having only found out that there was such a thing at age 45.

But today, continuing my process of writing stories that have personal relevance to myself, I want to talk about gender, in the sense of the gender binary. Up until fairly recently, it's been assumed by most people that there were two genders, male or female, and that both came with certain social roles attached. So people of the female gender would be less aggressive than those of the male, they would be better at communication and working in teams, but not as good at spacial awareness or lifting heavy objects.

I explain this stuff badly because I have never really understood it. All my life I've been certain I wasn't a woman. But since about age twenty or so, I've really found it difficult to believe I was a man either. As I unlearned my internalized misogyny, I grew more reconciled with everything feminine, but never to the extent that I felt I was included in that group.

Over the years it's caused me no end of distress. What bathroom should I use? If I was in a social situation with different uniforms for different genders, I would feel like a fraud whichever one I wore. Every time the topic of gender would come up I would try and try to get to the bottom of what the hell it was and how it applied to me, and I would fail, and I would feel like such a freak, you've no idea. I remember my parents almost weeping with relief when I wanted to get my ears pierced because they were afraid I would always look like a boy. I didn't have the heart to tell them it was because I wanted to wear a single earring like all the hard lads, and I knew this was the only way to get them to agree.

I used to think that everyone felt the same way about gender – that it wasn't real, that it was stupid and would soon die out because it was nothing but an annoyance. But then I had children, and my daughter knew she was a girl from the moment she could make her opinion known. She forced me to buy pink things. She forced me to acknowledge femininity as a good thing – she liked it, and I wasn't going to dismiss anything my daughter found valuable.

And then I had my other child who was assigned as female at birth, but he too knew, as soon as he could speak, that he was a boy, and he moved the world to get it to agree.

I saw that for them their gender was innate, obvious and extremely important, and it became clear to me that my lifelong inability to know what I was was unusual and specific to me.

Since then, I decided that if I hadn't figured it out in 50 years, I was unlikely ever to, and I've settled on defining myself as a person who doesn't have a gender. That makes me agender, or genderqueer, or non-binary.

I remember I used to feel a kind of kinship to angels, who were supposed to be sexless, and to eunuchs, who occupied a liminal space between men and women. Not quite one, not quite the other. You will see me writing more eunuch characters in the future, I think. Those were the only models I had of people with whom I felt I could identify.

But that was a case of my own ignorance, thank goodness. Because it turns out there have been third-gender people throughout history. And – now we're finally coming to how this is relevant to Labyrinth – the Minoan civilization was one of those places.

It's too late now to make a long story short, so I'm going to summarize the evidence for there being a third gender in Minoan civilization by saying that there are persons in the wall-paintings who are depicted with the wrong colour skin or the wrong clothes for the sex they appear to be. There are depictions of full breasted people with phalluses, and there are people who even the scholars cannot decide what sex they're supposed to be.

The more we look, the more Minoan goddess worship seems to have influenced or been influenced by, or be part of a continuum with Greek and Anatolian goddess cults, and to share the concept of the Cybellian eunuch priest/ess-hood. 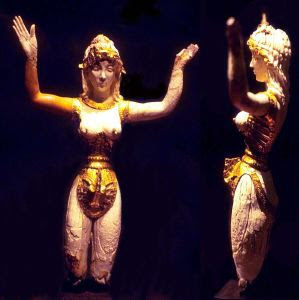 That's where I went to for my non-binary main character Kikeru. And then of course I thought “Well, it's nice that there was a role for NB people in that society, but what about the NB people who didn't want to dedicate their lives to a goddess? What if they wanted to have a normal life making pottery instead?” Not everyone wants to be holy, you know? Not even those who are born or marked out to it.

So Labyrinth is, I guess, a very ungrateful book! I went and found a civilization in which my non-binary character could have the option to talk about their gender dilemma and be accepted into society in an honourable role. And then I made Kikeru want something different. Because what's a story without conflict, eh? Even if the conflict is five thousand years out of date, some of us can still relate.

I hope it works for you too!

Kikeru, the child of a priestess at the sacred temple of Knossos in ancient Crete, believes that the goddesses are laughing at him. They expect him to choose whether he is a man or a woman, when he’s both. They expect him to choose whether to be a husband to a wife, or a celibate priestess in the temple, when all he wants to do is invent things and be with the person he loves.

Unfortunately, that person is Rusa, the handsome ship owner who is most decidedly a man and therefore off-limits no matter what he chooses. And did he mention that the goddesses also expect him to avert war with the Greeks?

The Greeks have an army. Kikeru has his mother, Maja, who is pressuring him to give her grandchildren; Jadikira, Rusa’s pregnant daughter; and superstitious Rusa, who is terrified of what the goddesses will think of him being in love with one of their chosen ones.

It’s a tall order to save Crete from conquest, win his love, and keep both halves of himself. Luckily, at least the daemons are on his side.

Beecroft won Linden Bay Romance’s (now Samhain Publishing) Starlight Writing Competition in 2007 with her first novel, Captain’s Surrender, making it her first published book. On the subject of writing gay romance, Beecroft has appeared in the Charleston City Paper, LA Weekly, the New Haven Advocate, the Baltimore City Paper, and The Other Paper. She is a member of the Romantic Novelists' Association of the UK and an occasional reviewer for the blog Speak Its Name, which highlights historical gay fiction.
Alex was born in Northern Ireland during the Troubles and grew up in the wild countryside of the English Peak District. She lives with her husband and two children in a little village near Cambridge and tries to avoid being mistaken for a tourist.

Alex is only intermittently present in the real world. She has led a Saxon shield wall into battle, toiled as a Georgian kitchen maid, and recently taken up an 800-year-old form of English folk dance, but she still hasn’t learned to operate a mobile phone.

She is represented by Louise Fury of the L. Perkins Literary Agency.

To celebrate the release of Labyrinth, one lucky winner will receive their choice of an eBook off Alex’s backlist! Leave a comment with your contact info to enter the contest. Entries close at midnight, Eastern time, on November 26, 2016. Contest is NOT restricted to U.S. entries. Thanks for following the tour, and don’t forget to leave your contact info!