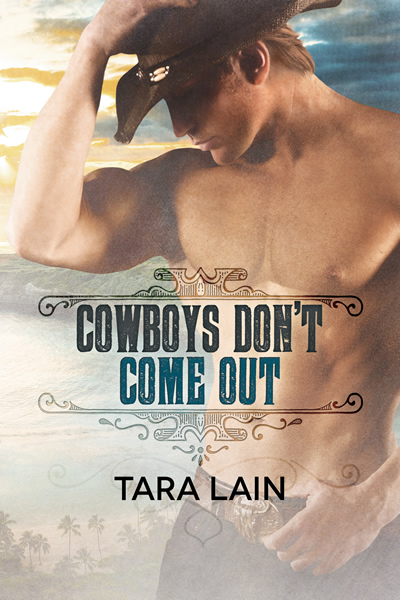 Rand McIntyre settles for good enough. He loves his small California ranch, raising horses, and teaching riding to the kids he adores—but having kids of his own and someone to love means coming out, and that would jeopardize everything he’s built. Then, despite his terror of flying, he goes on a holiday to Hana, Hawaii with his parents and meets the dark and mysterious Kai Kealoha, a genuine Hawaiian cowboy. Rand takes to Kai’s kid brother and sister as much as he drools over Kai, but the guy sports more prickles than a horned toad, and more secrets than the exotic land he comes from.

Kai’s earned his privacy and lives to protect his “kids.” He ought to stay away from the big, handsome cowboy for everyone’s sake—but since the guy’s just a haole on a short vacation, how much damage can he do? When all of Kai’s worst fears and Rand’s darkest nightmares come true at once, there’s not much chance for two cowboys who can’t—or won’t—come out.

He half opened one eye. Boobs! And large blue eyes somewhere above them. The redhead leaned over and peered at him. He opened the other eye, trying to stare at her face and not her breasts or the guy’s cock directly behind her. “Hi.”
She stood upright, which brought her breasts into a less dangly position. Beside her, the cute, dark-haired girl stood with her arms crossed and her legs crossed, which managed to pretty much obscure her girlie parts.
The redhead smiled. “Aren’t you the guy who was dancing at the bar last night?”
“I was dancing there, yes.” His eyes pulled toward the man, but he yanked them back.
“You’re really good. Where’d you learn such a mean two-step?”
“Uh, I, uh, I’m a rancher, sort of. I mean, I raise horses and—”
“You’re a cowboy!” She sort of jumped, which proved distracting despite his limited interest in her charms. She looked over her shoulder. “Kai, another cowboy.” She stuck out her fist. Rand hesitated, then bumped his fist against hers. “I’m Audrey, by the way. This is Moke.” She pointed to the girl, who nodded. Then she turned. “And this is Kai. He’s a paniolo.”
Kai also nodded but didn’t step forward or offer a hand. His expression? Wary, maybe. At best, neutral.
Audrey definitely claimed the spokesperson title. “So are you coming back to the club?”
“Uh, I’d like to. I haven’t made any plans or anything.”
“Why don’t you come with us tonight? Moke’s a real good dancer, and we can switch and stuff. I mean, if your girlfriend wouldn’t mind.” She fluttered her lashes just a tiny bit. Hmm. He’d been operating on the assumption she was Kai’s girlfriend. Maybe Moke was?
Moke looked pleasant, but Kai didn’t look especially welcoming. “She’s not my girlfriend. We just met yesterday at the hotel.” Audrey smiled bigger. He shrugged. “But I don’t want to barge in.”
“No barging. We’d love to have you. I mean, this is a small town, brah. We don’t get a lot of mainland cowboys here.” She laughed. “Right, Kai?” She looked back at him.
Kai gazed unblinking at Rand with his dark eyes. “Sure. Come if you want.” With that, he turned and flexed one of God’s most perfect asses all the way back to the water.
Audrey sighed. “Don’t mind him. He saw High Plains Drifter one too many times.”
Rand snorted. “Man of few words. What’s his story?”
She flopped down on the sand, which took her well-trimmed pubic hair out of the line of sight. Patting the sand next to her, she pulled Moke down to sit as well. “Kai’s a genuine paniolo, descended from generations.” She looked at Moke.
Moke nodded, and for the first time Rand heard her voice—soft and low. “His father descended from the first vaqueros.”
He cocked his head. “Vaqueros, like Spanish?”
“Mexican. King Kamehameha invited a few Mexican vaqueros to Hawaii to manage cattle here. That began the tradition. Of course, most paniolo are now Hawaiian.”
Audrey grinned. “Moke used to live in Makawao, so she knows all this historical shit.”
Rand shrugged. “Yeah, well, I didn’t know any of it. When I think Hawaii, I sure don’t think cowboy.”
That earned him a cool glance from Moke. “And yet we had cowboys before California.”
He grinned. “You guys need your own John Wayne. Get some PR going.”
Audrey laughed. “Or a Hawaiian Clint Eastwood.”


“I thought you said he was just here.”