Her Trusted Highlander by Jennae Vale - Blog Tour with Giveaway 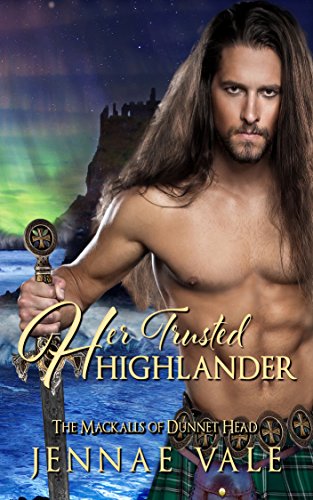 Her Trusted Highlander
by Jennae Vale

Blurb
Katriona Hughes has no idea how she’s managed to find herself in 16th century Scotland, but she’s beginning to think the emerald gem she picked up on an archeological site may have had something to do with it. Wanting nothing more than to return to her own time, Kat is betrayed by the first person she meets and forced into a marriage with a loathsome stranger. Now running for her life, Kat meets the one man who deserves her trust, but can she give it to him.

Nick Mackall is happy to finally be back in his beloved Scotland after accidentally being transported to twenty first century San Francisco and spending the last two years of his life there. His home and family are calling to him, but things are not about to go smoothly for the handsome highlander as he meets a young woman fleeing her husband and an old foe returns from the dead. Two things are certain - he must gain the woman’s trust in order to save her and he must stop his foe from unleashing the power of an imprisoned sorcerer.


Teeth chattering and hands like blocks of ice, Katriona managed to squeeze out from between locked jaws, “Can we stop, please?”

They had just arrived at a small icy creek.  It wasn’t completely frozen over, but the areas near the banks showed signs of ice here and there.

“We’ll cross first and then we’ll stop for a short while.  Laoch needs water and a rest, as do we.”  Nick expertly guided the horse to a low spot in the creek and urged the skeptical horse across.  Once on the other side, he dismounted after prying Katriona’s hands loose from his waist.  He reached up to help her down, but her feet were so cold, she could barely feel them beneath her and she wobbled on them as they touched the ground.  Nick steadied her and guided her to a nearby rock.  “Sit here.  I’ll get a small fire going to warm ye and while I do, mayhap ye can tell me why yer running away.”

Katriona had expertly avoided this subject until now, by sleeping or being in a genuinely bad mood, but she imagined she should give him some sort of explanation.  The truth was pretty unbelievable, but she could doctor it up so that she only told him the things that would make sense.  “There’s not much to tell,” she started.

“Where are ye from?” Nick asked.  He had gathered some wood and dried brush and placed it in a clear spot near where she sat.  As he knelt and got to work, he occasionally glanced up at her, awaiting his answer.

“Edinburgh.”  That was partly true.  She had been born there, but grew up in London and until only recently, still lived there.  If anything, she hoped to get to Edinburgh in order to seek help to get back to her own time.  Where she might find that help was another question she hadn’t yet answered.
“Ye dinnae sound like yer from Edinburgh,” Nick noted.

“Well, that’s because I was born there, but raised in London.”  That should satisfy his curiosity.
“And how did ye get all this way from London?”  He was trying to lead her into telling him her story and she was busy rewriting it in her head.

“I was traveling with my family and we were on our way to visit relatives in Sutherland when we were attacked by highwaymen.”  Was that the correct term for them?  Would they have been called that in the sixteenth century?  She wished she could be sure.  The last thing she wanted was to draw his suspicion.  Kat was an expert in medieval artifacts.  She could identify every pot, sword, shoe or shield, why it was used and who would have used it, but since being transported to this time period she’d had more than one moment of doubt about her knowledge of the time.  She was second guessing everything she said and did, fearing the outcome for her if she were wrong.

“I see.”  Nick had an ember started and was blowing on it to get the fire going.  After a moment or two, it flared up and the surrounding brush and wood were engulfed in flames.

Katriona breathed a sigh of relief as she moved closer to the fire, practically putting her frozen feet on the flames.  To her surprise and before she could stop him, Nick grabbed her feet and removing her boots, placed them near the fire.  He began vigorously rubbing her feet to get her blood circulating.  “Thank you.”  That was really nice of him and while it was an odd thing for a stranger to do for her, she was grateful.

“Back to yer story, lass.  I’m fascinated to this point.”  Was he being serious or was he teasing her?  He continued warming her feet and when he was done, put her lovely warmed boots back on and reached for her hands, which she gladly let him take.  His hands were large and warm and the heat he was creating with the friction of rubbing them was astonishing, but very much appreciated.

“Well, I ran and hid in the brush,” she continued.  “Everyone was killed, but the highwaymen couldn’t find me.  I could hear them yelling to each other as they searched and then they fled for fear of being discovered, taking all of our belongings with them.  I didn’t know what to do or where to go.  I was terrified, so I continued wandering through the woods.  Night fell and I curled myself into a ball to sleep.  At some point during the night I felt a boot nudging my thigh.  I opened my eyes to see a man standing over me.”  From this point on, the story she would share was true.  “I was terrified, thinking the men had come back to kill me too, but this man, Earnan Gibb was his name, reassured me that he wouldn’t hurt me, much as you did and I, being desperate for help, believed him.  He told me he’d help me get to safety and I again believed him.”  Her voice took on an angry edge.  “Little did I know that he planned to sell me to Bearach Calhoun for a small fortune.  The Laird apparently needed a wife and for reasons which quickly became apparent, I now understand why no one would have him.”  She gazed up into Nick’s very interested face and was drawn in by the warmth of his gaze, losing her train of thought.
“Go on,” Nick encouraged.

“Where was I?”  She was in serious trouble here.  Nick Mackall and his feet and hand rubbing, along with that face and that physique, were having a very curious effect on her.

“Oh, right.  Well, you see, he needs an heir and so, since no one else would have him, he bought me from Earnan Gibb and I was forced to marry him.  On our wedding night, I had about all that I could stand, so I refused him, what according to him were his husbandly rights.  Besides being a vile and disgusting human being, he is also a very violent man and he beat me when I told him it would be a cold day in hell before I allowed him to touch me.  I have the marks all over my body to prove it, as you’ve seen.”

“And ye tried to kill the man.”  It wasn’t so much a question as a statement.

“I tried, but unfortunately, I failed.  I was scared to death and I decided to run while I could still get away.  I stole a horse and I don’t even know which direction I headed in.  All I knew was that I had to get away.  If he catches me, I’m afraid of what he’ll do to me.”  She stared into the flames, no longer even aware of the warmth slowly thawing her extremities.

“That is quite the tale,” Nick wrapped her in the plaid from his saddle bag.  “I’m going to boil some water.  I’ve some food in my bags.  I’ll get it for ye.”

Kat sat perfectly still, reliving the nightmare of Laird Calhoun and her wedding night.  Hopelessness was a feeling she’d had a lot over the last few days, but Nick was giving her back a glimmer of hope as he took care of her now.  Her jaded heart found it hard to believe he was really going to help her and that he wasn’t perhaps exactly the same as the man who had offered her aid that night in the woods.  What could she do?  He wouldn’t let her get away and he was taking her somewhere – to his home, he said.  Only time would tell what awaited her; she hoped it would be as Nick had promised her.

Jennae Vale is an author of romance with a touch of magic. Her Scottish Medieval time travel series The Thistle & Hive, Books One through Four, is available in print and ebook versions from Amazon. The first book in her new series, The Mackalls of Dunnet Head has been released, with more to come throughout 2016.

Jennae started life in Massachusetts as part of a large extended Irish and Italian family of imaginative story tellers, but now lives in the San Francisco Bay Area with her husband, her dog, two cats and four chickens. Storytelling is her passion, but Jennae also loves to quilt,  cook, read and indulge in her crafting obsession when she’s not writing.

You can find Jennae at