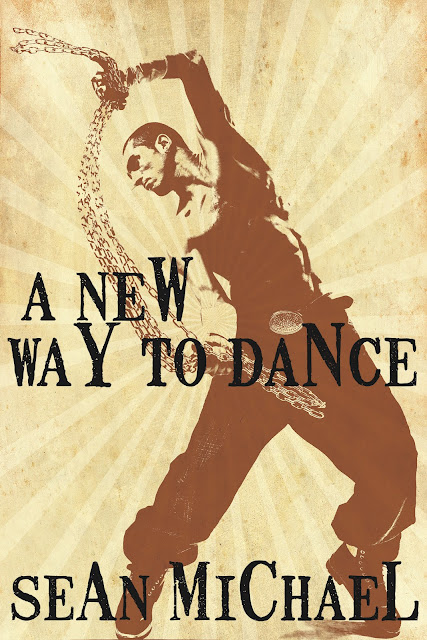 Dancer Seth Avery has it all. He’s at the top of his game as a dancer and he’s in love with famous dance director Fayden DelMonaco, the man who is his sub. Seth’s whole world is turned upside down when Fayden dumps him in the nastiest and most public way possible. To compound matters, he’s in near fatal car crash shortly thereafter that leaves him severely injured.

Brook Turner is an ex-lawyer turned micro-brewer, baby-brother of Seth’s best friend Lizzie. The two met briefly before Seth’s accident, but it’s when they meet again six years later that they get a chance to act on the attraction they’d initially felt.

With Brook’s help, Seth begins to heal not only from his residual physical injuries, but also from the emotional ones inflicted by Fayden. Will it be enough to keep the two of them together?

Join Seth and Brooke as they find a new way to dance together.

“Did you see USA Today, man?” Julian plopped down, eyes wide. “Fayden is… Well, he’s not naming names, but…”

Seth looked at one of his oldest friends and arguably the best choreographer he knew and tried not to growl. “I saw.”

He saw. His brother saw. His mom saw. His neighbor. Fayden’s sister. Ernie at the fucking convenience store where he bought his daily diet energy shot saw.

“World-Famous Director Escapes from Abusive Sex-Slave Relationship! Says He Feared for His Life!”

Julian’s eyebrow went up, the man not saying another word but still speaking volumes.
“What do you want me to say? I… I don’t have anything.” He had an apartment. The cops had let him take his car and computer—after they’d copied the hard drive for evidence.

“Honey, I’m on your side here.” Julian hugged him.

“I know. I do. Thank God for that.” Who else would he have called from the jail? His lawyer was Fay’s. His friends were Fay’s. Julian was it. His saving grace.

“Come on out with me tonight. There’s a new bar that we haven’t ever been to—he won’t be there.”

“No. Not yet. I’m not going out right now. I need to recover.” Seth needed his space.

“You need someone to take the bad taste of that asshole out of your mouth,” Julian said.

Seth blinked, then started laughing, deep, full belly laughs that felt so good. God, this sucked so hard. “I caught him with another man. That new dancer. Dylan.”

“Shit, he’s old enough to be that boy’s grandfather!”

“Yeah. Well, you know…” Seth was going to lie down and die, simple as that. Okay, he wasn’t, but he was going to pretend to, mentally.

“You think we should warn Dylan what a predator asshole he is?”

“Poor, innocent, victimized Fay?” He shrugged. “You wait. I’ll stop getting jobs soon.” It was inevitable.

Julian shook his head. “That’s not fair.” Seth noticed that his friend didn’t say it wasn’t going to happen.

“Life’s not fair. I have to work out and head home. I have an audition for a music video in the morning.” Hopefully he’d make a good impression. It would be good to put some money in the bank before the jobs started drying up.

Julian hugged Seth tight. “If there’s anything I can do, honey…”

“I love you, honest. Maybe we’ll meet for brunch on Sunday? Somewhere new?” Somewhere the paparazzi and Fayden wouldn’t be.

“Absolutely.” He grabbed his coffee and headed out of the little coffee shop outside of the studio he’d rehearsed in most of his adult life.

He was going to lose that too, he’d bet. Everything was going to just disappear because Fay had decided to trade him in for a younger model and was doing it in the nastiest way possible. Seth could feel everyone staring at him, could hear people talking about him.

He couldn’t stand it anymore and it was only going to get worse.

“Hey. Seth. I…” Lizzie Bean came up, took his arm, the leggy dancer as tall as he was. They’d worked together a hundred times at least. “I don’t know what to say except that I love you, man, and people suck.”

He made this weird half-tickled, half-surprised sound. “They totally do. God, they do.”

“Come have supper with us? Mel is grilling chicken.”

Mel was an amazing cook. And it was tempting, being with people who wouldn’t look at him like he was a monster.

“Please. Come on. You look exhausted and I promise to just feed you foods with no real calories and ply you with wine.” She put her hand on his arm. “Please.”

She beamed at him and slid her hand into the crook of his elbow when they started to walk. Lizzie and Mel lived not that far from the studio in a converted loft with the most amazing roof garden full of potted trees and flowering plants and several large raised areas where they grew vegetables.

Mel was big into farm-to-table cooking and tried to grow as much of his own produce as he could.

Lizzie told him a story about one of Mel’s nephews—the man had far too many nieces and nephews to keep track of—who had gotten a skateboard for his birthday and become the terror of the neighborhood.

Seth tried to laugh in all the right places. Every so often he’d catch sight of himself in a window, just the barest hint, and he’d sigh. He’d really thought Fay was his Mr. Right.
They’d been into the same things, the chemistry had been off the charts, they were uber-compatible in bed…

Thank you very much to Wicked Faerie's Tales and Reviews for hosting me today!

I love it when I can set one of my books in Ottawa. I feel like I can add so many authentic little details that help give color and atmosphere to the books. I know exactly how things look, so there’s no need to build an imaginary street or town in my head. While I might still make some stuff up, it feels more authentic surrounded by the real details.

A New Way to Dance is set in Ottawa, and it was great fun to be able to give Brook and Seth details that were solidly set in real places. Seth works at Ottawa University, which is right downtown. So is the pub they meet up in at the beginning of the book. Brook lives outside of a real little town near Ottawa, though his house and microbrewery are entirely made up.

All this meant I could really picture the places as I was writing, from experience instead of pictures or made up out of my imagination. I’m hoping that added a little extra flair to the details of the book.

“Okay.” Brook had a couple of mouthfuls before asking, “So asking you to dinner is clearly out. Do you like movies?”

“Yeah. I usually try to see everything in the cinema, and then I buy my favorites when they come out on Blu-ray.”

“Wow. You really like them. I go to the movies a couple of times a year, I guess. I have a thing for Hugh Jackman,” Seth said.

“Oh yeah, love him. There’s something very sexy about a wolfman.” Brook finished his cheesecake. “Did you want to come back to my place and watch a few movies? As you can guess, I have a wide variety of them. Lots of choices.”

Seth thought about that. He didn’t have classes until Monday and he didn’t have any reason to say no. Not one that he felt like using. Something inside him wondered if he’d still be dancing, still be in Toronto if he’d taken Brook up on his offer that night so long ago. “Are you sure you don’t mind? I’d need a ride home after.”

Before Seth could tell Brook that he could pay for his own, the man was gone. He shook his head and planted his cane, getting himself upright and moving.

Brook came back and grabbed his messenger bag, throwing it over his shoulder, and settled his other hand on Seth’s lower back. “Do you need to hold on to my arm on the wet pavement?”

“If you don’t mind. I don’t fall gracefully.”

“I don’t mind at all.” Brook’s hand slid away from his back and Brook offered his arm to Seth.

He took it, heading out into the downpour, aiming a grateful smile at Brook as he opened an umbrella.

“I’m parked in the south lot, it’s only a few minutes away.”

“No problem.” Once he got moving, Seth did all right.

Even with the rain they were soon at Brook’s car, the blue Corolla nice and dry, and soon there was heat pouring from the vents.

His hips ached, but the heat helped. “Where do you live?”

Seth lived in a small apartment, but it worked for the time being. Eventually he’d find a perfect little house, something he could pay cash for, but he hadn’t found it yet.

“Just south of the city, near Manotick. Used to be a farm, now it’s my brewery.”

“I live close to Ottawa University. Within walking distance.”

“I don’t drive anymore. It’s too painful.” And he was frightened. Just the thought of it made him ache.

“It does. I have an apartment that I’m renting right now.”

“It’s a nice city, isn’t it? Lots of green.” They were zipping along the highway, the roads surprisingly clear, if wet.

“It took me a little while to learn where things were, but I enjoy it, yeah.”

The car slowed, Brook concentrating as he turned down a little tree-lined side road.
He stayed quiet, letting Brook focus, drive.

Often referred to as “Space Cowboy” and “Gangsta of Love” while still striving for the moniker of “Maurice,” Sean Michael spends his days surfing, smutting, organizing his immense gourd collection and fantasizing about one day retiring on a small secluded island peopled entirely by horseshoe crabs. While collecting vast amounts of vintage gay pulp novels and mood rings, Sean whiles away the hours between dropping the f-bomb and pursuing the kama sutra by channeling the long lost spirit of John Wayne and singing along with the soundtrack to “Chicago.”

A long-time writer of complicated haiku, currently Sean is attempting to learn the advanced arts of plate spinning and soap carving sex toys.

Barring any of that? He’ll stick with writing his stories, thanks, and rubbing pretty bodies together to see if they spark.

Sean’s available for interviews, by the way. He can always be talked into, well talking about himself. Just drop him an email.