A Way With Words by Lane Hayes - Release Blitz with Excerpt, Review, and Giveaway 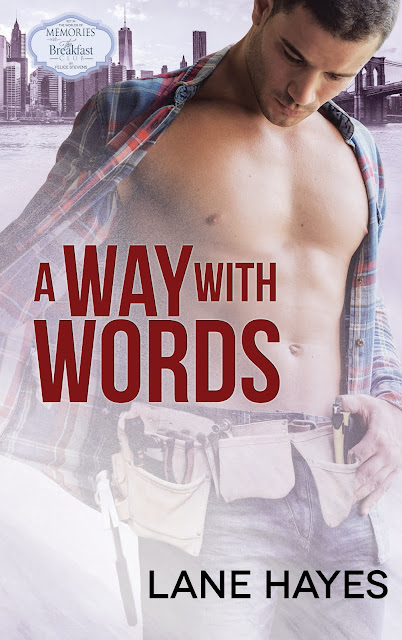 Tony De Luca is a simple guy. He works for his uncle’s Brooklyn-based construction firm. And he knows from experience that keeping his head down and doing his job is the best way to deal with the meddlesome family members he sees daily. They think he’s quiet and maybe a little awkward but the truth is more complicated. Tony has a secret he isn’t ready or willing to share. He’s an expert at avoiding familial scrutiny. At least he was until the sexy guitar player showed up.

Remy Nelson is a small-town, free-spirited guy looking for a new life in the big city. He stays busy playing his instrument on a busy Manhattan street corner during the day and bartending at night. Remy is more interested in finding steady employment than a mate, but he can’t deny his attraction to the dreamy construction worker with soulful eyes, a kind heart, and a unique way with words. Falling for Remy wasn’t what Tony expected, but keeping him will require courage. And an end to keeping secrets.

“Yeah, except you make me sweat,” I admitted with a half chuckle. Then I added, “In a good way. I like you.”

Remy hummed softly and sidled closer to me, resting his thigh against mine. “I like you too, Tony. You make me smile.”

We stared at each other for a long moment. All those funny details came rushing at me. Things I never noticed about other people. The gorgeous halo of curls, the shape of his eyes, the freckle on his cheek and those luscious lips. The lone bulb above the back door illuminated him in a yellowish light that shouldn’t have been flattering but I had a feeling Remy would look good with a paper bag on his head. Wait. That didn’t make sense. I furrowed my brow and cocked my head just as Remy set his arm over my shoulder and pulled me forward.

My heart raced when the tips of our noses brushed and our breath commingled visibly in the cool air. With a courage I didn’t know I possessed, I angled my head and slowly touched my lips to his. Just a touch. He had room to pull away. Hell, he even had room to punch me if I got this totally wrong. But when he purred softly and licked the corner of my mouth, I knew we were on the same page.

I cradled the back of his head and gently threaded my fingers through his hair. I held him like he was a fragile flower or something. Then in my typical bull-in-a-china-store style, I plunged my tongue between his lips. Remy gasped at the onslaught but he didn’t miss a beat. He wrapped both of his arms around my neck, drawing me close as he glided his tongue over mine, twirling and sucking feverishly.

I didn’t know how long we made out on that stoop but I could have done it all damn night. He tasted incredible and he felt even better. I loved the way he pressed his chest against mine and those sexy noises he made drove me wild. I wanted more than we were able to do on a cigarette break. Much more.

We broke for air and eyed each other, looking for clues. Or maybe that was just me. I couldn’t be the one in charge of directing traffic here. I was out of my depth. He had to tell me what came next. I’d never figure it out on my own. Remy caressed my cheek and smiled before leaning in to nibble on my bottom lip.

“Okay. I’ll see ya ’round.” My huskier than usual voice didn’t mesh with the casual vibe I was going for.

Remy pulled back with a smirk. “That’s all you’re going to say? “See ya”? Don’t you want my number or something?”

This time when he smiled, I felt it deep inside me. The butterflies in my stomach fluttered like crazy but in a good way. 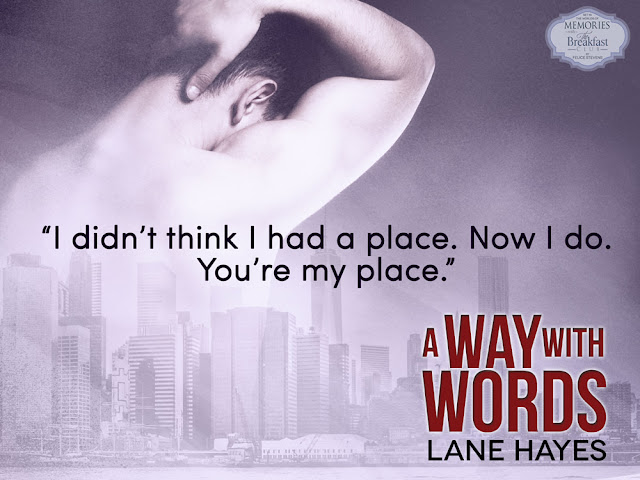 5 out of 5 stars
A Way With Words is a novella that is part of the Kindle Worlds series Memories with The Breakfast Club.

I'm a huge fangirl of this author so it's no surprise I squee'd a bit when I found out she had not one but two offerings out this summer. A Way With Words is the first offering and is a novella featuring two men who are completely different but are absolutely perfect for each other. Bonus is that this novella really gives you a huge amount of story in 6 chapters, so you don't feel like you're missing any of their story.

Tony has been quietly admiring this cute musician who's been playing his guitar in the park for a few months. One day he finally makes eye contact with him and they introduce themselves, the musician flirting with Tony just a bit. Remy, the musician, is relatively new in town and is trying to give his life a new direction. He didn't really expect he'd meet someone like Tony. They strike up a sort of friendship, casual for the most part, because Tony isn't out of the closet. However they continue to grow closer and closer until they're in a relationship. Of course this still doesn't solve the issue of Tony being in the closet to everyone else.

I truly enjoyed this story from start to finish. The author does a fantastic job with these two characters, their story, their growth/change in Tony's case, and adding in secondary characters that are important to the story. She does this all in a ~24K word novella without sacrificing the feel of the developing relationship and how Tony deals with coming out to his family, friends, and co-workers. That is, for this reader, pure reading magic when you can make it all work without sacrificing elements, particularly in this length story.

I definitely can't recommend this story enough as one that you'll want to read, and even pick up and read again and again.

One lucky winner will receive a $10 Amazon Giftcard