The Montgomery Ink Series from NYT Bestselling Author Carrie Ann Ryan continues with the brother who keeps his secret and the one woman he shouldn’t want.

Everly Law married the love of her life and on the eve of giving birth to their twins, lost him in a tragic accident. Now she’s a single mother working overtime at her bookstore trying to make sure her boys have the life they deserve. Her life is busy enough without her adding dating a Montgomery. As past secrets come to light, she’ll need Storm more than ever—even if she doesn’t realize it.

Storm Montgomery has spent his life atoning for sins that only few know he’s committed. When he lost his best friend, he promised his widow that he’d always be there for her—even when she wanted nothing to do with him. But when a single touch ignites passions they’ve both buried deep inside, he’ll have to remember exactly who is in his arms and that taking chances might be far more dangerous than they bargained for.

Get your hands on INKED EXPRESSIONS now:

Inked Expressions is the seventh book in the Montgomery Ink series. I highly suggest reading this series in order for maximum reading pleasure.

Inked Expression continues the series featuring the Denver Montgomery children, and this one features Storm, who is twin brother to Wes. They are the last remaining single members of their family now. The rest have all paired or in Maya's case triad-ed off. Everly has been a part of Storm's life for the last 10 plus years. She was Jackson, Storm's best friend's, girlfriend and then eventually his wife. Over those years, she and Storm became friends as well, until Jackson was killed in a freak accident. Everly started pulling away from Storm because she wanted to stand on her own and not depend on others for help.

There are a lot of parts to this story that sharing the storyline will give away the plot so I'm going to leave this here and talk about the book. Inked Expressions was a solid entry into the series. While I did enjoy this one, it wasn't my favorite, mostly because there was too much 'stuff' going on around Storm and Everly that it felt like their romance was a bit short changed. Now that's not to see that there aren't some really HOT moments between them, there are, but it was a bit zero to full steam ahead once they started dating.

The other thing that I thought was out of character for Storm was his keeping a rather huge secret from his twin, Wes, for almost 20 years. I did love what interaction we saw with Storm and Everly's boys, and his puppy that he is training to work with those with PTSD. Overall the story itself was good it was just bits and pieces that didn't fit what we'd seen previously of Storm.

I will admit I'm anxiously looking forward to Wes's book, which will be the last in the main Montgomery Ink series. I definitely recommend this for fans of the series but this is not a book to dive into if you haven't read any of the previous books.

Who is your Montgomery Ink hero? Take the quiz and find out!

Which Montgomery Ink heroine are you most like? Take the quiz and find out! 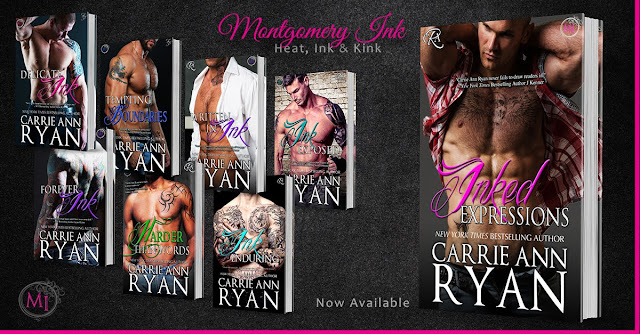