City Boy: Hot Off The Ice #1 by A.E. Wasp - Release Blitz with Excerpts and Giveaway 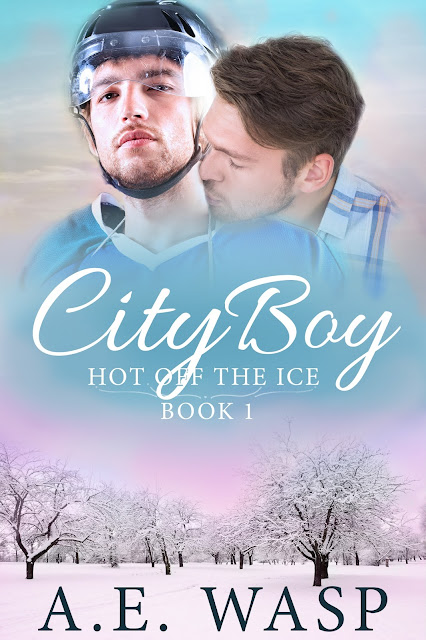 All Bryce Lowery knows how to do is play hockey. He’s been playing professionally since he was fifteen. Twenty years later, he’s rich, famous, tired, and alone. And possibly gay according to his ex-wife.

When a blown tire leads directly to mind-blowing sex with a motorcycle-riding white knight named Dakota, Bryce discovers he is most definitely gay. When his white knight turns out to be the manager of the apple orchard he inherited from some distant relative, he discovers that everything he thought he knew about himself was wrong.

Now Bryce has a tough choice to make, follow the money to a new multimillion dollar contract, or follow his heart into the unknown?

All Dakota Ryan knows how to do is grow apples. Now at twenty-four, he faces losing both his home and his livelihood in one cruel twist of fate.

Then Bryce Lowery crashes into his life like the answer to all Dakota’s prayers. Not only does the gorgeous, older professional athlete have the money to save the orchard, but he’s whispering promises to make all of Dakota’s wildest dreams come true. But Dakota knows better than to give his heart to someone who could leave, and if life has taught him anything, it’s that everyone leaves.

Dakota has a choice, sit back and wait for Bryce to decide his fate, or for the first time in his life, chose what he wants his future to be?

City Boy is a first time gay, fish out of water, May/December love story with a HEA.

Dakota sighed, head dropping down onto Bryce’s chest. “So, how was it for you?” He tilted his head up so he could see Bryce’s face. From this angle, his beard looked fluffy, and Dakota had the urge to scratch him under his chin like a big cat.

He could see Bryce searching for the right words, so he didn’t push. The silence stretched comfortably. Seemed like neither of them was in a hurry to leave this unexpected sanctuary and get back to the real world.

“Well, it’s funny,” Bryce said, running his fingers through Dakota’s hair and cupping the back of Dakota’s head in the palm of his hand. “I’ve never liked this after part before with women. I did it because it’s the right thing to do, but I would always make an excuse to get up as soon as possible. But I really want to keep touching you.”

Bryce smiled down at him, laugh lines crinkling at the edge of his dark brown eyes. “I always wanted it to feel like this.”

Dakota’s heart thudded in his chest. The way Bryce had Dakota tucked up against him felt really good. Scarily good. A part of Dakota’s mind beat its terrified wings against his skull, telling him to get up and leave now. How did this happen? Dakota had a hard time letting his friends get close to him. He certainly didn’t cuddle with strangers.

Dakota had worried that Bryce would somehow imprint on him. Now Dakota wasn’t sure he wanted to let the man go. Not only was Bryce smoking hot, but he was also sweet, considerate, and kind. And, Dakota suspected, had the potential to be fantastic in bed. 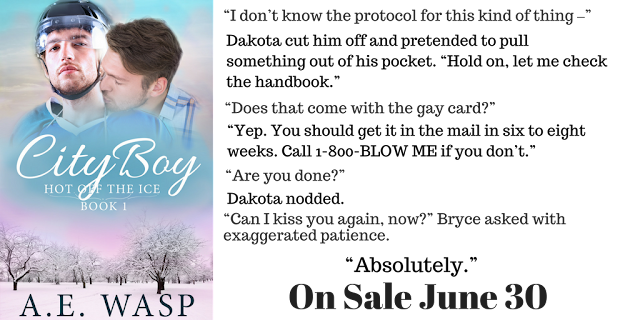 What did Dakota see in Bryce’s eyes? His brows lowered as he seemed to be searching for something. Bryce tried to open up and let his emotions show in his eyes, hoping that one of the was what Dakota needed.

Who had he become in these too-short weeks?

This moment seemed separate from any that come before in Bryce’s life. His universe had narrowed to a rundown VW bus at the backend of an orchard in the shadow of the Rocky Mountain where he sat poised on the edge of understanding something he had no name for.

The energy between them built, the lights and the heady smell of the incense swirling around the air. A slight buzz from the brownie made every movement syrupy-slow and fanned Bryce’s desire.

Somewhere inside Bryce, a damn broke. Everything he had ever wanted to feel, everything he had held back or assumed he lacked, crashed over him, and, with a small ooh he closed his eyes, breaking the connection.

Dakota surged forward, pulling Bryce’s shirt off as he lowered him gently to the mattress. Somehow despite being unwilling to stop kissing each other, they managed to get undressed. 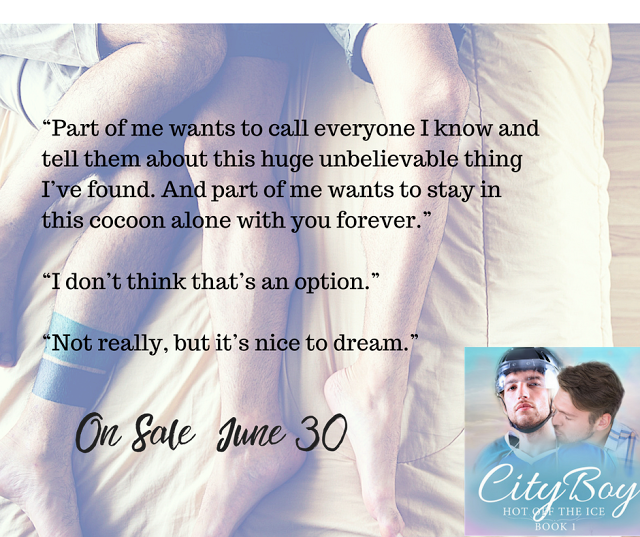 Bryce scratched his fingers through Dakota curls, pulling them and letting them bounce back. “I’ve been to so many amazing places.”

“Yeah. I know.” Dakota yanked his head away with frown.

Bryce didn’t let him go, pulling him back against his side. “No, let me finish. All these places were amazing, but I was always kind of sad. I’ve never been with somebody I—someone who is special to me.”

“What about with Nikki?”

“Except for our honeymoon, I never went anyplace romantic alone with Nikki,” he confessed. “Even the honeymoon was awkward.”

Dakota turned on his side and slid his leg over Bryce’s leg. “How? Were you a virgin?” Dakota asked lightly.

Bryce brushed off the joking tone in his voice and answered seriously. “No. Worse. All the things that were supposed to be romantic? I just wasn’t feeling it. I didn’t feel lost in her eyes in the candlelight or anything. I didn’t want to spend hours in bed.”

He ran his hand up and down Dakota’s arm, enjoying the soft tickle of his hair and the firmness of the muscle. “I convinced myself that nobody felt that way; that everyone was faking it because that’s how we were told it’s supposed to feel when you’re in love.”

“And now?” Dakota tensed in his arms.

Bryce pushed up and rolled until he hovered over Dakota, looking him right in his eyes. Dakota was going to listen to him whether he wanted to or not.

“Now, I want to take you down to Mexico, get a cabana on a private beach, one with a giant bed and an outdoor shower. The I’d drag you inside and not come out for two weeks. I want people to bring us coconuts and fresh fish and tequila and leave it at our door.”

Dakota stared back at him, hands on Bryce’s hips. His fingers adding more bruises to the marks he’d already left on Bryce’s skin. “You could do that, couldn’t you?”

“In a heartbeat.” And he wanted to, so badly. Badly enough to give up hockey? If he only had himself to worry about? In a heartbeat.

One winner will receive a Kindle Fire, PLUS 20 ebooks, one donated by each of the participating authors.

After time spent raising children, earning several college degrees, and traveling the world with the U.S. State Department, she is returning to her first love - writing.
A dreamer and an idealist, Amy writes about people finding connection in a world that can seem lonely and magic in a world that can seem all too mundane. She invites readers into her characters’ lives and worlds when they are their most vulnerable, their most human, living with the same hopes and fears we all have. An avid traveler who has lived in big cities and small towns in four different continents, Amy has found that time and distance are no barriers to love. She invites her readers to reach out and share how her characters have touched their lives or how the found families they have gathered around them have shaped their worlds.
Born on Long Island, NY, Amy has lived in Los Angeles, London, and Bangkok. She currently lives in Colorado in a town suspiciously like the ones in her books. 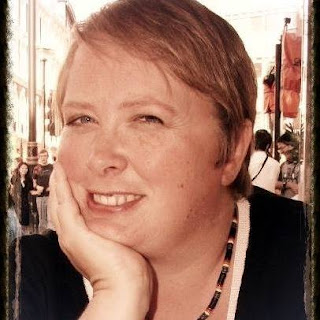