Caleb White has been a lot of places and made a lot of decisions he isn’t proud of. He’s ready to settle down and figure out who he really is. Where better to do that than Last Chance, the home he was ripped away from at sixteen? A fresh start is in order, but he has no idea how the hell to do that when he’s not even sure what he wants in the first place.

Ryan Daily is a pro at hiding his insecurities. He’s never fit in and has spent most of his life knowing there’s something missing. Just when he thought he’d found it, his whole world fell apart and he lost everything.

Then comes a sleepless night in a twenty-four-hour café, where Caleb and Ryan forge a connection full of laughs, junk food, and whispered secrets. In the middle of a budding friendship, they see the blossoming of desire neither of them expected. Ryan has kept his heart protected after having it shattered, and Caleb—no stranger to attraction—finds what he has with Ryan is on a whole new level from anything he’s experienced before. In a world of black and white, they bring each other color.

But life is never simple. When the past comes knocking, Ryan and Caleb will have to reach through the darkness to find the light they see in each other or risk slipping into the shadows for good. 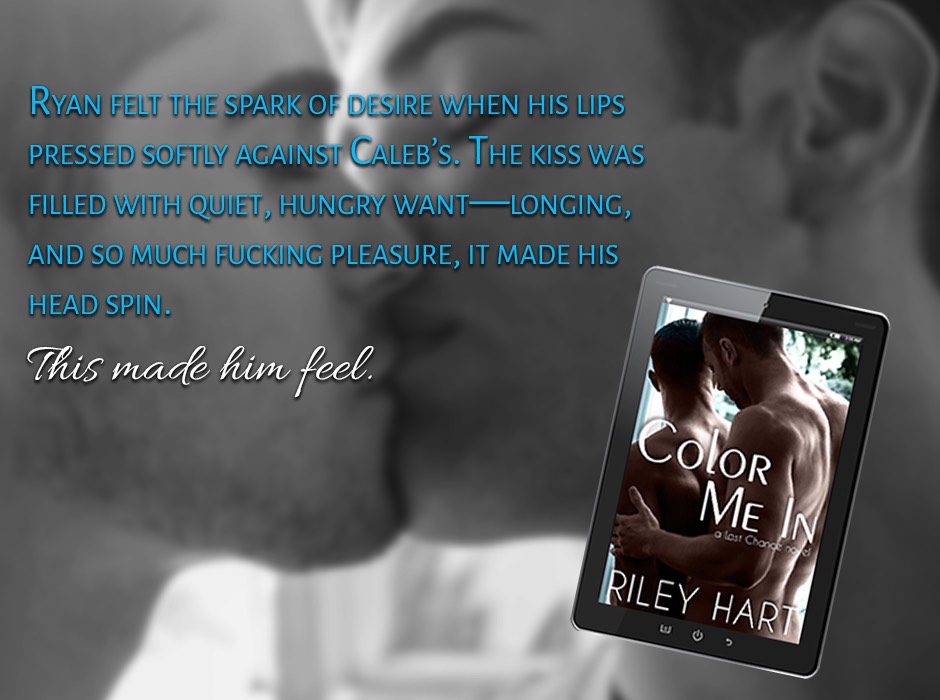 At eleven forty-five, he made his way downstairs to see that Ryan was already there waiting for him. They were supposed to be at Shane’s around noon. “We taking my car? I’m not sure I can be seen in yours. I have a reputation to uphold.” Caleb watched, waiting for Ryan to react to his ribbing.

He did, looking up at Caleb through a fan of his dark lashes as Caleb stood on the stairs. Jesus, he was sexy as hell. His hair was messy, which Caleb fucking loved. He wore jeans—not the ones Caleb said he liked—and a button-up black shirt with long sleeves.

He looked so damn innocent, unsure, as he gave Caleb a playful grin and rolled his eyes. “Not flashy enough for ya, huh? The car doesn’t make the man, Salt Fiend.”

The silly nickname sat warm in his chest. “Oh, fuck you.” Caleb reached the bottom step. “I know what kind of man I am, thank you very much. Grab your keys. You can drive. I didn’t want to anyway. Might even take a short nap on the way home—my belly will be so full and all.”

“Well, shit.” Ryan followed behind him. “I didn’t think this through. Do I get a take-back?”

“Nope.” Caleb grabbed his jacket from the chair, then reached for Ryan’s, handing it over.

“Thanks.” His eyes darted away, looking almost bashful. “We need a coatrack.”

They’d managed to break through the first layer of tension; Caleb could feel it. Unfortunately, the bastard seemed fucking thick, and he thought they still had a way to go. “We do.”

Ryan felt his pockets, Caleb assumed, for his keys. His guess was confirmed when he pulled them out and said, “We should be on our way.”

They made it almost to the door before his stupid fucking mouth got in the way. “You look good, by the way.”

Ryan stumbled. Caleb reached out and wrapped his hand around Ryan’s bicep. “No need to get all flustered, Sweet Tooth.”

“Not even a little?” Caleb asked.

He had a feeling that was the case. “I’ll give you space. We’re good, though? You and me? I didn’t fuck up?”

“No.” Ryan reached out then and fixed Caleb’s hood, which had accidentally gotten tucked into the back of his jacket. “You didn’t fuck up. We’re good.”

Caleb nodded. That was exactly what he needed to hear.

Color Me In is the second book in Riley Hart's Last Chance series. While it could be read as a standalone, I'd recommend reading the series in order, mostly because the characters are introduced in the first book.

Color Me In was, for this reader, Riley Hart at her best. We have two men who struggle with feeling flawed/imperfect but to the outside world look put together and focused. Caleb comes back home to Last Chance to reconnect with Shane, who was his best friend as a teen. After his parents left town and moved across the country to isolate him because they didn't want him to be gay. Caleb has lived a lot of life and made some mistakes along the way, now he's wanting a new start in a familiar place. He never expected to meet Ryan one night as they both suffered from insomnia at the small town diner. Two totally different men who connected over french fries, coffee, and bakery goods. Oh..and the same car, just in different colors...which becomes a bit of a running joke between them. Along with their Salt Fiend and Sweet Tooth nicknames.

Ryan lives a pretty normal life, working at Shane's garage and living in Last Chance. Mostly happy, he's getting over his own personal tragedy, which you'll eventually learn about. The longer he hangs out with Caleb though, the more he questions who he is because he's never quite fit the 'right' place in life. This is another thing you'll learn about as you read the story, and I feel that it's a bit spoilery to share his full story. It really needs to be read and 'seen' from Ryan's perspective as he talks about everything.

Obviously from the blurb Ryan and Caleb are the MCs of the story and work toward a relationship throughout the book. The path they take is uniquely their own, which is one of the major draws in this story for me. They're not a traditional couple and it is a lot of slow burn build up as they become close friends and begin to  expand their horizons, so to speak. I kind of loved Caleb's no nonsense attitude and how much he needs to find that connection both with Shane and Ryan. Ryan, was completely sweet and slightly adorable in his own discovery of self. These two truly made the storyline pop.

While this is a truly slow burn story, I really enjoyed it because it gave them a solid background and time to explore more than just sex and diving into a relationship. Their situation required that they build a strong foundation first and then move forward at the best pace for them. Yes, I'm being cryptic but it's their story to tell.. I'm just the person telling you that you NEED to read this book because Caleb and Ryan are an awesome couple in a well written story.

So, yes, I'm telling you go out and buy this one, you won't be disappointed...well at least I don't think you will be. Make sure to check out the first book in this series Depth of Field, featuring Shane and Van's story, who you'll also see quite often in Color Me In.

Riley Hart is the girl who wears her heart on her sleeve. She’s a hopeless romantic, a lover of sexy stories, passionate men, and writing about all the trouble they can get into together.
She loves reading, flawed characters, and hanging out with her husband and children, who she adores. She and her family live in Southern California, soaking up the sunshine while also missing seasons. Not a day goes by that she isn’t thankful she gets to wake up and do what she loves.
Life is good. Riley also writes young adult and new adult under the name Nyrae Dawn.