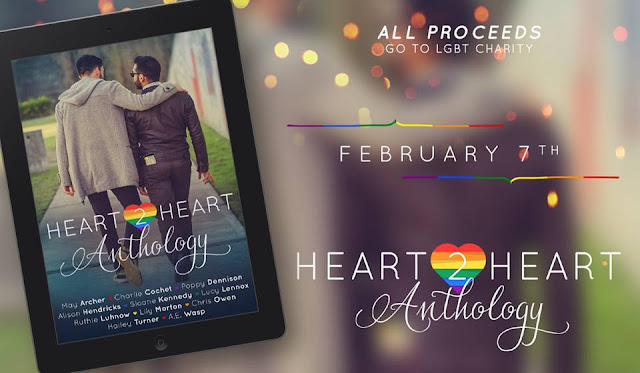 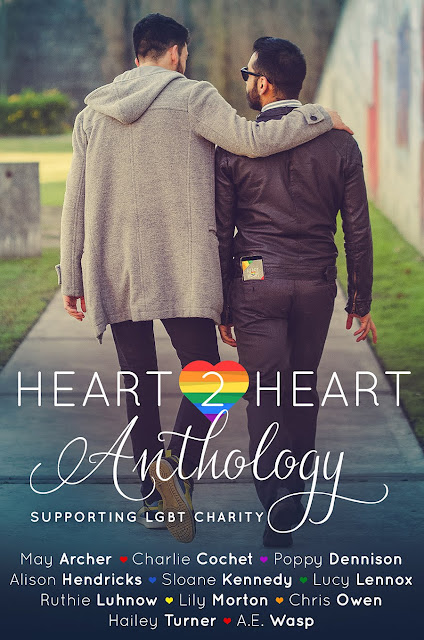 Once upon a time, a bunch of authors wondered… What if a dating app that guaranteed you a love match broke down just in time for Valentine’s Day? What if you found yourself on a blind date with a random guy who might be your opposite in every single way? It could be a disaster. Or… When the code breaks down, fate just might take over.

Eleven of your favorite gay romance authors have joined forces to light up your Valentine’s Day with a collection of sweet, sexy, silly, and hot short stories, featuring a wacky cast of characters chosen from your reader suggestions! Morticians and magicians, superheroes and spies, lawyers and lobstermen, will all learn that love has nothing to do with algorithms… and sometimes you find it in the least-likely places.

And the best part? All proceeds from this collection will go to the authors’ favorite LGBTQ charities, to ensure that love in all its incarnations will be celebrated and protected every single day of the year!

It will only be available for 90 days, so Tuesday, May 8th will be the last time you can purchase this anthology.

We are pleased to be donating 100% of our proceeds to 3 wonderful charities:
The Trevor Project: https://www.thetrevorproject.org/
Bisexual Resource Centre: http://biresource.org/
One n Ten: http://onenten.org/

We encourage all readers to learn more about these groups and consider making a donation of your own. Every little bit helps. 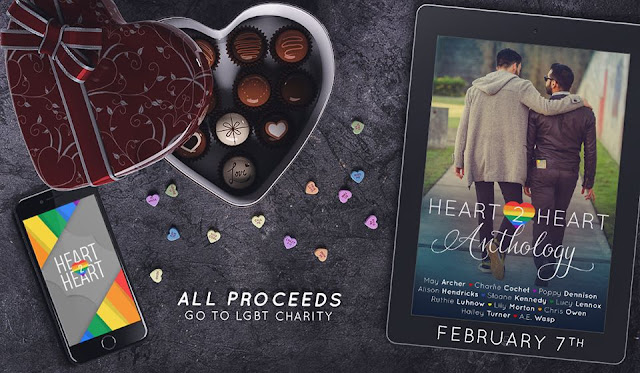 How Bailey the geeky programmer lost his focus

It was like a scene out of a soda commercial. All of the women (and a few of the men) in the office gathered around and drooled over the sexy eye candy hanging onto the side of the damned building as if the guy was nothing but a sex object.
Fuck, he’s a hot sex object, Bailey thought. I’d like to sex object the hell outta that beefcake.
Bailey himself had been watching the guy for two days now. At first, he assumed the man on the scaffold was a window washer. It was the obvious explanation. Otherwise, why would a man—a beefy, hot, muscled man, ahem—be riding a hanging scaffold on the fifteenth floor of the office building?
But how long, exactly, does it take to wash a few windows? He’d been right outside of Bailey’s cubicle window for two straight days.
Bailey shook his head and tried to focus on his job, ignoring all of the lookie-loos in the space behind his cubicle. He was finalizing the algorithms to be used in Heart2Heart’s new matchmaking software, and it was critical he got the matchmaking algorithms just right in order for the product launch to be a success. He needed to pay attention to what he was doing.
A lot was riding on the Heart2Heart launch. Their big marketing campaign promised love matches just in time for Valentine’s Day, and in order for the actual matches to work, Bailey had to create pristine code that took all of the variables into consideration. He was almost done with the programming. Just cleaning up a few final glitches and he’d be over the last of the hurdles. His plan was to stay late to double-check everything that evening before the software went live after midnight.
His eyes slid over to his cubicle window again and caught sight of thick, tanned forearms flexing above huge, strong man hands. The late afternoon Miami sun shined against the guy’s skin, showing a light sheen of sweat from his work doing… something.
Ungh. You can do something… to me. Get sweaty… with me, Bailey mused, chewing on the end of his pen. He saw one of the man’s large hands grab a screwdriver out of his tool belt. Maybe he’s screwing… something.
The window man looked like he needed to be licked. Like, a lot.
Bailey didn’t realize his elbow had rested on the spacebar while he drooled out the window until he heard an angry series of beeps from his computer.
“Fuck. Shit,” he stammered, focusing again on his monitor and correcting his lapse.
A few minutes later, he heard a thud coming from the window. With his heart racing in fear of something happening to the poor man on the scaffold, Bailey snapped his eyes to the large pane of glass.
The sexy stack of muscles grinned at him and held up a piece of paper.
With a phone number on it.
The hot guy gestured to his cell phone and pointed at Bailey with a flirty grin.
Bailey looked behind him before turning back and pointing at his own chest. Me?
The beefcake nodded and put his finger and thumb up to his ear in the universal gesture of call me.
With trembling hands, Bailey dialed his phone, never taking his eyes off the window man while the man answered his own phone.
“How long do I have to pretend to wash this one window before you notice me?” Window Man asked in a deep, sexy voice.
“Who me?” Bailey squeaked in response.
“Yeah, you,” he said pointing to Bailey through the window and winking at him. The wink tightened Bailey’s pants in an instant.
“Um… I noticed you about two days ago…” Bailey admitted. “Can I help you with something?”
“Yeah. I can’t get your adorable nerdy self outta my head. Please god, tell me you’re gay or bi or something.”
Bailey’s face turned fuchsia and he squeaked again. “Gay. Mm-hm. Yeah. Gay.”
“What’s your name, gorgeous?”
“Bailey.”
“Well, Bailey, I’d love to take you to dinner tonight. Are you free?”
“Uh huh,” Bailey stammered. “Sure. Of course. Yes.”
“I get off work right now. Any chance you’re ready to pack up and get outta here?”
Bailey stood up from his chair quickly enough to knock his keyboard to the floor.
The Heart2Heart matchmaking algorithms would be just fine without a final round of testing.
Probably. 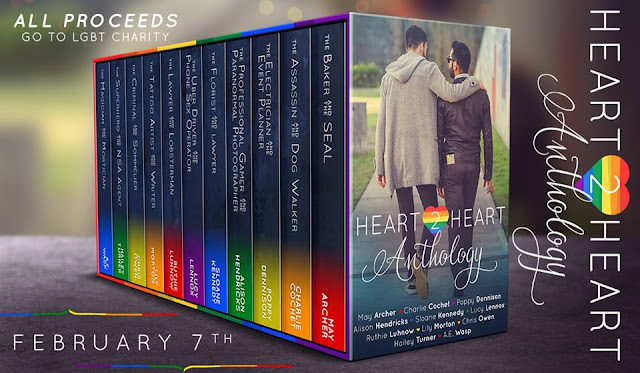 What began as a random idea quickly turned into a collaborative and completely voluntary effort from 11 authors, more than 130 readers, cover designer, 2 proofreaders, and one cat herder to keep it all together.

Readers were asked to submit ideas for characters, both typical and off-the-wall, and from that list, each author picked 2 seemingly mismatched guys and helped them find love.

May Archer - The Baker and the SEAL

Charlie Cochet - The Assassin and the Dog Walker

Poppy Dennison - The Electrician and the Event Planner

Alison Hendricks  - The Professional Gamer and the Paranormal Photographer

Sloane Kennedy - The Florist and the Lawyer

Lucy Lennox - The Uber Drive and the Phone Sex Operator

Ruthie Luhnow - The Lawyer and the Lobsterman

Lily Morton  - The Tattoo Artist and the Writer

Chris Owen - The Criminal and the Sommelier

Hailey Turner - The Superhero and the NSA Agent

AE Wasp - The Magician and the Mortician