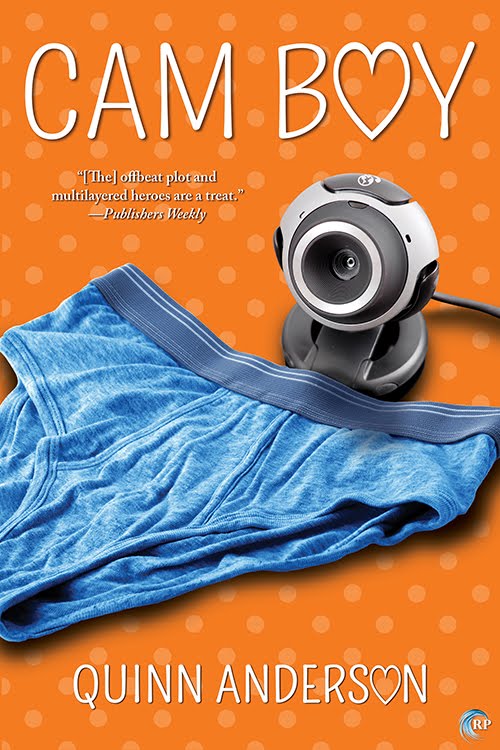 Thanks for joining me on my book tour! I’m Quinn Anderson, author of On Solid Ground and All of the Above. I’m here to share some inside information about Cam Boy, coming out on February 12th, my 28th birthday! Stay tuned to hear about the friend who inspired this novel, fun facts, and more about the characters. Leave comments on the tour posts for a chance to win a $10 Riptide Publishing gift card!

Their chemistry is undeniable, but he knows better than to mix business with pleasure.

Mike Harwood is a loud-and-proud professional adult entertainer. In the past three years, he’s starred in dozens of films, and he’s very good at what he does. But as focused as he’s been on work, he’s neglected everything else, including his love life. He’s so used to faking attraction, he can no longer tell when something real is staring him in the face. 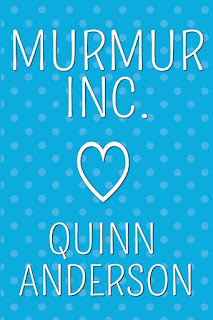 There’s no shortage of talent wandering Murmur Inc’s halls, and oddly enough, no shortage of romance simmering behind the scenes. Murmur Inc. takes mixing business with pleasure to new levels. Want an inside look at the personal lives of Murmur Inc’s hottest stars? No subscription necessary.

Cam Boy is an extremely light, funny, and fun novel, but it also deals with some major stigmas. Obviously, the entirety of the Murmur Inc. series has touched on discrimination faced by sex workers, both within the industry and elsewhere. But Cam Boy took that one step further by talking about one of the biggest taboos associated with sex work: Sexually Transmitted Infections.

In some places, I use the term STIs in my story instead of STDs because it’s more accurate. Not all STIs become diseases, or can be classified as such, so it’s a broader term that’s becoming more widely used. The difference is pretty simple: AIDS is an STD because it’s a disease, but HIV is an STI because it’s not.

In my research for this novel, two things became abundantly clear for me: one, there’s a lot people don’t know about STIs, and two, people sometimes like to pretend like they don’t exist, which doesn’t help anyone understand them better.

In my book, it was important for me to tackle this subject with realism but also without stigma. Obviously, in the fantasy context of my story, my characters could only contract an STI or STD if I wrote it, so there’s a level of safety there, but I wanted to include frank conversations about the risks that didn’t make it seem like STIs are an inevitable part of being a sex worker and/or being gay.

I also wanted to make it clear that medical science has come so far. It’s realistic to freak out when you think you might have encountered an STI, but they’re also not the death sentence they were back in the eighties. It was important for me to have my characters think to themselves, ‘Okay, so if I do have an STI, it’s not the end of the world. I can lead a healthy, long life, and this won’t mean no one will ever love me.’

Instrumental to this narrative were several friends of mine who are living with HIV, herpes, and other STIs. They helped me understand how ridiculous and outdated the stigma is, and how surprisingly often it appears. Even saying you’re “clean” instead of “negative” demonstrates a bias against people with STIs.

In short, I did my best to take a serious subject and unpack it in a fun and respectful way. When people read my books, I want them to be entertained, but I also want to impart something deeper. With this book, I think the social commentary works to add realism and show what sort of people my characters are, especially in terms of how they react to stress.

To celebrate the release of Cam Boy, one lucky winner will receive a $10 Riptide credit! Leave a comment with your contact info to enter the contest. Entries close at midnight, Eastern time, on February 17, 2017. Contest is NOT restricted to U.S. entries. Thanks for following the tour, and don’t forget to leave your contact info!