Curl Around My Heart by Londra Lane - Release Blitz with Excerpt 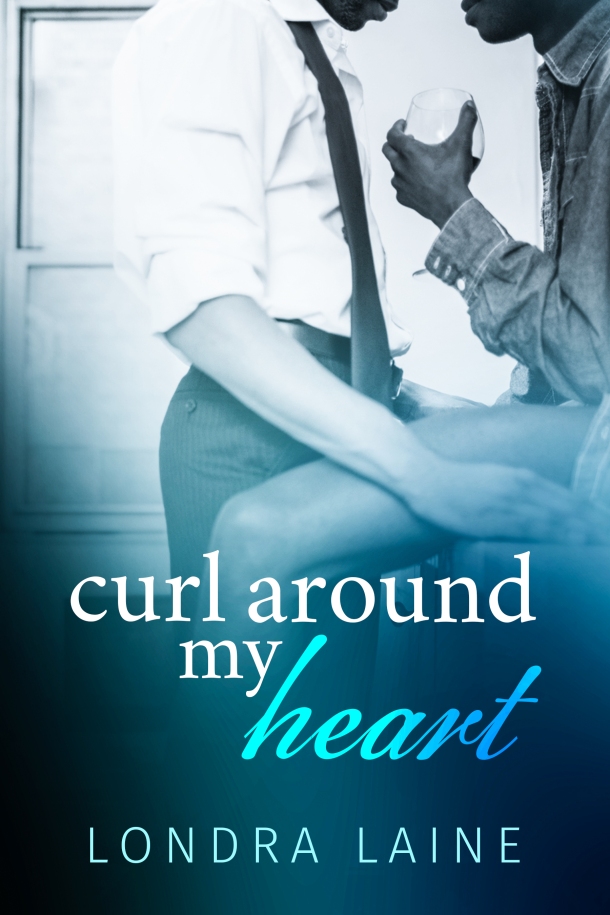 Title: Curl Around My Heart

At Pearl’s Hair and Nails, no one questions Tate Robinson about his high heels, crop tops, and lipstick, because he’s the boss and he can wear what he damn well pleases. The shop is his life, and he doesn’t need anything more. Until a man walks in with his adorable daughter, and Tate has to untangle her helmet-hair...and his growing feelings for the single dad.

Reece Evans has been on his job for years, has his own place, and now has custody of his eight-year-old daughter. But he doesn’t trust himself to avoid screwing up. Adulting is not his strong suit—or so he’s been told.And now a sexy beautician, who also happens to be his new downstairs neighbor, has Reece wanting and reaching for more than he thinks he’s capable of.

As Tate and Reece move past their own fears about relationships, Reece’s ex issues a threat that could destroy everything. Will Reece’s worries about other people judging him undermine his budding romance? And will Tate’s fear of rejection make him push Reece away? Or have the sweet single dad and his precocious daughter curled too tightly around his heart to give them up?

***Please be aware that this book contains references to drug addiction*** 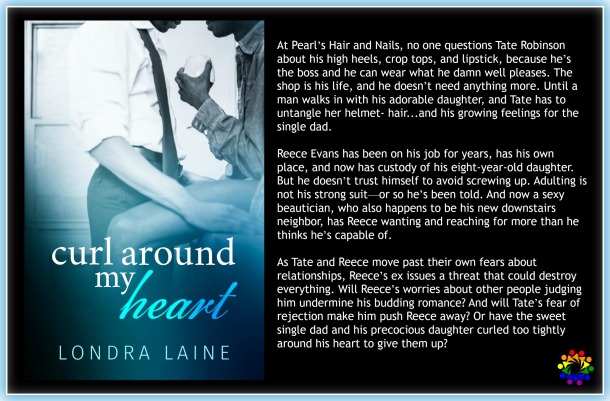 Eventually they eased away from each other, their lips pressing briefly against a cheek, an eyelid, the corner of a mouth, until their foreheads were touching as they shared slightly labored breaths.

“I like you, Tate.” The words spilled from Reece as though Tate had wrung them from him. Tate pulled back, forcing Reece to disentangle their legs. Tate was in profile to Reece now, his head dropped against the back of the couch. His stomach seized and his confidence drained, waiting to hear Tate’s response.

“I like you too, Reece,” the other man mumbled.

Reece sighed in relief as Tate shifted to meet his gaze.

“I’m crazy attracted to you. Obviously. But, I’m just nervous because guys like you⎯”

Tate closed his eyes briefly then opened them. “Yeah. Guys like you. Stereotypically male. Not so obviously queer. Well, they’ve been attracted to me, dated me. But inevitably break things off, because they think I’m too femme. Too flamboyant.” Tate’s shine flickered, and a well of heat raced up Reece’s chest.

“Well, fuck those dudes,” Reece said, throwing himself back on the couch. “And don’t ever compare me to them. I see you, Tate.” He turned his head and waited until Tate met his gaze. “I like what I see. All of it. All of you. You look good to me in heels,kicks, tight-ass ladies’ jeans, and sweats too. I just like you, man.” He ended his little tirade on a shaky breath and then leaned over to brush his lips against Tate’s.

As he went to pull back, Tate trapped Reece against him, gliding his tongue across the seam of Reece’s lips, coaxing Reece to open then luring him into an urgent kiss. Their lips and noses smashed, teeth bit and clacked as they clutched at each other before Tate pulled back abruptly.

“What am I doing?” Tate whispered, resting his head against Reece’s. “You have a kid. You’re my client. My neighbor.” He pulled back, his face serious, eyes searching Reece’s. “And I like to top. Mostly. Like seventy-thirty.” Tate lifted his chin as though waiting for Reece to object.

Reece just smiled, his dick twitching at the thought of Tate topping him, bending him over the couch and making him wail. He brushed his lips against Tate’s. “Well, lucky for both of us then that I like to bottom, mostly. I’d say about sixty-forty. I figure we can meet somewhere in the middle. As far as the other stuff goes... What? You discriminating against me?”

Tate shook his head. “No, it’s just that I’ve been here before, okay. With the straight guys, the bi guys, even the gay ones, and most of them just wanted to fuck and didn’t even want to take me out on a date because I was too effeminate for them.” Tate waved his hand. “Too whatever, too...me, and I just...” He trailed off.

“You expect me to be like them,” Reece finished.

Tate groaned then covered his face briefly. “No, okay? Maybe. Ugh. It’s hard not to expect this to be the same, you know?” Tate grimaced.

Disappointment surged through Reece but then quickly dissipated. Tate didn’tthink Reece would personally fuckup whatever this was that was starting between them. No, this had nothing to do with Reece. Tate had been burned, and Reece could relate.He couldn’t make any promises about the outcome of their budding whatever it was, but he damn sure wanted to try. He didn’t want to be to Tate what all the other men who’d come before had been.

Reece grabbed Tate’s hand, turning to face the man. “Well, how about we do the unexpected? Can I take you out next Friday after work?” Reece held his breath.

A forever-man for every man

Londra has loved to read since she discovered The Baby-Sitters Club. As a child, her parents would ground her by taking all the books out of her room for several days. Londra began reading romance in 2008 and fell in love with the M/M romance genre after purchasing a book by accident several years later.

After decades of daydreaming, and jotting down story ideas, Londra decided to give life to the characters in her head. She writes to give her guys the happy ending she wishes everyone––no matter their race, religion, gender, or orientation––could experience in real life.

During the day, Londra is a communications manager for a consulting firm. She is a recovering journalist. Londra loves the New York Yankees, Seinfeld reruns, tacos, and Friday nights on the couch with wine and a new book.

In 2010, she moved from her native California to New York City where she lived in Harlem for nearly eight years. In early 2018 she relocated to Seattle with her husband 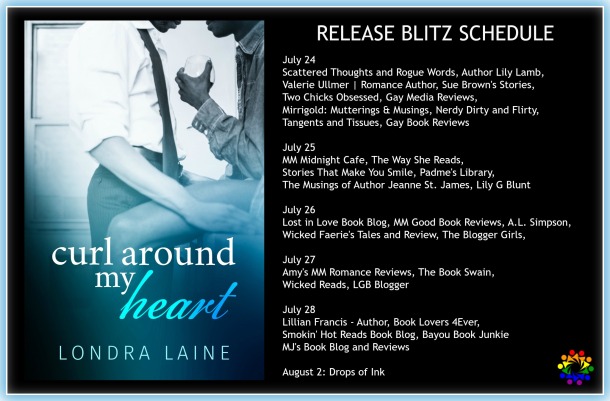