Nectar and Ambrosia by E.M. Hamill - Release Blitz with Excerpt and Giveaway 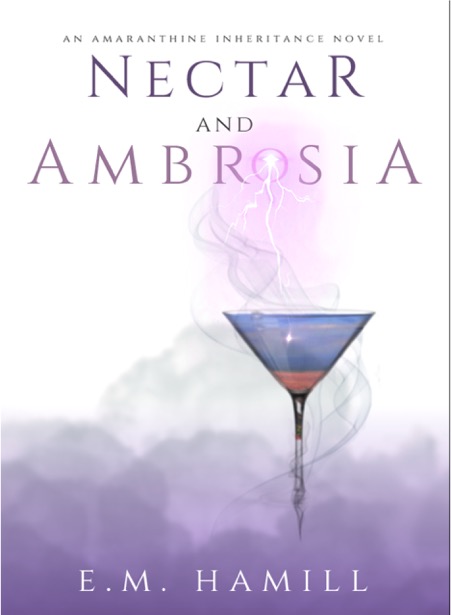 Callie, a Classics major, flees home to protect her family from a monster straight out of mythology.  Visions lead her to Nectar and Ambrosia: the weirdest pub on Earth, where inter-dimensional travelers with attention seeking issues get drunk in between the A-list celebrity lives they create. They can't pretend to be gods anymore—not since a treaty with the current Supreme Deity promising they won't intervene in human affairs.

The Doorkeeper of this threshold, Florian, rides herd on the rowdy Amaranthine and offers her shelter and a job. Callie likes the lonely, mysterious bartender more than she should. For Florian, her presence is a ray of light in the gray monotony of his sentence behind the bar, but he keeps a cautious distance—the truth of how he became Doorkeeper could change Callie's perception of him forever.

When angels show up for a war council over Zeus's irrational mutters about a comeback, Callie has uncontrolled visions of an apocalypse.  Ex-gods realize she’s the first Oracle Priestess in generations. All Callie wanted was keep her parents safe, and now it seems she must sacrifice her future to keep the rest of humanity safe, too. Ambrosia could be the key to harnessing her visions— or it could cost her life.

War is coming. The threshold between worlds has never been more fragile. Callie must discover who is pulling Zeus's strings and avert the final battle—before the immortal vying to become the next Supreme Deity kills her first.

Callie turned away, trying to decide if Florian and all his clientele were delusional or if it was some kind of big role-playing game for rich people. Folks could have a thing about dressing up in furry animal costumes. She supposed they could pretend to be gods and goddesses too. If it was a mythology RPG, they weren't concerned with the classical part, except for the guy she saw yesterday afternoon. She was relieved to have a rational explanation for the horns.

Something moved outside the glass front door. Her heart seized in momentary panic. What if the monster still lurked out there?

Strange, visible turbulence seemed to ripple the panes. Callie squeezed her eyes shut to clear her sight and prayed it wasn’t the aura of an oncoming seizure. Cool relief extinguished the rising sparks of panic as the effect dissipated.

The door opened and revealed a spiky-haired, punk rock kid years too young to be in any bar. Callie was forced to squint in order see him clearly as he strode in, his outlines strangely blurred and soft. Sullen teenaged fluidity rolled in every line of his body. He surveyed the bar, narrow kohl-ringed eyes settling on the heavily intoxicated Zeus. A sneer comprised of equal parts contempt and satisfaction flickered over his mouth.

"There he is, the great king of the gods," he muttered. He moved toward the bar, a glare of disdain sweeping over the other patrons. His eyes widened in appreciation as they passed over Callie, a little smirk growing as his gaze lingered too long on the front of her college t-shirt.

Despite her confusion on how he'd arrived, she gave him a thin smile and a cool nod, crossing her arms over her chest. He stopped short, an expression of shock on his face. Then a quick, sunny grin took over. His blurry outlines sharpened as he drew closer and she relaxed her squinted eyes, no longer struggling to focus on him. She decided it was a trick of the neon-tinted lights hanging in garish advertisement on the walls of the bar.

"My, my, my. Who have we here?" His voice, thick with Cockney vowels, dipped to an intimate tone as he approached. His body language changed to something more unsettlingly mature. He was older than he appeared. "Who do you belong to?"

"I'm Callie. I don't belong to anybody, but I work for Florian," she corrected him politely. "Can I get you something?"

"Well, for starters, tequila." He smirked suggestively. "And your undivided attention."

Callie resisted the urge to roll her eyes. No matter where she worked, the pickup lines were the same.

"I'm sorry, I'm busy working. I'll ask Florian for your tequila. On the rocks, or a shot?"

"You are new here, aren’t you?" He flipped two fingers out, a driver’s license between them.  She took it. No stranger to fake ID’s, this one appeared to be real, and passed him as twenty-one. Still...

He captured Callie's fingers as she returned the license and kissed the back of her hand in old-fashioned courtliness, sea-colored eyes glinting in mischief. An odd, visceral twinge from her early warning system made her startle as his lips touched her skin. Goose bumps flecked her arms. A totally alien sensation overwhelmed her senses: it was as if something crawled off her skin toward his mouth. She shivered in response and tried to pull her hand away. His grin widened as he tightened his grip, apparently delighted by her discomfiture.

"Oh, ho. That’s a lovely surprise. Don't mind me. I'm incorrigible. Call me Puck." He scribed an expansive circular gesture with his free hand. "Welcome to the watering hole of the damned bored."

Callie forced a smile. "Thank you. Now, if you'll let go of my hand, I'll get your drink."

Puck made a mocking bow over her hand and released it, smirking again as he backed away, still admiring her in undisguised interest. Between them, a well-dressed man stepped directly into Callie's path. He swerved with a graceful spin and apologized as Callie’s sneakers squeaked to an abrupt halt on the concrete floor.

"Herm!" came a shouted group greeting from the room at large.

"And fairies," the man belatedly added, nodding at the punk rocker.

Puck offered him an extended middle finger and a dangerous smile. Callie’s mouth fell open, recognizing the Armani-suited guy from the previous afternoon.

"Jeeze, homophobic much?" she muttered.

"Trust me love, I am all fairy and he is far from homophobic. Sexual orientation has nothing to do with him being a prick." Puck glared at the man’s back with undisguised hatred before another lightning-quick mood change and a devilish grin took over. "Make that tequila a double." He winked at her, eyes making another head to toe rake of her body before he disappeared into the clump of huge Scandinavian-looking, Corona-swilling dart players.

Callie's hair still prickled on the back of her neck even after Puck left, and she rubbed it, troubled. She turned back to the room, stopped short, and stared. More customers sat at tables and in the shadows of the booths, each group just a little stranger than the last. None of them used the door.

And the Armani guy—he’d stepped into her path. Right out of the air.

Something intensely freaky was happening that she couldn’t rationalize away, no matter how hard she tried.

Was Florian telling the truth?

Instead of fear, a deep, visceral excitement flip-flopped in her abdomen, butterflies on steroids.

She never pinpointed exactly when wonder began to crowd out her reservations. Rushing between the cooler and the tables, she caught snatches of conversation and shouted greetings when others appeared. Having to bite back questions when she delivered their beverages replaced the urge to roll her eyes. She fought to keep a professional demeanor rather than fangirl all over herself when Florian introduced the Armani guy to her as Hermes. Hermes! One of her favorite characters in Greek mythology.

Three hours into the shift, she took a quick bathroom break. Her back against the door, Callie put her hands over her mouth and muffled something that sounded suspiciously like a shriek. Whether it was fear or excitement, she couldn’t quite say. Her breath came fast and short until she got dizzy. She spun the tap on the sink and the shock of cold water on her face helped bring her back down.

"What the hell, Callie? Are you really going to believe this?" she muttered to herself in the mirror. She grabbed a paper towel to blot the moisture away and waded back out into the crowded bar. 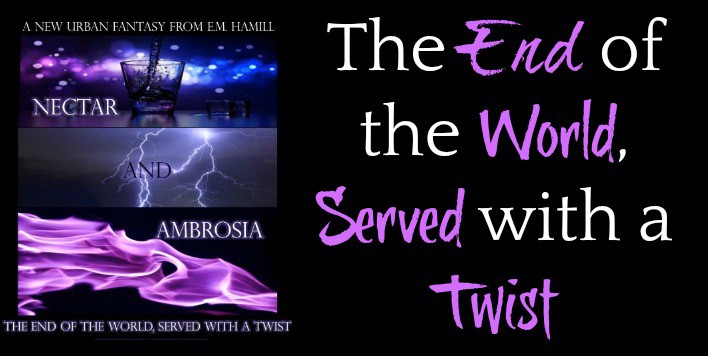 Elisabeth "E.M." Hamill is a nurse by day, unabashed geek, chocoholic, sci fi and fantasy novelist by nights, weekends, and wherever she can steal quality time with her laptop. She lives with her family, a dog, and a cat in the wilds of eastern suburban Kansas, where they fend off flying monkey attacks and prep for the zombie apocalypse.