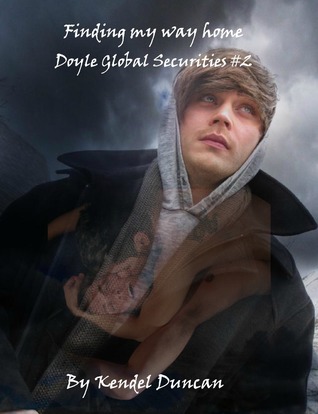 It is the second book in the series but can be read as a standalone.

“Have you ever been so lost that you couldn’t remember what home looked like, what it felt like?

So lost that home was a distant memory – a place that you never had hope of finding it again?

That’s how I felt, how I’d felt for years, for longer than I could remember.

Until I found you, Bas.

I just wish I could tell you that….


For longer than he could remember Tenley ‘Ten’ Pinkerton had been lost. Wandering this earth with no hope, no soul, no heart, no purpose. The day the love of his life, Sawyer, had been brutally murdered was the day that everything beyond the basic elements of survival - like breathing and a beating heart - had been shut down.

Somehow the man had wormed his way past Ten’s defenses, past the armor plates surrounding his heart, past the pain. Somehow he’d gotten inside.

Ten wasn’t really sure how he felt about that.

But the day that Bas went missing?

Ten knew that he would die if he that’s what it came to in order to find Bas, in order to save him.

The question that remained:

Ten followed Morgan back out to his car. They were both completely silent for the twenty-minute drive to what looked to Ten like an abandoned warehouse complex. But when they got closer Ten could see the tell-tale signs that this was a secret government facility: the electronic laser fencing, the high-tech motion sensors.

“I have a feeling we’re not in Kansas anymore, Dorothy,” Ten said quietly.

He looked over to find Morgan smiling slightly even though every other part of his body was tense, “You would be correct scarecrow.”

As he turned into a weed covered parking lot, he slowed by what looked like a large rhododendron. As he rolled his window down, Ten mumbled, “Tin man.”

“What?” Morgan said as he looked back at Ten.

“I would be the Tin man in that scenario. No heart, remember?”

“Oh,” Morgan said as he leaned out to move a large branch to the side revealing an electronic keypad with a fingerprint scanner below it, “You’re full of shit,” he mumbled as he punched in a code and pressed his thumb to the scanner. There was a barely imperceptible beep, the circle around the fingerprint turned green and then Morgan let his foot off the brake.

“That’s it?” Ten said as he looked out the windows, “All it does is beep? How do you know you’ve been given clearance?”

“Because nobody is shooting at us. And you’re still full of shit.”

“About the shooting or the shit?” Morgan said with a smirk.

“You have the biggest heart of anyone I know. You just choose to have it locked down tight.”

Morgan could pretty much hear the silent huff that Ten made as he glared at him. “Stop trying to fix me, Morg. It’s not possible.”

“And yet here you are ready to do anything and everything to save Bas.”

“Because you asked me to!”

“Bullshit. That’s bullshit, and you know it.”

Ten opened his mouth to say something else but Morgan interrupted him. “Tamp it down, Pinkerton. We’re here,” he said as he put his car in park and shut it off. He turned in his seat and pinned Ten with a look that said listen very carefully, so Ten did.

“Don’t do or say anything in there unless I tell you to. Stay with me. Don’t touch anything, don’t, just don’t….”

Ten smirked, “Yes, Dad. Can we go into the secret clubhouse now?”

“This is not a fucking joke, Ten. Anyone in this building could kill you between heartbeats and there wouldn’t be a damn thing that I could do to stop it. Do you hear me?”

Ten dipped his chin, the smirk long-gone from his face, “Yeah, Morg, I get it.”

They both climbed out of the car and Ten frowned when Morgan didn’t lock it, “You’re not locking it?”

“They’re going to search it while we’re inside and when we leave so there’s really no point.”

“They can break into your car that easily?”

Morgan shook his head, “These people can do anything they fucking want to, Ten. How can I convince you of that?”

“Okay, Morg, okay. I get it. I promise, I get it,” Ten said as he walked over to Morgan and touched his tense shoulder.

Morgan took a deep breath and sighed it out, “I hope so, Ten. I really hope so,” he said and then together they began walking to the front door.

I was born and raised in the Bay Area of Northern California but have made my home in the Pacific Northwest for the last two decades. My husband & I live on a small farm surrounded by chickens, goats, rabbits, a turkey, 5 dogs and a cat, in the shadow of stunning Mt Rainier.

With my grown children and grandchildren nearby, my life is always busy, happy and full of laughter.

I am an active Blogger, having created Love Unchained Book Reviewsout of my love for all things MM books.

When I’m not on the phone with my best friend (which is at least once every day) – I am an avid, addicted reader. It is my passion, my escape, my joy.
And I am most definitely a writer. The characters in my head are constantly demanding that their story be told.
But above all that - I am a human being. My passion for people is unparalleled, my firm belief in Love is Love unwavering, my hope that all can be accepted, undying. I do not write because I want to, I do it because I haveto. I write because these voices, these beautiful men, have chosen me to tell their stories – and how damn lucky am I for that?

As an author, I write under both my name and a pen name, with total transparency and honesty:

Author of the wildly popular ‘Healing Hearts’ series (Love in the Aftermath, Love After Chaos, Love Worth Fighting For – and more to come soon)

“This is not your average romance story. It is so much more. A book that touched my heart.”

“OMG!!! This was probably one of the best books I've ever read.”

“This is the first time I've read anything from Dara Nelson, but it won't be the last. I need more of her writing!”

Under the pen name Kendel Duncan:

“I HIGHLY RECOMMEND THIS BOOK AND THIS AMAZING SERIES!!!!!”

“I love how you keep the story going and keep all the characters interesting. Can't wait for the next book!”

“The emotions are so raw and just I don't have the right words to express how amazing the books are. You have to read them to understand. I can't wait for the next installment!!”