The Fox, The Dog, and The King by Matt Doyle - Release Blitz with Excerpt and Giveaway

New Hopeland City may have been built to be the centerpiece of the technological age, but some remnants of the old world still linger. The tools of the trade have changed, but the corruption remains the same, even in the criminal underworld …

When PI Cassie Tam and her girlfriend Lori try to make up for their recent busy schedules with a night out at the theatre to watch the Tech Shift performer Kitsune, the last thing they expected was for Cassie to get a job offer. But some people are never off the clock, and by the end of the evening, Cassie has been drawn into a mundane but highly paid missing pet case. Unfortunately, in New Hopeland City, even something as simple as little lost dog can lead you down some dark paths.

Until now, Cassie wasn’t aware that there even was a rabbit hole, let alone how far down it goes.

The Fox, the Dog, and the King
Matt Doyle © 2018
All Rights Reserved

Chapter One
“Caz! Be careful!” Charlie lets out an exasperated sigh, and adds, “Those are new cushions.”

I stop wiping the freshly spilt coffee on my trouser leg with my hand and give her an only partially serious indignant look.

“What? You can handle a bit of caffeine, the material can’t.”

“Terribly sorry,” I reply, relaxing back into Charlie’s couch. I raise my mug daintily to my mouth and take a sip, complete with a raised pinkie finger, then place the mug gently back onto the coffee table between us. “Better?”

Charlie almost gags on her own coffee as she tries to stifle a laugh and ends up dribbling some of the molten goodness down her chin.

“Oh, do be careful, Charlotte. These are new cushions,” I say, throwing in my best mock posh tone.

And now we both laugh, the sound bringing with it warm memories of times long gone.

The woman opposite me, Charlotte Goldman, is one of the top synth stimulant dealers in the city—an Elite Seller in fact. She’s also my ex-girlfriend. We only dated for a year but our breakup, while not what you’d call nasty, shook me and left me far too snarky to be dateable for a long time afterward. Then, Lori Redwood came knocking. She hired me to investigate her brother Eddie’s death. He was a VR junkie, and I honestly thought that the case would be simple when I took it. It wasn’t. For many reasons.

Somehow, Lori managed to break through my previously impenetrable walls, and one of the positive changes that she’s set about making in my life since we started dating is to make sure I reconnected with Charlie. I’m grateful, but I don’t think her intentions were entirely pure. Our now mutual friend, Jane, once told me that Lori had a habit of dating assholes. Part of me thinks that having me talk her up to my ex, who, if I’m being honest, I was still a little hung up on, is a way of boosting her own confidence in us. I could be wrong, of course. It has, unfortunately, been known to happen from time to time.

No matter what Lori’s reasons were, I am glad she did it. I’ve missed Charlie. Missed the way she makes me feel when I’m around her. Up until recently, I thought that was entirely due to the romance, but looking at it now, I know that I was wrong. I would be lying if I told myself I could look back on it and say we were never suited in that way, but the things I missed the most don’t need romance thrown in. Relaxing over a hot drink, catching up on what we’ve been up to, that sort of thing.

“And what’s that smile for?” Charlie asks, smiling wickedly with the question.

“I was just thinking about how much I’m enjoying being able to kick back around someone and be the person who isn’t an investigator for hire, stuck in the middle of something potentially nasty.”

Charlie lets out a short, gentle laugh and pushes her long auburn hair back behind her ears. “Having trouble opening up around Lori, huh?”

“It takes a while with me. You know that.”

“Yeah. I had, what? Three, three and a half months of grumpy Miss Sleuth until you started relaxing properly around me?”

I nod. “Honestly, I’ve just been so busy since the Locke trial that I haven’t had as much time with her as I’d like.”

“And yet you’re making plenty of time for me,” Charlie replies, shaking her head sadly.

“Lori works, too. We talk a lot, but meeting up is the difficult bit. I’m heading straight there from here, though. We’re gonna make a night of it. You just happened to be on the way,” I add with a cheeky wink.

“Oh, I bet you are.” Charlie laughs, ignoring my jibe. “Does she have something picked out for you already? A nice little PVC one-piece, perhaps?”

I sigh and drop my face in my hands. At some point, Charlie realised that she knew a few people who knew Lori. Then she found out that Lori frequented Tourniquet, the late-night cafe where we had our first date. It’s a nice place: good food, good drink, good prices, all you could want, really. But, as soon as Charlie discovered that its primary patrons are members of the local fetish scene, her mind went straight to PVC and leather, and she decided that would make great material to crack jokes at my expense. Yes, I am glad Lori helped me reconnect with Charlie. At times like this, though, I could kill her for it.

Rather than push ahead with her assault like she has the last couple of times, Charlie goes quiet for a moment. “Caz, were you into stuff like that when you and I dated?”

“No. I never even thought about stuff like that when we were together.”

“I thought not.” She smirks. “You’re a relationship chameleon.”

I look up, sure that my face is a picture of confusion. “A what?”

“A relationship chameleon. It means that you change when you’re dating someone and become more like them. Like how you were into retro rock when we met, and then suddenly took a major interest in jazz when you found out that I like it.”

“I just never gave jazz a chance before,” I groan. “And I still like retro rock. Besides, everyone changes a little when they’re in a relationship.”

“True.” Charlie nods. “We all adapt or pick up little things here and there. I, for one, learned how to comfort a big, scary detective who’s a massive wuss when it comes to jump scares. You change a lot, though. Do you remember how you told me about changing your drinking habits when you were dating what’s her name…uhm…” Charlie clicks her fingers, trying to remember the name.

“Dani,” Charlie repeats, pointing a finger at me in triumph. “You barely touched alcohol until you met her, but by the time you’d started seeing me you were drinking at least one beer a night. I bet you still do. It’s not just habits, though; your personality alters too. You were really shy when we first met, then while you were with me, you started adopting some of my snark. From what you told me about how you were in your youth, I reckon you got the shyness from someone else.”

“Or maybe your snark is catching?”

“I prefer so lovable that people can’t help but imitate it, but I’ll take it. And when we split, you reverted to a mix of moody and shy. It was like you didn’t know where to focus yourself anymore. And now you’re suddenly a bit more confident and…I dunno, jokey.”

“Maybe I was just miserable alone, and now I’m happy again?” I try.

“Or maybe you’re adopting some of Lori into yourself. Caz, I can tell when what you’re saying is you and when it’s something else you’re trying to take on. I always could.”

“Charlie, I’m happy. Is that really that bad?”

“No, it’s not. And I am glad that Lori’s convinced you to reconnect, I just don’t want you to get yourself hurt. We didn’t work out, but I do care for you. Promise me that if she tries getting you to do anything you don’t feel comfortable with you’ll say no, OK?”

I frown. “She’s not like that. She won’t try to force me to do anything. What’s brought all this chameleon stuff on, anyway? You’ve never mentioned it before.”

“I kinda wondered about it before, but…I just realised something, that’s all.”

“Well, when I mentioned the PVC thing, you…”

“I, what?” I prompt, and immediately start to regret it.

“I could see it on your face. You weren’t entirely opposed to the idea.”

My cheeks start to flush, and my mouth drops open in shock, unable to form a smart-ass retort. Hell, I can’t even manage a stupid-ass retort at this point.

Charlie laughs, and it’s a long, whooping laugh that spills into her words. “It’s a good job that she thinks you’re cute when you’re embarrassed because you are so going to be blushing a lot when you two get out of first gear.”

“Gee, thanks,” I groan. With all the amusement I’m giving people lately, I’m beginning to wonder if I should consider switching careers and becoming a stand-up. I glance over at the clock on the wall. It’s a hybrid model that works with modern digital tech but built to resemble an old pendulum piece. They’re all the rage right now, or so I’m told. From the way the video display just jumped, I think Charlie’s might be broken. A quick check of my phone confirms that the time is right, at least.

“I better head out,” I say, getting to my feet. “And your pendulum just jumped, by the way. You may want to get that checked out.”

“Oh, it does that.” Charlie smiles, rising to walk me to the door. “I’ve had it checked over three times now and there’s no faults. It keeps the right time, so I’ll forgive it a few little visual blips.”

“Thanks, Charlie. It’s been a fun afternoon.”

“It really has. And don’t worry too much about the chameleon thing, I am half joking. I don’t expect you to be having the Tech Shift op any time soon, at least. Although…they do say that everyone starts to resemble their pets, right?” 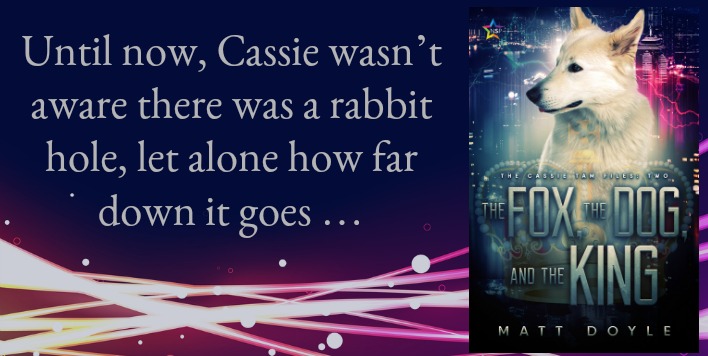 Matt Doyle lives in the South East of England and shares his home with a wide variety of people and animals, as well as a fine selection of teas. He has spent his life chasing dreams, a habit which has seen him gain success in a great number of fields. To date, this has included spending ten years as a professional wrestler, completing a range of cosplay projects, and publishing multiple works of fiction.

These days, Matt can be found working on far too many novels at once, blogging about anime, comics, and games, and plotting and planning what other things he’ll be doing to take up what little free time he has.