The Case Of The Sexy Shakespearean by Tara Lain - Release Day Blitz with Excerpt, Giveaway, and Review 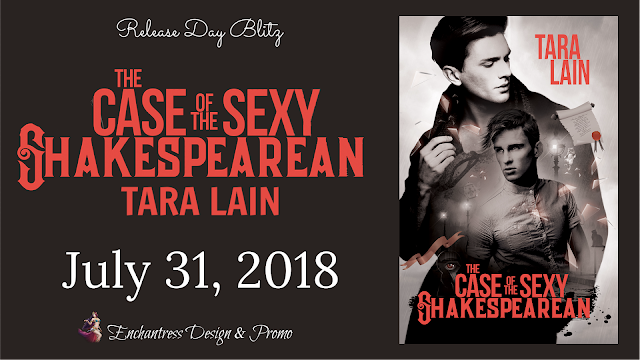 A cozy mystery with a tongue-tied nerd of a history professor tempted by a gorgeous graduate student and millions of dollars if he can solve one of history's greatest mysteries -- who was Shakespeare really? 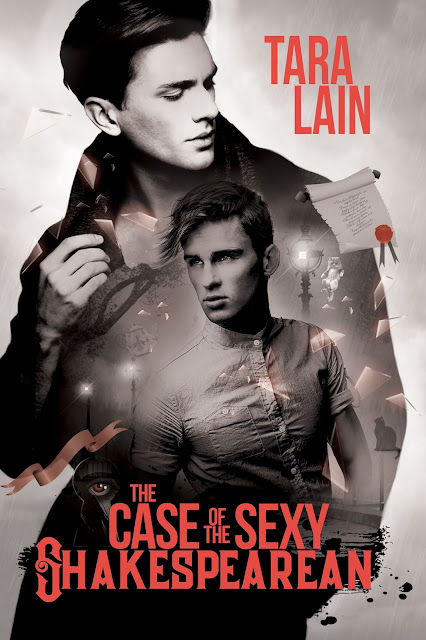 The Case of the Sexy Shakespearean
by Tara Lain

Dr. Llewellyn Lewis leads a double life, as both an awkward but distinguished history professor and the more flamboyant Ramon Rondell, infamous writer of sensational historical theories. It's Ramon who first sets eyes on a gorgeous young man dancing in a club, but Llewellyn who meets teaching assistant Blaise Arthur formally at an event held for wealthy socialite Anne de Vere, descendant of Edward de Vere, seventeenth Earl of Oxford-who some believe was the real Shakespeare. Anne wants Llewellyn to prove that claim, even though many have tried and failed. And she's willing to offer a hefty donation to the university if he succeeds.

It also means a chance for Llewellyn to get to know Blaise much better.

Not everyone thinks Llewellyn should take the case-or the money. Between feuding siblings, rival patrons, jealous colleagues, and greedy administrators, almost anyone could be trying to thwart his work... and one of them is willing to kill to do it.

When Anne de Vere turns up dead, the police believe Blaise is the murderer. Only the shy, stuttering professor who has won his heart can prove otherwise...

Excerpt
Well, damn. He slowly released a breath and took another as Blaise Arthur appeared in the kitchen doorway.
Blaise looked from Llewellyn’s face to his hand, just inches from grasping the handle of a butcher knife. “Whoa. Hang on, Jim Bowie. Sorry to scare you. Your door was standing open, and I was a little worried that you’d decided to run for Alaska or hang yourself by one of Van Pelt’s neckties.”
A laugh bubbled up from Llewellyn’s belly. That description so perfectly described his options, he just kept chuckling until all three cats looked at him like he was nuts. Marie relaxed her puffed-up fur seemingly one hair at a time, flicked her tail, and returned to her chicken dinner.
Finally he managed to stop laughing. “Uh, how d-did you know w-where I live?”
Blaise cocked his grin to the side. “I followed you, and I must say, I had to move pretty fast to do it.”
What the hell? “W-why?”
“I told you. Suicide prevention.”
Was he disappointed in that answer? He spread his arms. “A-as you see.”
“Feline-feeding duty.”
“I’m a cr-crazy cat lady.”
Blaise leaned against the door, arms crossed, one nicely muscled leg cocked over the other, and a sexy-as-hell grin on his face. “Neither crazy nor a lady so far as I can see.”
“S-so what do you want?”
“There’s a challenging question. Just accept my mother-of-compassion routine at face value and offer me a drink.”
He still frowned. “B-beer? Wine?”
“Beer would be great.”
Llewellyn loved craft beers and took two bottles of Red Headed Stranger from his cooler.
He opened and poured them into pilsner glasses and handed one to Blaise, who stared at the bottle. “Whoa, exotic.” He sipped. “Delicious.”
“From R-Reno.”
“I’ll remember it.”
Llewellyn gestured to the hall and led Blaise back to the big living room with its high ceilings, elaborate crown moldings, and polished oak floors. He sat in an easy chair and indicated that Blaise should sit on the comfortable couch.
Blaise sipped and gazed around. “This is quite a house. How old is it?”
“N-nineteen twenties or thirties.” Why was he chitchatting? What’s he doing here?
“Is it a family home?”
“S-sort of.”
“Are you gay?”
“What?” Llewellyn frowned. “Uh, y-yes. E-everyone knows th-that.”
“Yes, I read it, but I wanted to ask.” He grinned.
The cats padded in, Marie making a straight shot to Llewellyn’s lap, where she turned and stared at Blaise while washing her face and paws.
“She’s the formidable one.”
“Oh y-yes.”
“What’s her name?”
“Marie Antoinette.”
He laughed. “Perfect. Marie, I’ll make it my personal objective to woo you to my side.”
That implied some long-term association.
Blaise took another big mouthful. “It looks like you have a nice life.” He set the still partly full glass on the coffee table and stood. “I’m glad. Thanks so much for the beer.” He walked toward the door. What the hell?
Llewellyn stood, getting a squawk from Marie. “W-why did you ask if I-I’m gay?”
Blaise glanced back over his shoulder. “Because I am.”
“I-I know.” Jesus, why did I say that?
“Am I that obvious?” But he smiled.
Llewellyn shrugged. “No. So?”
Blaise laughed. “See you at work.”

The Case of the Sexy Shakespearean is a new contemporary cozy mystery style m/m romance. This is the first book in a new series by this author.

The premise for this story  a sexy,yet shy/introverted history research professor  is given the task of proving that a specific person was actually the writer behind William Shakespeare. Needless to say the professor is highly reluctant to attempt this mystery. Along the way various things happen to the main character that add bits of depth and create conflict causing character growth for Llewellyn. Also along the way a new English TA introduces himself to Llewellyn and sparks fly between him and Blaise as they go along attempting to solve the mystery that has been added in to the story.

I generally enjoy all of this author's books but I will admit that I had some trouble getting into this one from the start. I still did enjoy the story in the end it was just a little bit of a slower read for this author's usual books. I was truly engaged by the main character, Llewellyn from the beginning of the story. It was the situation itself around the character that made the story feel a little too plot heavy. That's not to say it didn't all work in the end, but it was generally a bit much to wade through at the start of the book.

I also feel like I never got a true picture of Llewellyn outside of his height and slimness. Where I feel that his alter ego Ramon was almost a bit larger than life even when he was just a small part of the storyline. None of this added up to making the book a problematic read, it was just a bit slower paced. Again, still an enjoyable story with engaging characters and a fun and different plot line for a m/m romance with combining the feel of the cozy mystery to the romance. It's a plot line that hasn't been done to the point where it's formulaic. It's still a fresh and unique storyline to keep you reading through to the end.

For those of you that enjoy a good mystery in your romance, The Case of The Sexy Shakespearean definitely delivers on that plot  point. While I did have those few issues, I highly recommend this story as a fun, light romance with a decently crafted mystery woven into the story. Pick this one up for yourself and take a read. 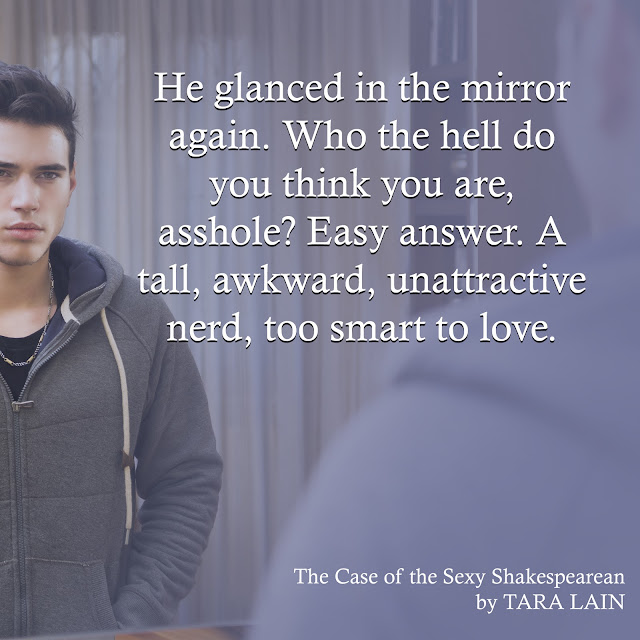 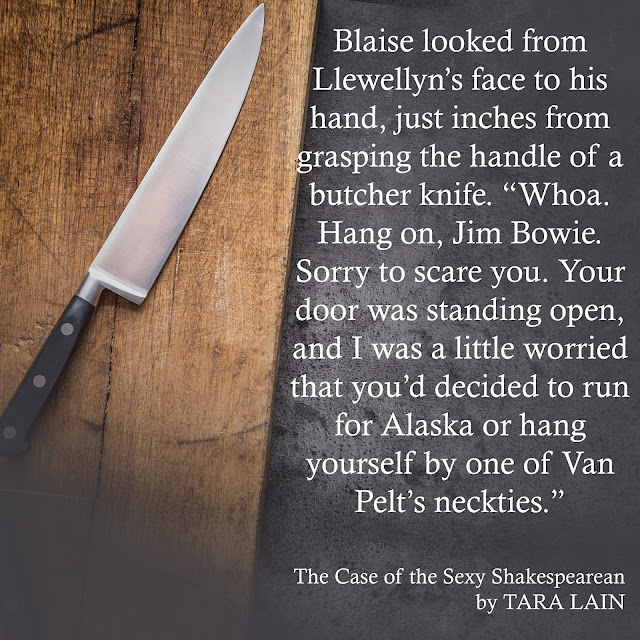 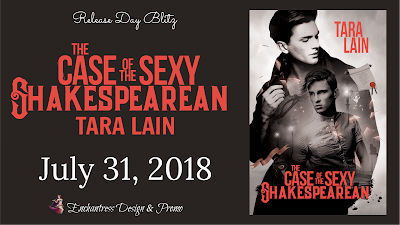