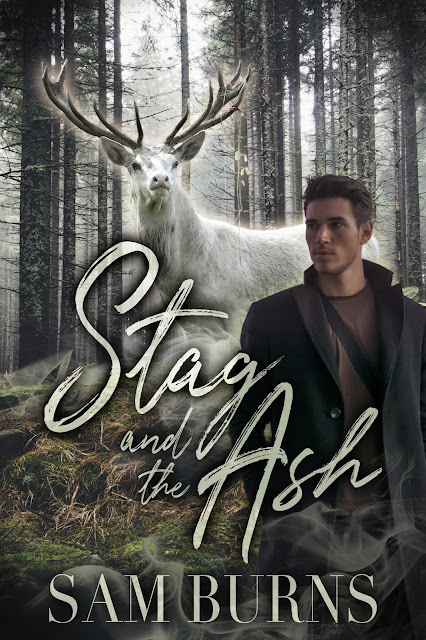 Jesse Hunter is finally trying to be an adult, but it still feels like an act. His place on the town council is a sham. He’s rarely called on to do anything. His boyfriend is grieving the loss of his mother, and while everyone seems to think he’s doing a great job caring for Sean, Jesse feels like he’s more of a distraction than a real help.

March is shaping up to be a bad month. First, random chance leads him to the realization that the town’s recent trouble is his fault. Then new werewolves come into town, and it turns out they’re also Jesse’s responsibility. He feels like he may be at his breaking point, and he doesn’t want to drag his friends and loved ones down with him. But how will he handle it alone?

Stag and the Ash is the 5th book in the Rowan Harbor Cycle and continues Jesse and Sean's story. This story is intricately tied with the rest of the books, so it really is best to read them in order as they are leading to a final conclusion for all the couples and the storyline.

I have to admit that the first part of Jesse and Sean's story was just okay for me. However Stag and the Ash was a much better story for both characters. I do still feel that there is a lot missing from Sean's story though, and I hope that the author has plans to delve into who he is a bit more. Unfortunately the way these stories are set up sharing too much of the plot will give major spoilers so I have to keep most of the story vague. I'm a firm believer in that some stories need to be read to be fully experienced, and urban fantasy stories like this series really fall into that group.

There is so much subtle myth and mythology, along with paranormal lore, tossed in with basic tenets of paganism/wicca that these are the kind of stories that I absolutely love to read. There isn't a true slow part to any of the stories in this series. There is a lot of information and a lot of people/place and action/reaction that really flesh out this series, so far. I don't see that changing in the remaining books. As I said above though, this is really a series you need to read in order to get the full effect of what is developing with both the characters, the plot, and the surrounding storyline.

I highly recommend this book and this entire series to those that love a good urban fantasy read with a large ensemble cast.

If she’s not writing, she’s almost certainly either reading or lost down a Wikipedia rabbit hole while pretending to research for a novel.