Ace In The Picture by Jude Tresswell - Release Blitz with Excerpt

Book Title: Ace in the Picture

It can be read as a standalone, but is also the third book featuring the County Durham quad


An art fraud, a polyamorous suspect, an asexual detective…

Polyamory and asexuality meet in this third tale about a north-east England quad.

The police suspect Raith Balan of faking a painting. So do money-launderers who sink profits into art. Mike, Ross and Phil, the three men in Raith’s life, must prove his innocence. They’re hampered by their certainty that a member of the Fraud Squad is corrupt.

The senior investigating officer is Detective Sergeant Nick Seabrooke. He knows he is asexual, but is he aromantic too? As Raith’s lovers struggle to keep Raith safe and find the fraudster, the sergeant struggles to understand why the quad is often in his thoughts.

Raith stood in the kitchen in front of the calendar. His gaze shifted from the naked figure depicted on ‘October’ to the highlighted ‘Thursday 12th’ and back again. He pressed a fingertip to his lips, transferred a kiss to the mid-point of the figure’s shoulder blades and ran his finger down the spine—Mike Angells’ spine.

The real-life Mike walked into the room and filled the kettle.

“What are you admirin’?” he asked. “The model or the artist?”

Raith was the artist. “The artist,” he replied. “He’s classy. The model’s okay, I suppose.”

Changing the subject, Raith asked, “You know what day it is in two days’ time, don’t you?”

“In two days? Well, let’s see… difficult one… It must be Thursday. Aye, that’s right. It was Monday yesterday, so—”

“Stop teasing me! Do you think he’s forgotten?”

‘He’ was Phil Roberts, the man Raith had married 364days earlier.

“And that’s two cups of coffee. One for you. One for me,” said Mike, handing over a mug.

“None for me?” asked a third man who, yawning, had entered the kitchen. He hugged the two men already there.

“Sorry, Ross,” Mike apologised. “I didn’t make you one. I thought you were still asleep.”

“No. Just dozy,” said Ross sleepily. “I heard Phil’s car. Is it an emergency, Raith?”

“Not exactly,” Raith replied. “He went in early to cover for a colleague.”

Phil had helped to pioneer a form of rectal surgery that used nanocarbon patches to reconstruct torn tissue. He was a respected consultant at the hospital an hour’s drive away in Warbridge, County Durham.

“I’d better get sorted and get out myself,” said Ross. He was, amongst other things, a gallery proprietor in Gateshead, and his journey to work took longer than Phil’s. He yawned again.

“I’m dead tired cos I didn’t sleep well. I had a strange text late on. You were already asleep. I don’t think you heard the phone buzz. Strange. Unsettling.”

“How do you mean?” asked Raith. “We’re not going to get involved with more criminal activities, are we? I had enough of crime fighting last time!”

Even though Mike was no longer a detective with the Tees, Tyne and Wear Constabulary, the four of them were involved in a surprising amount of crime fighting. ‘Last time’ had involved an illegal immigrant, and the tensions that had arisen had threatened the survival of the quad.

That’s what they were: a gay, polyamorous quad. They lived in Tunhead, a hamlet in Weardale in the Durham hills. Once, Tunhead had rung to the sound of workers’ hammers hitting stone. In a way it still did: Ross had turned it into an arts centre full of smiths, sculptors and potters who wanted to escape the North East’s towns.

“Good. Well, my creations won’t create themselves. I’d better get off, too.”

In Raith’s case, ‘getting off’ simply meant walking twenty yards to his studio, a converted storehouse.

“You sure he hasn’t forgotten?” he asked Mike again before he left.

“What’s that about?” asked Ross after Raith was gone.

“I know he hasn’t. He’s takin’ him off on a trip sumwhere—but you know Raith. He needs everythin’ crystal clear and written in capital letters. And sumtimes, so do I. What was this message about?”

Ross pulled a face and explained. When he’d done so, Mike could understand his concern.

The message stayed in Ross’s mind during the forty-mile drive to the gallery and he couldn’t forget about it once he was there. Some of Raith’s paintings hung on the gallery walls. They were mainly of Weardale’s waterfalls. After heavy rain, the falls transformed from gentle trickles into rushing, gushing powerful forces of nature that the four men knew could kill. They’d seen them kill.

Raith loved to paint the waterfalls. From a distance, his torrents looked alive. The effect was linked to his use of colour. Raith was a tetrachromat; he could see a host of hues in what, to most people, was a single shade. He painted for himself, though, not for fame or money—he had plenty of both, due to his skill with clay not brushes. Several of his wares were on show at the gallery, most tagged ‘sold’ with a price that would feed and clothe all four men for a long, long time. His sensually erotic sculptures, modelled on Mike and Phil, were always in demand and beautifully, lovingly executed. But today, Ross gave Raith’s erotica a miss. He stared, instead, at the waterfalls.

What might induce Raith to produce a piece of work “with intent to deceive”, as the legal phrase was?

That was what the worrying message had suggested. That Raith’s were the hands and eyes behind a painting that the police were interested in. They thought it was a fake. For the umpteenth time, Ross asked himself why?

Raith didn’t need fame and he didn’t need fortune, but did he need the challenge of outwitting the experts? Of copying another artist’s work so accurately that no one would notice the difference?

Surely not. Momentarily, Ross’s dark mood lifted. The only challenge Raith was likely to rise to was the one of finding ways to spice up the quad’s evening meals. Two nights ago, he’d ‘accidentally’ stumbled near the saucepan with a teaspoon of chilli flakes in his hand.

Ross smiled when he thought about it, but anxiety soon returned. Could Raith be feeling resentment? Sometimes, that was the driving force behind a fraud. Failed artists whose work had been refused once too often. Failed artists who took I’ll show them!literally.

No. All Raith’s resentments were little ones that quickly blew over—feeling nagged for not doing his turn on the house-keeping rota, being yelled at for leaving clay-covered dirty washing on top of the pile of clean laundry. Raith took umbrage easily, but he’d be smiling again within the hour. And anyway, he wasn’t a failed artist. He was a very successful one.

He was a strange mixture though. That complexity was part of his attraction. It was part of what made him Raith. His skill was undeniable, but his mental health was fragile— ‘bloody unhinged’ was how Mike would describe Raith in less charitable moments. He could be unpredictable. He could be very violent. He had another side, though, and it was what Mike and Phil and Ross adored about him. Canny, clued up, an ex-con hard as nails… but at the toss of a coin, as loving, as sweet and as trusting as anyone they had ever met. Mike was as loving, and often as sweet, but trusting? No. Mike was ex-CID. It wasn’t in his nature to be trusting.

Which was why Mike was already making phone calls.

I’m not Nick Seabrooke, the ace in the picture, but there are some firsthand truths peeping through the fiction. Like Nick, I’m ace and happy with it, but also, like Nick, I’m wavery on that ro/aro line–and that can cause some soul-searching. If the picture painted in the story is a very narrow one, it’s because I didn’t want to stray too far from what I know. The quad, however, are totally imaginary.

I blog at https://polyallsorts.wordpress.com. There are posts about asexuality, polyamory, beer, tattoos, book covers, and many other story-related items. There are photos of the Durham countryside, the setting of the stories, too. I’m always happy to receive and respond to comments. Well, if they’re friendly ones! 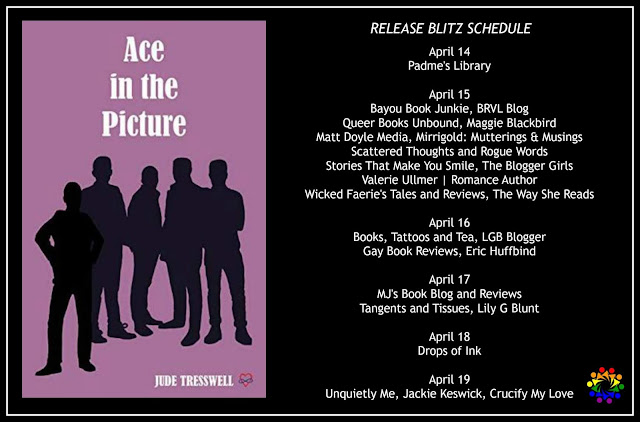