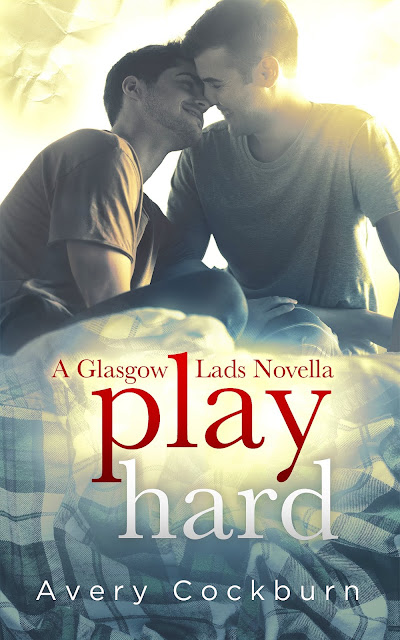 The Glasgow Lads series centers around an all-LGBTQ football/soccer team in contemporary Scotland. Though the series has an overarching storyline, each novel features a new couple and a happy ending, so they can be read in any order. The series also includes a prequel novella and two (soon to be three) "happier-ever-after" followup stories.

“I’ll always want more of you.”

Robert McKenzie lives to work. He’s fresh out of university as a video-game entrepreneur, and his new app could actually save lives. But burning the candle at both ends means missing out on the best parts of his own life—including his boyfriend, Liam.

Liam Carroll works to live. His job as a bartender pays the rent—if not always the heating bill—and that’s plenty for now. But Robert’s workaholism reminds Liam his own life is going nowhere, and his own dreams are scaring the pants off him.

To jolt them out of their ruts, Robert invents a new game: He and Liam are to take turns offering each other sexy new challenges with irresistible rewards.

Of course, Robert gets more than he bargained for, as Liam takes their game in one surprising direction after another. Whether it’s in the bedroom, on the football pitch, or at the pub (or even the supermarket?), the things they learn about each other—and themselves—could change their lives forever.

Note: This happier-ever-after novella features the main characters of Playing With Fire but can be read as a stand-alone story.

Robert didn’t join Liam in the shower, partly because it was too small to fit a pair of men their size, but mostly because he wanted to watch.

Built into the corner of the bathroom, the shower’s glass walls were fully transparent, not smoky or marbled or made otherwise translucent for privacy’s sake. So there was nothing to obscure the sight of Liam’s naked body.

Fully dressed and standing in the opposite corner, Robert simply observed. If Liam had been craving his undivided attention, he was about to get it in spades.

They’d showered together many times, but he’d never noticed how Liam wet the bar of soap by lifting it into the water spray much farther than necessary—at nearly throat height—and turning his face aside to avoid the resulting splash. Did he think the soap got wetter faster by putting it closer to the shower nozzle? Perhaps it was a habit borne of the poor water pressure in his childhood flat. Robert remembered it well, as he’d lived with the Carrolls for ten months when he was sixteen, between the time of his father’s death and the start of university.

“You’re staring.” Liam’s voice echoed against the green tile walls. He met Robert’s eyes as he soaped his broad, well-muscled, and thoroughly freckled chest, then swept his fingers up beneath his rib cage to emphasize his abs.

“I know.” Robert licked his lips as Liam used one sudsy hand to stroke his cock and the other to reach back between his cheeks. Soon he would taste Liam everywhere, tracing his tongue over each angle and curve as if for the first time. He would erase the doubt from this man’s mind and replace it with the certainty of endless adoration.

Robert stepped forward with it, stopping just out of Liam’s reach. “Come here and I’ll dry you.”

Robert started with his head, scrubbing the red hair that had turned nearly black in its wetness, then worked his way down—quickly, because Liam was shivering.

He finished with Liam’s feet, then folded the towel and set it on the floor.

“What are you—ah,” Liam said as Robert knelt upon the damp towel. His next utterance was a gasp, in response to Robert nuzzling his balls. “Okay, this is seriously hot with me naked and you completely dressed.”

Robert drew his nose against the right side of Liam’s sack. “You smell good. I wonder how you’ll taste.”

Liam gripped the sink to his right. “Gonnae find out?”

“Aye,” Robert said with a heavy breath against this most sensitive skin. Liam’s cock jerked, begging for equal time.

Robert licked a line up the center of Liam’s sack, then flicked his tongue back and forth between his balls, as though deciding which to try first. He chose the left one, wrapping his lips carefully around the warm mass that seemed to half-melt in his mouth, suspended in a state between solid and liquid.

He lifted his chin to watch Liam, whose lips and cheeks were flushing pink, just as they’d done when he’d come in from the cold at the Tesco. Liam’s chest began to heave with his quickening breath, ribs expanding and contracting the solid planes of his torso, the planes that always made Robert’s palms warm and tingly.

He reached up now with his right hand, his left steadying Liam’s trembling thigh. He slid two of his fingers round one of Liam’s scarlet nipples and squeezed.

“Och.” Liam leaned back, bracing himself against the wall. “God, look how hard you’re making me.” He touched his other nipple, mimicking Robert’s tweaking fingertips. “I could almost come like this.”

Robert shook his head slowly, maneuvering his tongue over the contents of his mouth.

“Aye, I could,” Liam replied. “Unless you do something different.”

Robert pulled away enough to say, “Turn around.”

Hiya, I’m Avery Cockburn (rhymes with Savory Slow Churn). Under my real name (Jeri Smith-Ready) I wrote over a dozen novels for major publishers. As an indie author, my days are filled with beautiful men who play beautiful games in the most beautiful place in the world. Thanks to my pure awesome readers, it's pretty much the best job ever.

I live in the United States with one infinitely patient man and two infinitely impatient cats. Join my quarterly-ish newsletter at www.averycockburn.com/signup to receive a free book plus loads of exclusive bonus material. Cheers!